Are mobile apps the key to driving in-store impulse sales? 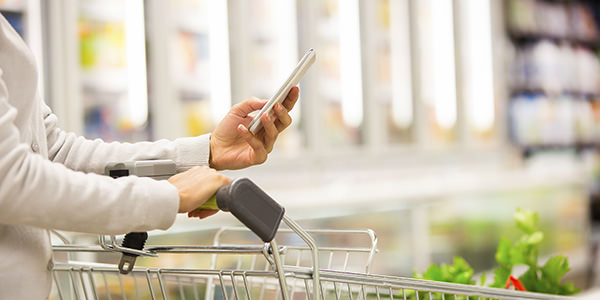 Not so surprisingly, a university study finds impulse shopping notably increases the longer a customer is in a store. A newsier revelation is that mobile apps may be the way to drive many unplanned purchases.

The authors claim this is the first study to examine changes in impulse shopping as the shopping trip unfolds. About 400 customers carrying handheld scanners at two grocery stores were examined.

The findings suggest that retailers might consider offering unplanned suggestions later in the shopping trip, such as via in-store sampling or other in-store promotions. But the authors particularly highlight how mobile-apps could trigger unplanned purchases.

Tapping past data around planned and unplanned individual purchases as well as a shopper’s in-store proximity, apps can keep track of shopping and allow the retailer to make targeted suggestions. Shoppers are also often found to be highly receptive to offers for a "fun" unplanned item following several purchases of planned "less fun" items, such as providing a coupon for ice cream after a shopper has picked up some milk.

Still, University of Notre Dame marketing researcher Timothy Gilbride believes retailers will have to decide whether they want to "play the long game" and use shopper information and emerging technology to enhance the overall shopping experience. Retailers might try to help consumers to stay on their budgets while still suggesting unplanned items or simply trying to encourage them to maximize the total number of purchases on any given trip.

He believes retailers are seeking to build relationships that are "more than just transactional" in nature with the help of shopper data.

"They recognize that consumers could potentially have a relationship with the store for as long as they live in their current houses," Prof. Gilbride told National Association of Chain Drug Stores. "This will prompt the retailer to ask, ‘What can I do to make your shopping experience better over the long-term, as opposed to just this one shot?’"

Do you see mobile apps evolving into the preferred way to drive in-store impulse purchases, other than via the checkout aisle? What are the risks around making mobile messaging pitches to shoppers while in aisles?

Please practice The RetailWire Golden Rule when submitting your comments.
Braintrust
"Mobile is a double-edged sword for in-store retailers. As soon as you have customers pulling out their mobile you open a door to a lot of things, including some beneficial and many counterproductive to your cause."

"Yes, mobile apps CAN drive large sales increases, through what I call interstitial sales—selling in the blank spots between other sales that are going to happen anyway."

"No, mobile apps are not a preferred way to drive in-store impulse purchases. POP, location, price (on shelf), are all much more important, and have a proven history of success impacting shoppers for impulse purchases."

12 Comments on "Are mobile apps the key to driving in-store impulse sales?"

In a store that uses a frequent shopper loyalty system, it will be a great benefit to both the shoppers and the retailer. Reminding consumers of items on sale, items they purchased in the past that may be needed and related items to the item just purchased can all be of benefit to the consumer scanning with their mobile device as they shop. Even if not using the device to scan purchases, the technology in a few short years will detect where a shopper is in the store to send them messages that will help a consumer. Now if the shopper does not want to be “helped” while they shop there could be a button to stop all messages. A big risk is the “pain in the neck” feature from too many messages per shopping trip. A good application can detect what items have been purchased or scanned during the shopping trip to determine if the trip is for weekly shopping or for only a few items. This will also help with the number of… Read more »
0
|
0
-   Share

A survey of 400 shoppers does not represent consumers as a whole. I agree that mobile apps can help consumers while offering additional items for purchase, but if retailers get too aggressive in suggesting additional purchases they will turn off consumers. If retailers want to build loyalty their apps should, as Mr Gilbride suggests, use shopper information to enhance the overall shopping experience, not just push more products at shoppers. Retailers: Use mobile and social as sales tools at your own peril.

Mobile is a double-edged sword for in-store retailers. As soon as you have customers pulling out their mobile you open a door to a lot of things, including some beneficial and many counterproductive to your cause. On their mobile devices, shoppers can be influenced by other retailers as well as be distracted by their social circles.

An insight I learned years ago from a visual merchandising executive at a big box retailer was simple logic: 1.) The longer a shopper is in my store the more she will purchase. 2.) She’ll stay in my store longer if she is happy. 3.) If I can make my shopper happy, she’ll stay in the store longer and purchase more. Using this simple logic as a foundation, retailers and brands alike should figure out which of media-based communication technologies in the broad portfolio of available options will provide a means to keep a shopper happy and in the store longer. I believe there are much better alternatives for providing immediate, relevant and valued information and/or marketing communication onto their mobile devices than using apps. With a few exceptions (Starbucks) apps simply are not as successful as the interactive and mobile developers claim. A recent survey conducted by Google/Ipso of over 8,000 shoppers found that one in four apps installed are NEVER used. Typical mobile apps are not convenient for the large majority of shoppers.… Read more »
0
|
0
-   Share

Once we get to the point of self scanning that translates into payments, I suggest retailers think more about in-store digital. There are certainly those who will open an app to see what might be on sale, but having to get out your phone, turn on the app, use up your battery to scan an item for information? Not so much.

Now don’t get me wrong, there may categories such as grocery that may fair well here. Especially for those who keep lists and actually use the app. These budget conscience shoppers are often just the ones who want to see a deal that might allow them to pick up another impulse item.

My recent impulse purchase was driven by a random conversation with someone in the store who was raving about a particular product.

Finding a way to weave customer stories into the shopping experience, not just reviews, can be a helpful retailer intervention. The store is a place where people go for ideas and solutions—these creating lasting meaningful memories. I think a focus on impulses takes our creative energy in another direction.

Impulse sales items are usually products with no investment risk that serve best to gratify the main product categories offered, or the customers. Brick & mortar stores use standalone aisle displays, end caps and checkout to present the products. E-commerce stores are struggling with this need as seen in their search for success. Determining what type or make of software to use is secondary to the offerings and where they are placed. Any and all software for e-commerce sales must have the flexibility of product additions and replacements as well as site location. Add to cart for checkout must be one-stroke easy for optimum success. Looking to improve something that does not exist, like e-impulse sales, will work better when we find initial successes. This is true for e-store shoppers that bump into things all day long looking at their smart phones instead of watching where they are going. This means we must stop thinking that e-commerce is out of stores only. People use e-commerce everywhere, every day. This makes the e-solution an all-in-one site… Read more »
0
|
0
-   Share

Yes, mobile apps CAN drive large sales increases, through what I call interstitial sales—selling in the blank spots between other sales that are going to happen anyway. See: “‘Googling’ the Store“. But NO, hand-held devices (where apps live today) are not likely to achieve much in increased sales, across the shopping crowd. With the pathetic overall results from hundreds of millions invested in this strategy, it should be obvious by now that the smartphone approach is going nowhere soon. In fact, Google Glass was a better harbinger of potentially fitting in, nearly seamlessly into the shopper’s life. But it was too intrusive and geeky to ever succeed, as in its original roll-out, but it still might have legs. What is far more realistic is the Apple Watch. The reasons behind all this are the need to connect the nearly infinite power of the cloud to your person. You can work on the app from the cloud point of view till you’re blue in the face, but the roadblock is the linkage to the shoppers mind,… Read more »
0
|
0
-   Share

A loyal customer will appreciate a mobile app that connects them to the retailer. The key is acceptance first, then usage second. Acceptance comes from trusting that the retailer won’t abuse the privilege of “talking to me” while I’m shopping—and when I’m not. Second is usage, which will start with training the customer to use the app. The biggest risk is abusing the privilege. Too much promotion and you may get more than the app being turned off. You may turn off the the customer, as well—the exact opposite of what you’re trying to achieve.

No, mobile apps are not a preferred way to drive in-store impulse purchases. POP, location, price (on shelf), are all much more important, and have a proven history of success impacting shoppers for impulse purchases.

When it comes to driving in-store impulse purchases, “AIM” (Aggressive Item Merchandising) and building impactful features like end-caps are still part of the art and the science of GMS and mass retail merchandising (not only to drive impulse at that spot in the store, but also to help pull shoppers in and down that shopping aisle, etc.). Personalization, targeted discounts based on loyalty and preferences, etc., enabled by mobile apps/technology and customer data can/will play a material role in the “brave new world” of driving retail impulse purchases. But retailers still need to step it up when it comes to putting the infrastructure upgrades in to place to enable all this. At last check, only 40 percent of retailers actually have in-store Wi-Fi programs deployed.

We’ve just scratched the surface of what mobile apps can do. By nature they are singularly purposed and can conveniently help customers shop. In the future we will find many other ways they can improve the shopping experience. Hopefully, in-aisle pitches will coordinate with trusted apps already on the consumers’ mobile device.

Braintrust
"Mobile is a double-edged sword for in-store retailers. As soon as you have customers pulling out their mobile you open a door to a lot of things, including some beneficial and many counterproductive to your cause."

"Yes, mobile apps CAN drive large sales increases, through what I call interstitial sales—selling in the blank spots between other sales that are going to happen anyway."

"No, mobile apps are not a preferred way to drive in-store impulse purchases. POP, location, price (on shelf), are all much more important, and have a proven history of success impacting shoppers for impulse purchases."