Are moms too busy for in-store ads? 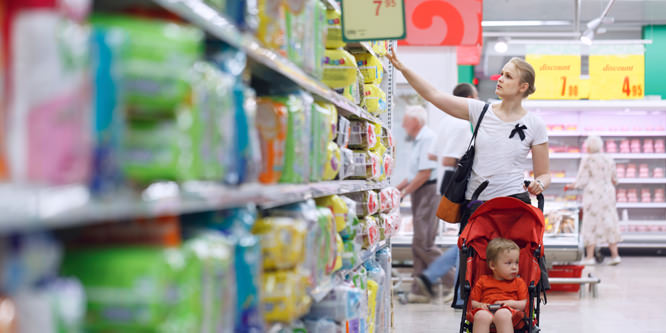 Marketers have long sought to influence grocery shoppers at or near the point of purchase, whether through traditional or digital ads, and yet a new NRF report suggests moms may just be too busy to bother.

A National Retail Federation (NRF) study finds the goal of getting in-and-out and managing kids while shopping are partly to blame for lackluster responses to two in-store ad mechanisms: ads on shopping carts and checkout ads.

The study found that only two in 10 moms are influenced by ads on shopping carts and that ads in checkout lanes persuade only three in 10 moms with younger children to buy.

“No doubt, the challenge of having kids in tow plays a part,” wrote NRF’s authors in their summary.

NRF’s study, based on data from Prosper Insights & Analytics, found that direct mail and coupons play a bigger influence for moms in grocery. Indeed, coupons were found to be more influential with moms than other demographics considered as part of a broader study. Coupons influenced 67 percent of grocery purchases for moms versus about 50 percent each for Millennials and Hispanics and 64 percent of homeowners

Still, NRF found that e-mail and magazine ads were more influential in guiding purchases of apparel, which NRF said was likely because apparel is more of a considered purchase. NRF wrote, “Perhaps the most influence is made when that busy mom can take a focused moment for herself.”

Overall, the study found that, compared to mothers of teens, those with children ages five and under are more likely to:

DISCUSSION QUESTIONS: What do the weak response rates for checkout and shopping-cart ads suggest about the techniques being used to reach busy moms while in-store? Do you think targeted mobile coupons would be effective for busy moms while in the aisle? Should coupons be considered more of an at-home strategic purchase than an in-store impulsive purchase?

Please practice The RetailWire Golden Rule when submitting your comments.
Braintrust
"The concept of influencing shoppers with ads in the store has been around since the mid-’80s and has rarely been successful."

"Heck, we’re ALL too busy to be bothered with ads while trying to get shopping done. Multiply that times 10 if a mom has kids in tow."

"The most important context for purchase decisions in-store is the merchandising, i.e., packages on shelves and other displays of product."

17 Comments on "Are moms too busy for in-store ads?"

I think the reason is ad exhaustion. The customer’s in-store mindset is she is there to save time and make smart decisions based on her typical shopping behaviors. She might be surprised and delighted by a discovery like a new item, but an unrequested ad that is likely not relevant to her list and planned trip through the store is not going to motivate her to veer her cart in order to seek out the deal.

The concept of influencing shoppers with ads in the store has been around since the mid-’80s and has rarely been successful. Checkout ads seem silly to me — I’m leaving the store, not going back for more stuff. There seems to be a general consensus that grocery shopping is a mission, with a variety of missions available, but still a mission. With goal-directed behavior, the salience of anything that interferes with that mission is diminished or more purposely ignored — it blocks the goal. Add shopping with kids to the mix and you only make it worse.

An ad on a shopping cart may be quickly hidden by a child or items in the cart. An ad at checkout is seen too late to impact most planned purchases. Shoppers do not want geo-targeted ads constantly pinging their cell phones. Treat shoppers with respect and help them save time by making it easy to use coupons, check out and get loyalty points through their mobile devices. Clearly mark promotions on-shelf. De-clutter aisles. Speed checkout. Think like a shopper, rather than a marketer.

If three out of 10 moms who view an ad are buying based on checkout lane advertising, that’s still a huge success. The effects of advertising can be more subtle than an immediate purchase. The goal is to plant the seed, the idea of the product, so the customer will make the purchase at a later date. If you’re looking for immediate results, go with coupons or in-aisle markdowns.

Maybe moms are too busy to go to the store at all and more time should be spent by the retailer addressing that issue than more coupons.

How many moms have kids in the cart? Why would you think shopping cart ads would work? If you have kids with you or you are on a tight schedule having to pick kids up or squeeze in a million jobs, would you take time out to get your phone out so you could look at mobile ads? Put the ads on the shelves or on free-standing displays or in a location where they can be read or coupons clicked when these women have time to sit down. Think about what your customers are doing and how they are spending time.

Look beneath the surface of in-store ads and you’ll see that they are intended for branding and to gain inclination for future purposes as as well as in-visit merchandising. So many messages become “glance media.” As such, message composition is a critical success factor, and too often such messaging does not take advantage of the device on which it is being presented. A rotation of static ads will merit (and gain) less shopper attention than a more visually appealing message that includes product features, benefits and advantages — followed by a call to action. Today’s challenge for in-store media is that impact and attribution are typically measured very loosely with all roads leading to the check-out data, which means that the branding focus value of the message gets no credit.

Our work has shown for years that if you don’t communicate before the shopper enters the store, your opportunity to affect them drops considerably.

I tend to think, though, that it’s because shoppers are on a mission. Most need to stay focused on their mission and avoid distraction. And what is more of a distraction than a phone popping up coupons? Especially since those aren’t physical coupons — making them far harder to organize and sort and keep track of. (Was that for an eight ounce tomato paste or 15 ounce?)

In-store media is also used to reduced the perceived dwell time on location. Digital signage is used at check out for this purpose in many retail segments.

Retail that is heavily associate-assisted such as cellular, electronics, sporting goods, etc. use dynamic digital signage as a trigger for “the associate swoop” where based on noticing the customer’s product browsing using the digital sign, the associate will know when to engage the patron to close the sale as well as cross-sell and upsell.

The point is that in-store media is most valuable (and successful) when it is integrated into the visit experience.

Heck, we’re ALL too busy to be bothered with ads while trying to get shopping done. Multiply that time 10 if a mom has kids in tow.

Kim is right. As we do with pretty well everything, we take it to such an extreme that we kill it or at least create a backlash. Facebook has announced that its ad capacity is full. That is such a sad observation for all of us and eventually it will be for shareholders too. Soon we’ll be interrupting ads and commercials to actually do what we need to do or watch five minutes of a program.

Doug is also right about communicating before the customer even leaves for the store. That’s how Safeway’s Just For You program works and works extremely well in my house. We’ll actually make a trip just to get that stuff!

I’m as tired of constant ads as I am this election!

All marketing influences just a small percentage. Two in 10 is a huge percentage.

The challenge remains for offers to be relevant and compelling. If they are both, then in-store and virtually anywhere else can be the right location/time to present the offers. Depending upon the type of physical store, in-store messaging is often a tsunami of messages. However, if the offer is enticing, even busy moms will take advantage. Who doesn’t want to save money?!

I am a believer in context. What’s going on around the shopper when shopping? This article settles in on kids as a distraction. But of course, so are shopping cart ads, i.e., a distraction from the task at hand … buying stuff. So they are often overlooked entirely or glanced at without any processing. The most important context for purchase decisions in-store is the merchandising, i.e., packages on shelves and other displays of product. Typically, that display of product identifies the brand and the price. Effective package designs, marketing and advertising strategies provide instant recognition and on-sight communication at the point of sale. That’s probably enough information for a shopper (mom with kids and everyone else) in-store to make a decision. When thinking about the context at home, consider consumers who look at a newspaper insert to check out coupons. They are viewing the coupons because they are interested in using coupons. It’s another specific context that can influence shopping behavior. And the fabulous characteristic for marketers when it comes to inserts and coupons is… Read more »
0
|
0
-   Share

There is a massive disconnect between retail execs and their customers! Offers in-aisle are not as effective since this is not what customers are seeking at that time. Retailers need to consider the entire shopping lifecycle and design an experience that lines up with the customer journey (hard to do) and NOT just offer coupons in-aisle (easy to do) that don’t address the needs of the shopper.

Very much in agreement. “When you are holding a hammer in your hand — everything looks like a nail.”

Grocery trip objective number one for most consumers is “get what I need as fast as I can, try not to forget anything I need, pick up easy to spot deals as I go.” Add to that equation a mom, especially when her kids are with her, and multiply all the urgency of those objectives by a factor of 10. Asking her to do ANYTHING extra or different in-store (like stop by a kiosk or open an app, for example) is just putting another hurdle between the shopper and home — and it’s annoying. An exception might be the 10% of the population who are active coupon/value seekers … but they’ve likely already done their work at home and their game plan is set before they even walk in the door.

With people (moms and dads) getting so busy, certain ads may be best communicated before the in-store shopping begins — at home when they are making the list. Also, as parents are busier and valuing their time at home with the kids, the grocery delivery option may become more popular, rendering the in-store ads obsolete and the at-home ads more important than ever.

Braintrust
"The concept of influencing shoppers with ads in the store has been around since the mid-’80s and has rarely been successful."

"Heck, we’re ALL too busy to be bothered with ads while trying to get shopping done. Multiply that times 10 if a mom has kids in tow."

"The most important context for purchase decisions in-store is the merchandising, i.e., packages on shelves and other displays of product."