Are stores missing impulse sales opportunities at the self-checkout? 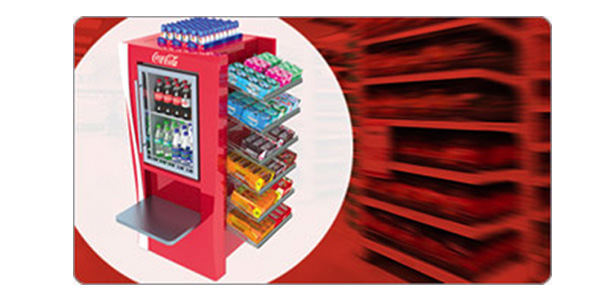 Through a special arrangement, presented here for discussion is a summary of a current article from the monthly e-zine, CPGmatters.

Several years after soft drink giants managed to get small coolers installed right next to checkout lanes at most American supermarkets and many other types of stores, Coca-Cola is trying to get many of these outlets to take the next logical step: merchandising impulse-buy beverages in the increasingly popular self-checkout area.

Beverages, confections and magazines are the three "power categories" that represent 79 percent of sales at the front-end of supermarkets, according to a Dechert-Hampe study from several years ago called "Front-End Focus," which was sponsored by Time Warner Retail Sales & Marketing, Mars Chocolate North America and Coca-Cola.

"Front-end impulse-category solutions are more important today compared to years ago when self-checkout was launched because both the shopper and traditional checkout have evolved," Ron Hughes, Coca-Cola’s director of shopper experience innovation, told CPGmatters. "Now self-checkout has become more pervasive."

And yet, he noted, "As more self-checkout systems came on board, retailers did not really consider systems to merchandise key impulse categories. Merchandising became an afterthought," as noted in the Front-End Focus study which stipulated that 50 percent of self-checkouts were not merchandised.

Coca-Cola’s small coolers allowed shoppers to cap off their in-store experience with cold-liquid refreshment. Now, Mr. Hughes said, Coke is attempting to enhance this experience by folding in the self-checkout area and by incorporating new and emerging technology, sensory experiences and compelling call-to-action messaging into its solutions.

Specifically, for example, Coke and other power category CPGs are helping retailers understand how to manage the front end as one department, allocate merchandising space-to-sales ratios, make sure that solutions connect with shoppers’ motivations, and inspire shoppers to buy impulsively. They are also "helping retailers understand the importance of merchandising 100 percent of self-checkouts," Mr. Hughes said.

He explained that the front end is difficult for some retailers to manage in part because of "the coming together of numerous and varying categories in a relatively small area of the store," and the lack of "a strategic exercise designed to maximize overall front-end performance based on the goals of the organization."

Coca-Cola recommends to retailers that they have a single front-end department manager. Alternative methods of checkout such as paying by phone and "smart shelves" are also causing Coca-Cola to explore "understanding the impact of new technology on buying behavior and how smartphones are influencing shopping along the path to purchase," Mr. Hughes said.

Please practice The RetailWire Golden Rule when submitting your comments.
Braintrust
"From the retailer perspective it’s an issue as well, but one that’s difficult to understand or manage without vendor support. Good to see strong brands collaborating to help the retailers grow baskets and drive overall growth in impulse categories."

"Coke is leading the way on co-branding with retailers — look at any Five Guys location — but others should follow. Imagine self-checkout that shows interstitial ads for the National Enquirer, or offers a coupon for a free candy bar if six are purchased. Expect more."

14 Comments on "Are stores missing impulse sales opportunities at the self-checkout?"

This is a big issue for all impulse-oriented categories, which face pressure from distracted shoppers, diminishing points of presence as self-checkout space compresses the point of sale, and an online shopping dynamic that doesn’t lend itself well to impulse merchandising.

From the retailer perspective it’s an issue as well, but one that’s difficult to understand or manage without vendor support. Good to see strong brands collaborating to help the retailers grow baskets and drive overall growth in impulse categories.

This idea is no stretch at all and is definitely “the next logical step.” It’s so quick and easy to grab that candy bar or soda, scan it and drop it into your bag and there’s less opportunity to rethink it and put the item back, so impulse buyer remorse may be nearly eliminated. In fact, my bet is that after shoppers are conditioned to impulse buys during self-checkout, the category will outsell traditional checkout lanes on impulse items.

Let’s see in a few years!

Our Walmart has done this for years now — ever since they put in self-checkouts. There’s a Coke cooler, a candy rack and a salty snack rack in the blocked-off section for self-checkout. Only makes sense — can’t see an argument against it.

This is a great topic. Those screens potentially have significant marketing value. Made me think. I wonder if someone wearing a Coke vest could actually generate enough incremental revenue at checkout to warrant putting a human at the self-checkout. You know, I don’t think anyone really LIKES to do the work that the supermarket used to do … (Rod Man, who won “Last Comic Standing” last year, does a great bit on that.)

It’s always been easy money for retailers to have impulse buys at the POS. This is definitely the next step in optimizing that. Brands are doing a great job in offering partnering campaigns to drive incremental sales at self-checkouts and there is no reason why more cannot be implemented.

Retail stores are definitely losing out on impulse sales at the check stand as well as in other traffic areas in the store, and in my opinion they do not have to lose out. However, instead of arming the traffic areas with low-margin commodities, why not surprise the consumer with some items they do not expect to see? Make impulse buying interesting and exciting and make some money doing so! You know who does this very well? Bed Bath and Beyond, Trader Joe’s and even Whole Foods, just to name a few. Go for it!

One reason is that at many supermarket operations the front-end is not regarded or managed as a separate department. If it were, opportunities such as the one in this discussion article would be taken advantage of. The front-end is a different space with a different dynamic from in-line departments or perimeter departments. It should managed as a separate entity by the retailers as opposed to the current set of front-end suppliers.

Front-end impulse items have been losing ground lately for a couple of reasons. First, displays are dated. Racks of candy and magazines don’t stand out anymore. I like the concept that Coca-Cola suggests as it gives a new look and feel to the front-end impulse display at check out.

The bigger reason that causes front-end impulse items to be less effective is that people in line aren’t just standing around anymore. They are preoccupied with their smartphones, texting and talking. That “distraction” means they aren’t even paying attention to the merchandise around them. Facebook had some interesting stats on why chewing gum sales were down. Smartphones in check-out lines was the reason.

Coke is leading the way on co-branding with retailers — look at any Five Guys location — but others should follow. Imagine self-checkout that shows interstitial ads for the National Enquirer, or offers a coupon for a free candy bar if six are purchased. Expect more.

I am enjoying the irony (intentional or otherwise) of the RetailWire discussion posts this morning! On the one hand, we have Google delivery being handed over the role of traditional brick and mortar shopper visits by places like Costco where half the fun for customers is encountering the in-store surprises that frequently result in significant “impulse” purchases (and profit for Costco). That is juxtaposed here against brick and mortar stores trying to more aggressively wring out every last tiny “impulse purchase” opportunity at check-out.

Retail is an interesting proposition, no?

A very ignored area for impulse sales. Some creativity is needed to make this viable and profitable.

Technology can definitely play a role. I can envision a click-to-buy service at checkout that enables shoppers to remember those last-minute items and have a store runner grab the item from a central location for the shopper before they go. Although I believe this is an original concept … I’d love to work with a retailer to make it reality.

The advance of checkout technology continues to offer opportunities for retailers to re-imagine the overall customer experience and maximize impulse sales. This is certainly true of self-checkout and may well be even more important with mobile payment systems.

The Front-End Focus work remains the landmark study of the checkout experience and sales performance. Sponsored by Time Warner Retail Sales & Marketing, Mars Chocolate North America and Coca-Cola and conducted by Dechert-Hampe Consulting, it provided the industry with some basic metrics and practices for the checkout.

First, many retailers simply don’t realize the importance of the checkout in terms of both impulse sales and the impact on the overall customer experience in the store.

Third, the entire front-end needs to be managed as a department or business that includes the various checkout options, the categories merchandised at each, and the customer experience.

I think people are distracted on their cell phones when waiting in line. Part of the way self checkouts are laid out is that you have to pay attention to where the open spot is, usually across 4 scanners on the same line. It does keep you a bit more on your toes when you are “next up.” Perhaps placement of impulse buys right on the edge of the wait line can be effective.

Braintrust
"From the retailer perspective it’s an issue as well, but one that’s difficult to understand or manage without vendor support. Good to see strong brands collaborating to help the retailers grow baskets and drive overall growth in impulse categories."

"Coke is leading the way on co-branding with retailers — look at any Five Guys location — but others should follow. Imagine self-checkout that shows interstitial ads for the National Enquirer, or offers a coupon for a free candy bar if six are purchased. Expect more."