Are stores offering clicks but messing up the collect part of orders? 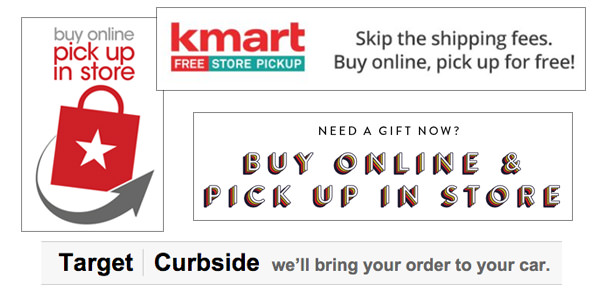 A recent visit to the service counter at a big box store was an eye opener for me. While having my return processed, I was able to see what happens when a customer places an online order and chooses to pick up their purchase in the store. Details will follow, but in this particular case, it wasn’t pretty.

Upon entering the store, the customer went to the service counter and told a member of the counter staff he was there to pick up his order. The associate used her walkie-talkie to try and get someone in the backroom to bring the order out. Radio silence. Next, a page was made on the store intercom and, again, no response. At this point the service desk worker used her walkie-talkie to reach the assistant manager who promptly showed up at the service counter.

The assistant manager was able to reach the backroom on his walkie-talkie only to be told that it would take some time to bring the order out because other workers were on break. The voice on the other end of the line was not sure where the item was located. I stuck around for five minutes waiting to see how the issue would be resolved, but aside from the apologies offered by the service counter staff and assistant manager, not much else happened before I moved on.

Over the years, I’ve heard from others about the pleasure and pain associated with buying online and picking up in store. Most of those anecdotal references were generally positive, although I can recall at least one friend swearing they would never shop at a given retailer again after waiting for an order only to be told the item was not in stock.

A report on The Wall Street Journal site yesterday, citing research by JDA Software, found that of the 35 percent of online shoppers who opt to pick up their orders, half had problems. It’s long been said that retail is detail, although it seems, based on this research, that there are still quite a few details for retailers to work out.

What do you see as the biggest challenges for retailers attempting to successfully manage a buy online, pick up in-store system? Do you think most retailers offering this service have figured out how to make it work?

Please practice The RetailWire Golden Rule when submitting your comments.
Braintrust
"BOPIS turns stores into distribution centers. Stores and their employees are not designed for this function, thus the problems."

"BOPIS is mostly a disaster because retailers do what retailers have done, and using the store as a delivery point is not one of those things they have done."

"These comments reveal a lot of disappointment. My recent BOPIS experience was quite positive. I ordered a Halloween costume for my son and had it shipped to a certain big box store. The whole process was flawless."

12 Comments on "Are stores offering clicks but messing up the collect part of orders?"

The biggest challenge is managing the process with a lean staff that is designed to put products on shelves and then check customers out of the store. If an employee is walking the aisles they can expect to be frequently stopped by customers who need help locating products. BOPIS turns stores into distribution centers. Stores and their employees are not designed for this function, thus the problems.

The are many challenges for retailers attempting to implement BOPIS:

But perhaps the biggest challenge of all is culture!

Store managers are still geared to making cash registers ring at the front of the store … in fact they are measured on it! What gets measured gets done, what pays off gets done first.

BOPIS requires a culture and management shift. A sale today is a process, not a store event. And the most important sale is the relationship with the consumer based upon providing a superior customer experience.

An interesting article, and an issue I happen to be involved a lot in with our clients. BOPIS (buy online, pick up in store) is growing in popularity, and is ripe with potential when the pick-up part of the process is done right.

Our findings are that the back-end part of the process (the IT element, in-store pick and prep) usually works pretty well. Where it breaks down is in the interaction with the staff at the counter.

All too often it becomes just a clerical transaction. The whole point of dragging the customer into the store is to have them buy something else! The staff play a huge role at the point of pick up in maximizing the value of the transaction, and there’s ample proof it works when done right.

The key is to properly train the staff on the BOPIS counter on how to provide a better and more complete solution to the customer.

This isn’t limited to BOPIS. It is about the culture and policy of the retailer. How does the store think of the customer? Is it someone who gets in the way of other processes and breaks or someone who should be looked after, revered and satisfied? If it’s the latter, it all falls into place.

The manager on the walkie-talkie should know exactly how to help the customer because there is a process in place once the order comes in. So that manager will be able to identify the location in the store/back room/stock room, pick it up and bring it to the customer. Or the manager can find the same item on the shelf somewhere else in the store, process the transaction and cancel the online order.

I am getting fed up with customer service that ends up being a disservice to the customer. Once there is a tangled mess of pointing fingers, shrugging shoulders and helplessness in a store, it’s not limited to BOPIS — it permeates the entire entity.

If the primary focus of the store is to sell goods to people who walk through the door, BOPIS will never be a priority for the store or store manager, nor the staff. What retailers need to do is reinvent the store. For BOPIS to work, put in place a process or procedure that gives as much if not more priority to those who have ordered online and are picking up the store. If that online shopper has a good experience (easy and efficient) they will readily use a device to buy again.

I don’t know what the numbers are, but I imagine the return of an online shopper in this case would far exceed the return rate of that shopper walking through the door.

These processes are still relatively new for most retailers. We need to give them a break. Around the world I am seeing great efforts by retail organizations to close the gap on optimized service levels. Today the majority of transactions crossing online and physical stores are being executed to the satisfaction of the customer, and retailers will only get better at this as I’m certain these services will only get more popular.

This is classic — I’m betting the retail “innovation lab” in Silicon Valley thought up this bright idea of BOPIS but haven’t spend more than five minutes in the backroom of an actual retail store to see how the inventory is managed and who manages the inventory.

And to take it further, I’m willing to bet all the retailer had to do was gather input from the backroom on BOPIS and would have received better knowledge on setting up queue systems and pre-packing and how to leverage the Motorola/Symbol backroom RFID to communicate BOPIS status in real-time to the consumer.

Customers will soon find that retailers implementing item level RFID technology for real-time inventory visibility rarely have this problem. The line from the article “The voice on the other end of the line was not sure where the item was located” could be a notable part of why BOPIS isn’t running smoothly for some retailers. Item level RFID provides greater than 95% inventory accuracy and arms sales associates (and even customers) with real-time knowledge of precisely where a product is located. As collaboration between manufacturers and retailers on RFID grows, it will be difficult for companies to ignore RFID’s role as a critical enabler of inventory visibility.

First off George, I think I know what retailer you visited. I have been on the receiving end of that exact same scenario! 😉

My take: the retailers that fall into that level of non-service are those that do not yet take the concept seriously. They offer the ability to buy online and pick up in store, but only as a one-off service. Not as a way of doing business.

Perhaps it is okay to be a little laggard during the pilot; especially if the customers response to this service is unknown. However, when the decision is made to roll with it, the retailer must be committed or be prepared to lose valued customers.

This is not a one-off game. The processes must be well defined, ownership in place and embraced from the top down.

BOPIS is mostly a disaster because retailers do what retailers have done, and using the store as a delivery point is not one of those things they have done. I have written on this before that BOPIS or Click-and-Collect are MASSIVE opportunities for upselling, but obviously, upselling itself is just a clever idea that might be useful someday.

This whole scenario is why I believe more bankruptcies will be required before some people get their heads out of the miasma of the past, into the sunshine, and see where their business MUST go. It’s either use BOPIS as an integral part of upselling in the bricks store, or surrender to someone who does. Nobody is too big to fail!

In my experience, most brick and mortar retailers have not dedicated the space, process and training for pickup in store. You need dedicated shelving, tracking and in some cases, training for the service personnel to pull the item and stage it for collection. Some have done it better than others. Many seem to haphazardly hope that once you are inside the store for pickup, you already paid for it and you will put up with the wait to get it.

These comments reveal a lot of disappointment. My recent BOPIS experience was quite positive.

I ordered a Halloween costume for my son and had it shipped to a certain big box store so I could easily return it if the size was wrong.

The order arrived in time, the line at the pickup counter was short, and the associate encouraged me to open and inspect the item before paying for it. The whole process was flawless.

Previous comments notwithstanding, my experience isn’t out of the ordinary. BOPIS enables brick and mortar retail a sorely-needed competitive advantage over Amazon. I was one of the 40% of BOPIS shoppers who purchased another item.

But the CX BOPIS must be continuously improved, from better associate training around item location to added convenience like curbside pickup.

Braintrust
"BOPIS turns stores into distribution centers. Stores and their employees are not designed for this function, thus the problems."

"BOPIS is mostly a disaster because retailers do what retailers have done, and using the store as a delivery point is not one of those things they have done."

"These comments reveal a lot of disappointment. My recent BOPIS experience was quite positive. I ordered a Halloween costume for my son and had it shipped to a certain big box store. The whole process was flawless."