Bark barks outside the box with BarkPark 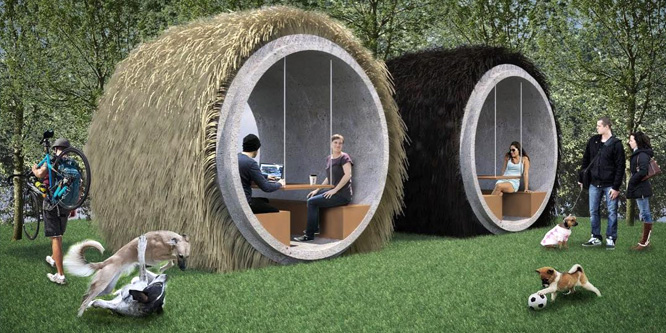 Many online retailers have experimented with their own physical store concepts in recent years, but Bark’s is one of a growing number of such outlets aimed at non-human customers — and may be the first without any walls.

Bark, the pet supplies company responsible for BarkBox, announced the launch of its branded BarkPark dog park in Nashville, TN. The park will be open from 7 a.m. to 7 p.m. beginning on Sept. 8 and will run through November, according to Fortune. It will feature a large, clean green space for dogs to play in, pet care professionals to monitor the dogs playing and, of course, a selection of Bark Originals toys. There are also human-facing events scheduled at least twice weekly at the location. Though it’s only a pop-up, the chain has aspirations to open more BarkParks nationwide.

The BarkPark website describes it as an “ultra-fun dog hangout that doubles as a hip human hangout for playing, working, and chilling.” It also features free Wi-Fi, a coffee bar and is BYOB (for beer and wine).

Originally a pure-play e-tail subscription service, BarkBox has begun taking steps into the physical world in order to scale. In late 2017, the company teamed up with Target to bring product to the retailer’s shelves. This week, Internet Retailer reports, it began selling three of its collections on UO MRKT, Urban Outfitter’s online marketplace.

If BarkPark becomes a full-time location at some point in the future, it will put the brand in competition with the brick-and-mortar incumbents in the space.

Both PetCo and PetSmart have been piloting experiential concepts to cater to customers that want to pamper their pets. PetCo launched its first PetCoach location, dedicated to such services as veterinary care and grooming, earlier this year. PetSmart began piloting a high-end luxury Pet Spa a few years ago (though it does not appear to have expanded beyond a few locations).

The pet care space has become a growth industry as Millennials have begun to think of their pets as “fur babies” and begun to spend on them accordingly. According to a TD Ameritrade study, dog owners spend $1,285 on their dogs per year.

DISCUSSION QUESTIONS: Do you see BarkPark as a concept that will endure for Bark? What other types of non-traditional concepts do you think would work for e-tailers as they attempt to establish a physical footprint?

Please practice The RetailWire Golden Rule when submitting your comments.
Braintrust
"I can see BarkPark being successful in city areas where people don’t have a yard or another (free) neighborhood park to play in."

"Doing pop-ups in already existing dog parks just might work. It certainly seems like a concept worth testing."

"...beats the heck out of a plain, sparsely grassed lot with a link-chain fence around it. "

8 Comments on "Bark barks outside the box with BarkPark "

This is a cool concept that will work in markets where land is at less of a premium. Pet owners have proven that they are willing to spend to pamper their pets so this is a good extension of that. I’m not too confident these types of parks will in and of themselves be huge revenue drivers but if they help to expand the core BarkBox subscription service, they can be nice addition.

This is a great concept, but is it one that will endure? Unlikely. I think the cost plus lack of brand resonance, particularly as the PR value drops, will see it reach a point where it is no longer doing it’s job for BarkBox. That said, I love the idea and if I were in Nashville TN, me and my dog would be down there in a heartbeat!

I’ve seen BarkPark get some criticism online – pay $19 a day to play with your dog in some grass? But honestly, I can see BarkPark being successful in city areas where people don’t have a yard or another (free) neighborhood park to play in. And the $78 season pass is definitely more affordable if you plan on bringing Fido each weekend.
Overall, this is a great example of an online retailer incorporating their products into a physical destination while providing an experience and service that makes sense for their brand.

One of our nearby off-leash dog parks does an annual event where they bring in vendors of pet products and services and it seems to be a profitable event. For this concept, the main problem seems to be in finding land that can be temporarily used as a dog park however doing pop-ups in already existing dog parks just might work. It certainly seems like a concept worth testing. We do love our fur babies. For my 2 cents.

If there were ever a time for this to work, it would be now. Pet owners seem to be more and more involved with their pets. It is part of an integration with in-store, online and (now) in-park retail experiences. For this to work, Bark will have to create customer and pet loyalty.

Safe, accessible and clean dog parks are always in short supply. The nearest one for us here in Scottsdale is about eight miles away. Frankly I go to a dog park to play with my dog, not drink or get caught up on emails. I’m not really interested in a Starbucks with dogs. The idea of having interesting structures for dogs to play in, over and around is a great idea and beats the heck out of a plain, sparsely grassed lot with a link-chain fence around it. If there was one relatively nearby, I’d gladly pay for an annual membership.

Solid idea here from Bark. It’s offering something extra to their existing customers, and creating a nice environment for new customers to meet the brand — a positive first impression is a great way to start building a relationship.

I certainly see this working as a pop-up. As a longer term, permanent idea, perhaps Bark could team up with existing spaces/parks to offer some of the benefits outlined above. Then they’re not having to do everything.

There are so many opportunities for retailers to reimagine what a “store” is — or should we say physical space for interacting with brands. Retail and brand-building can happen anywhere, you just need to be creative and find the right opportunity for your brand. For sportswear brands this might be gyms and parks and athletic tracks, kitchenware brands might look to restaurants etc, furniture brands could use lobbies and hotels and offices, etc, etc.

An interesting idea — certainly an unusual one in its specifics — but I’m not sure how useful it is as a pop-up. These aren’t pet insects we’re talking about. The dogs and their owners are going to want/need a place to play after November ends; then what? If I were one of the …uhm, customers, while I’m sure I’d appreciate the effort, I can see also being annoyed by its openly transitory nature. I think it would be better if they marketed it with a more open-ended time-line.

Braintrust
"I can see BarkPark being successful in city areas where people don’t have a yard or another (free) neighborhood park to play in."

"Doing pop-ups in already existing dog parks just might work. It certainly seems like a concept worth testing."

"...beats the heck out of a plain, sparsely grassed lot with a link-chain fence around it. "