Can soccer be a differentiator for Target? 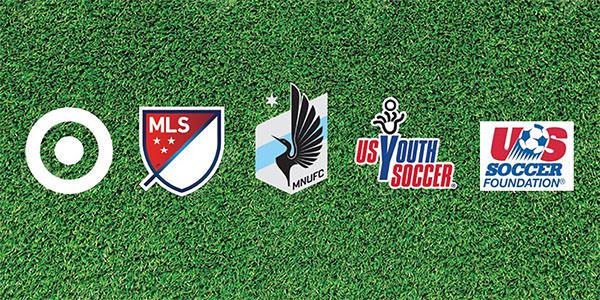 In its biggest push ever into team sports, Target reached sponsorship agreements with Major League Soccer (MLS), U.S. Youth Soccer and one of MLS’s newest clubs, the Minnesota United FC.

The sponsorships come as MLS is adding teams and its attendance recently jumped ahead of the NBA and NHL on a per-game basis.

The game is also increasing in popularity with younger and multi-cultural consumers in the U.S. At the store level, sales of soccer-connected merchandise climbed 15 percent in 2016, the fastest-growing sub-category within Target’s sporting goods business. Target has also been increasing its emphasis on Hispanic marketing, expanding into urban centers and shifting its corporate giving strategy from education to wellness.

“There are so many things that drew us to soccer — it’s multicultural, watched and played by families and is growing immensely in popularity,” said Rick Gomez, SVP, marketing, in a statement.

The three-year partnership with MLS includes broadcast advertising on Univision, Fox Sports and ESPN as well as in-stadium signage. As the official retailer for Youth Soccer, Target becomes the presenting sponsor of the Target United Cup — the largest recreational soccer tournament in the country that will visit 30 to 40 cities. Finally, Target’s bullseye logo will be featured on the jerseys of the Minnesota United FC, the discounter’s new hometown MLS squad.

“Brands that invest in soccer today will be really happy brands in five years because soccer is growing in popularity,” T. Bettina Cornwell, head of the marketing department at the University of Oregon, told the Minneapolis Star-Tribune.

Still, it’s rare for a retailer to sponsor a professional sports league. Dick’s Sporting Good has a sponsorship deal with the U.S. Olympic Committee (USOC) but no professional one. Among mainstream retailers, Kohl’s, which sponsors the Color Run 5K-series, stands out for investing in fitness events.

Last year, Target ended its 27-year sponsorship of IndyCar. In the Minneapolis market, its name graces Target Field, home of the Twins, and Target Center, home of the Minnesota Lynx and Timberwolves.

DISCUSSION QUESTIONS: Does Target’s investment in soccer make sense? Do you see more potential upsides than limitations in the sponsorships?

Please practice The RetailWire Golden Rule when submitting your comments.
Braintrust
"In making an investment in soccer at this point in the imminent development and growth of the sport in the U.S., Target is making a good bet."

"Soccer is multicultural, it’s a sport that’s inclusive from pee-wees all the way up to pros and it’s cross gender."

"Investing in youth sports of all kinds makes sense for Target. Families are Target’s main demographic and youth sports are family-focused."

13 Comments on "Can soccer be a differentiator for Target?"

As a big fan of the sport (if not necessarily of MLS), and former national referee, I can see that in making an investment in soccer at this point in the imminent development and growth of the sport in the U.S., Target is making a good bet. I wholly agree with T. Bettina Cornwell’s statement about the growth potential of the sport and an investment in it. Wait and see, but I am confident of its success.

Logically, this is a good investment area for Target. Whether it translates into profitability, only time will tell.

IndyCar can’t compete with soccer’s growth trajectory. Soccer is multicultural, it’s a sport that’s inclusive from pee-wees all the way up to pros and it’s cross gender. In the ’50s, every boy had a baseball mitt, in the ’60s and ’70s, they had a basketball too, but now tons of boys and girls have a soccer ball. So the potential to sell into both the equipment side (which includes a piece of fashion) and the fan side is enormous. So all the elements are there. Execution is what is going to make or break the opportunity, especially with mobile.

It all depends on how much Target paid for the sponsorship. Soccer makes sense since it is a growing sport, is a favorite with Hispanic consumers and the sponsorship can be useful in building trade relationships. But sponsorships primarily build name recognition, not sales. Target needs to focus on figuring out its core brand story and on retail basics, rather than constantly throwing new ideas against the wall to see what sticks.

Soccer in the U.S. is a good bet. It’s growing in commercial popularity, not just as a school sport. Worldwide it has popularity that rivals our biggest sports franchises in the U.S. To sponsor is one thing. To sponsor with a merchandising program is another. For there to be a return on sponsorship dollars, there has to be a good merchandising plan in place. I can’t imagine that Target won’t have one. I’d love to see Target as the go-to soccer retailer (non-sporting goods or specialty store), and I think they would be, too. They have a great brand and now they are going after another segment or demographic of customers — one that loves soccer.

Where “soccer mom” is a core demographic for Target, sponsorship extends the marketing reach into multiple cultures and into decision influencers. Target is on target with this brand messaging.

Investing in youth sports of all kinds makes sense for Target. Families are Target’s main demographic and youth sports are family-focused. This is a smart move by Target since soccer is a growing sport, but it should not be made at the expense of other major sports (football, basketball, baseball, etc.) since these are all part of the same focus, attraction and participation.

Smart move but don’t expect any quick sales results out of this announcement. This is more of a long-term investment on Target’s part and should strengthen the brand and help future sales. Having the company’s logo appear on the jerseys of the local team, Minnesota United FC, further solidifies Target’s deep connection to the community.

Anything Target does from this day forward will be either a lateral move or a step backward. What we thought were innovative moves have turned out to be blunders.

This could be very good for Target or they would not have entered the marketplace. Dick’s is doing something similar in baseball, specifically the local programs in the individual store’s market. They have a program where Little League programs are given discounts on merchandise such as gloves and shoes purchased by the players. They also supply balls, hats and uniforms at a discount to the program. It is a win/win for both. The store gets the discounted sale business plus the extra sales they get when the customers are in the store. The customer gets the feel good effect of buying what they need to outfit their children at a discount. If Target is using something similar to this, their end result can be much better because of the full merchandise lines they carry vs. only the sports line a retailer like Dick’s carries.

To paraphrase the old joke: “Soccer is tomorrow’s sport, and it always will be.”

That having been said, why not? All they’re doing is advertising … soccer should be evaluated along with every other marketing opportunity.

No, it doesn’t make sense. Yes, soccer is huge today and we watch it. But as my 23 year old Generation Z ginormous soccer fan brother would say, I personally don’t care about the advertising on jerseys unless it’s bad stuff.

Companies still need to look at the demographics of who they are advertising to. Most moms shop at Target and they don’t watch soccer. And we don’t pay attention to the advertisers on the jerseys, so we aren’t going to tell our moms to shop at target. If target hired Messi to use as an influencer and he made YouTube videos of him wearing Target stuff, then Target might hit a home run.

Soccer? The property that has promised so much for so long in the US? US futbol is mediocre to even to US fans; it’s lousy elsewhere. Might make more sense to partner with a top of the table EPL team. A partnership with MSL is a decent low level association, but it is not going to differentiate brand Target, especially as a home town tactic. Makes sense, and it’s small potatoes. Target needs to get back its “Tahr-zay” groove. (Whatever that is now a days.) Surprisingly recent efforts were both expensive and off brand. KEY is who do they want to do biz with? They landed on a “people with teeth” target and it ended up in weird places. Gwen Stefani was a limiting choice. Grammy “Imagine Dragons” activation had no legs. But these are all tactics in search of a strategy and February is a dead time in store when few dollars are available to drive meager traffic. Hopefully Mr Gomez can not over think or over cook this aspect of the marketing mix.… Read more »
0
|
0
-   Share

Target has found a way to get in on the “action” of a sport that has vastly grown in popularity and is only continuing to grow. When I was a kid, soccer wasn’t that popular due to it’s recent migration to America. Now you’ll find soccer fields all over the U.S. bursting with children (and parents) who learn to love the sport because their kids do. In America, there is already a large demographic of kids raised playing soccer since they were little. They’re now in their 20s and early 30s, and they’re the “few” who are avid watchers of MLS sports, international tournaments and, of course, the World Cup. This base is only going to grow. Casting a wider net and also reaching the Mexican/South American demographic, as others have mentioned, is a smart differentiator.

Target’s move is a shrewd investment.

Braintrust
"In making an investment in soccer at this point in the imminent development and growth of the sport in the U.S., Target is making a good bet."

"Soccer is multicultural, it’s a sport that’s inclusive from pee-wees all the way up to pros and it’s cross gender."

"Investing in youth sports of all kinds makes sense for Target. Families are Target’s main demographic and youth sports are family-focused."