Coming soon: A chain built by geeks for geeks 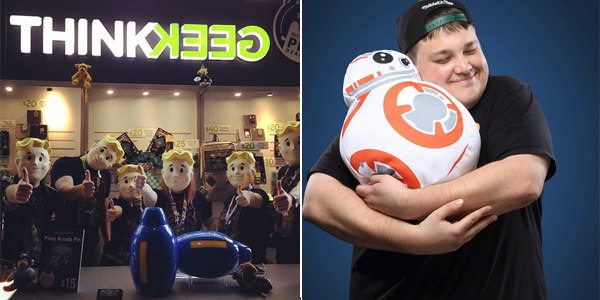 It has only been a few months since video game retailer GameStop acquired Geeknet and its longstanding geek-chic e-commerce outlet, ThinkGeek, but management is wasting no time in leveling up its new brand.

GameStop is rolling out a new brick-and-mortar chain under the ThinkGeek banner, featuring the nerdy collectibles that has made the brand a hit with geeks and non-geeks online. In an interview with RetailWire, Eric Oria, senior director of marketing and strategy at GameStop, said that a brick-and-mortar concept for ThinkGeek has been a long time coming.

"If you talk to some of the folks at ThinkGeek, this is something they have thought about for many, many years, before we were even in the picture," said Mr. Oria. "The reason we were so excited about being able to partner with ThinkGeek on this is that this is something that’s only possible with this acquisition."

Mr. Oria said that while ThinkGeek brings a knowledge of the products its customers want, GameStop brings operational brick-and-mortar expertise that was missing.

The first location of the new format is set to open in a shopping mall in Orlando. The choice of location was driven in part by information garnered from GameStop’s PowerUp loyalty program.

"We have a really good real estate team in the building who we essentially just tasked with going out and finding a store location where we knew we had PowerUp customers that were into collectibles," said Mr. Oria. "Luckily, we can see that with our PowerUp rewards data, so we tasked them to find markets where we know this is going to be a healthy business."

Mr. Oria said PowerUp data will also be used to determine future locations, to be revealed in the next few months.

Inventory selection in the new stores will be data driven using ThinkGeek’s online purchases, transactions at Comic Con and similar events, as well as the sale of collectibles in GameStop stores over the past year.

The new store and its name (with more than a decade of geek cred attached) will compete with mall-based stores including the novelty retailer Spencer Gifts, as well as Hot Topic, which was outbid by GameStop in its attempt to acquire ThinkGeek earlier this year.

How challenging will it be to transfer ThinkGeek’s unique qualities as an e-commerce operation into stores? How do you see the chain’s use of data fortifying its efforts to roll out physical stores?

Please practice The RetailWire Golden Rule when submitting your comments.
Braintrust
"In the ’80s, I was in the middle of the studio wars with Disney, Warner Bros., etc. having stores. We designed the Hanna-Barbera stores. The biggest challenge is to keep coming out with fresh merchandise."

2 Comments on "Coming soon: A chain built by geeks for geeks"

As long as the selling model remains focused upon ThinkGeek’s customer, it will successfully move forward. However if GameStop assumes unproven brand elasticity, ThinkGeek could be doomed.

It all depends upon the CEO, as ultimate brand steward, properly directing the c-suite. If the CEO has any dissonance, it will be a rocky absorption of the acquisition.

I just heard about ThinkGeek and went to their website. I think this is a natural! We’ve all read about the game and comic culture, so there is a big market for this stuff. In the ’80s, I was in the middle of the studio wars with Disney, Warner Bros., etc. having stores. We designed the Hanna-Barbera stores. The biggest challenge is to keep coming out with fresh merchandise.

Braintrust
"In the ’80s, I was in the middle of the studio wars with Disney, Warner Bros., etc. having stores. We designed the Hanna-Barbera stores. The biggest challenge is to keep coming out with fresh merchandise."