Could mobile scan and pay lead honest shoppers into a life of crime? 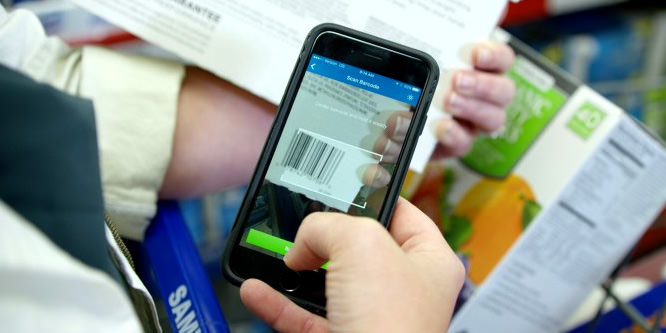 Among the chief complaints of consumers in perhaps every study ever done on supermarkets in recent decades has been the checkout. This dissatisfaction has led retailers into self-checkouts, the use of traffic flow technology to properly staff the front-end, and the testing mobile scan and checkout.

Mobile scan and pay tech in the U.S. has seemingly been in perpetual test mode for years. Interest remains relatively high, however, as mobile tech becomes integral to the daily lives of consumers and as store operators look to reduce costs and cut back on employee redeployment.

However, a new study by criminologists at the University of Leicester (England) asserts that retailers may find themselves with a shrink issue on their hands if mobile scan and pay tech is more broadly used.

According to the authors of “Developments in Retail Mobile Scanning Technologies: Understanding the Potential Impact on Shrinkage and Loss Prevention,” a reduction in interaction with associates during shopping trips is likely to lead consumers who would normally not be tempted to take something without paying. Some shoppers may rationalize walking out with items that have not been purchased because of issues with scanning.

The use of the self-scanning leads to an average rate of loss more than 122 percent higher than average, according to data from available research on the topic.

One of the co-authors of the study, professor Adrian Beck from the University of Leicester’s Department of Criminology, said that, while retailers and consumers both see potential benefits in mobile scan and pay technology, the theft issue represents “some potentially rather worrying long term consequences.”

Please practice The RetailWire Golden Rule when submitting your comments.
Braintrust
"While there are obvious labor savings, customers have to wonder whether their fellow shoppers are being completely honest."

"Absolutely not — mobile self-scanning shoppers are going to be a store’s best behaved."

10 Comments on "Could mobile scan and pay lead honest shoppers into a life of crime?"

My Giant store recently forced all customers into self-checkout, unless their basket is 12 items or less (which makes no sense to me). One associate moves from station to station helping stumped customers deal with produce and other issues, and it doesn’t appear that there are eyes on the whole process. The potential to “forget” to scan a pricier item is absolutely there.

While there are obvious labor savings, customers have to wonder whether their fellow shoppers are being completely honest.

With all the shrink concerns about self-checkout I was surprised that our local Sam’s Club had had installed several. However, it beat the typical long lines if you had just a few items.

A customer could forget to ring an item. However, with Sam’s you always have that friendly checker at the door making sure you didn’t forget something.

Absolutely not — mobile self-scanning shoppers are going to be a store’s best behaved. The fundamental reason is that your mobile phone is your identity, and people who are up to no good like to keep their identity private when they “shop.” I should know, because my company FutureProofRetail.com specializes in mobile self-scanning and I designed the loss prevention systems there, which have been used to weed out dishonest shoppers and staff. According to the National Association for Shoplifting Prevention traditional shoplifters are successful close to 98 percent of the time — this is based on caught shoplifters’ self reporting on how many times they got away with it already (average: 48 times!) If a mobile self-scanning system implements a simple random bag check procedure it need only check more than one in 48 bags to be better than retailers’ current shoplifting protections. But in reality the protection goes a lot further. Your mobile phone is your identity. It knows where you are, who you are and what you’re up to. If the software is… Read more »
4
|
-7
-   Share

With every new technology comes new fraud, followed by new technology to stop the fraud. Mobile scan and pay is no different. Grocers should evaluate their risk tolerance for self-checkout before embracing mobile scan and pay, which allows more room for theft. In the case of self-checkout, anti-theft measures beyond “more staffing” intrude on the customer experience. Weight scales verify that the mass of the item matches the scan of the item, but cause false alerts. Video analytics verify items aren’t left in carts, but are considered anti-privacy. Mobile pay carries more pitfalls, as it can occur in-aisle as well as at checkout. Are grocers ready to implement countermeasures? Consumers dislike captcha, choosing images in their online banking apps, accounts that log out after ten minutes of inactivity and the like. Yet these steps protect service providers from fraud, which ultimately helps users with lower costs. So they’ve become accepted. On the other hand, the kinds of countermeasures to stop mobile scan and pay are more intrusive than any of the above. Consumers likely won’t… Read more »
6
|
-1
-   Share

Most people are honest. So, do you make your rules, processes and policies for honest people, or for the very small percentage that will try and take advantage of you? Focusing on how to mitigate shrink may penalize the honest customers with a cumbersome process. When the rules and process become too rigid — and not easy to work through — you lose your honest customers to a store that creates a better (easier) experience. Be careful how you treat (or mistreat) the honest customer.

Yes — technology opens the door to both deliberate and accidental shrink.

Will it add larceny to the heart of some? I guess it might, but that shouldn’t be the primary concern. Every retail system is open to shrink and has been since the days when fast children did snatch and grabs in the souk.

The question ought to be, do these systems promote an inquiry in the rate of accidental shrink? If the answer to that is yes, then they need to be rethought before they are deployed at scale.

As to the final question — again, assuming we are talking about deliberate shrink — retailers are never as good at shrink control as they think they are. They should be as vigilant as they can in terms of these new technologies, but that vigilance needs to be tempered by the reality that one unintended consequence of building better mouse traps is the evolution of smarter mice.

The good news is, studies have shown over a couple decades now that shoppers are inherently honest overall in the U.S. This has been proven over the long-term with self-checkout terminals. Are there variances in this trend based upon specific local economic conditions? Yes. However, most metro areas tend to have consumers who leverage these technologies for their own convenience, and not to alter their persona into a life of crime.

Costco was testing the technology and it is now absent from those stores, so I am assuming it did not work out. My observation is that employees spent a lot of time getting consumers set up and checking out, so it did require a lot of employee time and did not make long lines go faster.

I don’t think we need to worry about “unconscious” dishonesty here … plain old theft and (actual) dishonesty could well be enough to sink the idea (not that we won’t continue to hear about it). There aren’t that many “truly dishonest” people you say? Fine: it doesn’t take many. And not to be a Luddite, but this sounds very much like one of those ideas eagerly promoted by tech and finance people who have very little if any actual experience selling things.

I thoroughly agree it’s a problem. But I think it’s less about “theft” than about a behavioral issue that would lead to walking off without paying. Consumers are well trained in a process — one that’s easy to keep track of. Go shop. Pick a set of things to buy. Put them into one basket. And then all at once, on our way out, purchase them. This kind of chunked structure is easy to follow and fits with how we work as people. To stop and scan & buy helter-skelter within a shopping trip would be a bit of consumer chaos. It would even probably decrease the enjoyment of shopping. Let me also note some problems in these theories based on dissatisfaction with checkout. With a larger order I love having someone check me out (love self-checkout with 4-5 things). Far better than hassling with searching for tags, product codes on the apples, etc. But my dissatisfaction is that there’s a trick to being a good checker. Far too many are chatty rather than effective.… Read more »
2
|
0
-   Share

Braintrust
"While there are obvious labor savings, customers have to wonder whether their fellow shoppers are being completely honest."

"Absolutely not — mobile self-scanning shoppers are going to be a store’s best behaved."