Do wine and beer make for a better shopping experience? 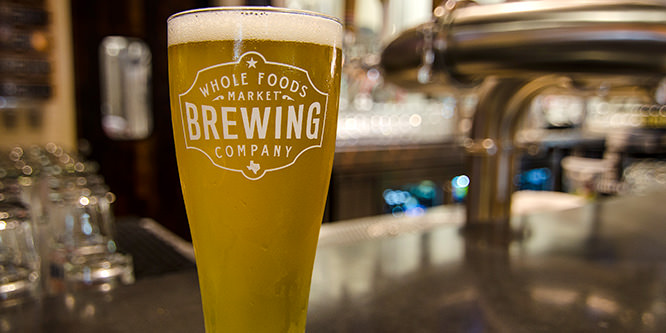 Retailers, from Barnes & Noble to Whole Foods, are experimenting with the sale of beer and wine on-premises to attract shoppers to their stores. The concept of on-site bars is not new, but provides hope that chains can attract shoppers with marketing tactics that don’t focus almost entirely on price.

A recent Wall Street Journal report pointed to supermarkets that are opening bars inside stores and including cup holders in carts so that shoppers can meander the aisles with their beverage of choice. A case in point is Whole Foods, which allows shoppers to carry and drink beer and wine in about 350 of its locations.

“When customers find out that they can sip and shop, a lot of times it’s a light bulb moment,” Chris Kopperud, a regional specialty coordinator in the Midwest for Whole Foods, told the Journal.

Gelson’s, an upscale grocery chain in California, found that offering beer and wine in its stores attracted both male and female shoppers across all adult age groups. The chain plans to add more stores with bars.

The supermarket as a social hub has been part of the business for many years, going back to days when stores were often a place for neighbors in less densely populated places to meet and catch up.

In some locations, stores have developed reputations as meeting places for singles. The so-called Social Safeway in the Georgetown area of Washington, D.C. has such a reputation, developed over a decade. As a 2015 article on The Hoya website pointed out, “Before Tinder or OKCupid, if you were looking to meet new people, it was time to make an excuse to go grocery shopping. One alumna who preferred to remain anonymous claimed that she intentionally bought only three or four items during each trip, for the sole reason that she would have to frequently return to the grocery store, thus increasing her exposure to the dating pool.”

DISCUSSION QUESTIONS: Are bars serving beer and wine in supermarkets a good answer for stores seeking to attract shoppers less focused on price? How do you feel about allowing shoppers to sip while they shop?

Please practice The RetailWire Golden Rule when submitting your comments.
Braintrust
"As a foodie, I'm totally inclined to favor supermarkets (or other retailers) that offer these types of sensory experiences. "

"I thought the wine bar in Mariano’s was going to be a home run ... but I have yet to see a single person sitting at the wine bar..."

"There are some supermarkets that are perceived as “social hubs” and serving alcohol might be consistent with that experience. "

15 Comments on "Do wine and beer make for a better shopping experience?"

As a foodie, I’m totally inclined to favor supermarkets (or other retailers) that offer these types of sensory experiences. The key to turning sippers into shoppers will be up to retailers having the most interesting products displayed in an appealing manner.

I thought the wine bar in Mariano’s was going to be a home run when it was introduced. It should be a great fit with the excellent onsite food service offering that includes a decent sushi bar. But I have yet to see a single person sitting at the wine bar. One day I was determined to try it at lunch, so I manned up and sat down even though I was solo. The attendant was “away” and I became uncomfortable enough sitting there waiting that I got up and moved on. I can’t believe it is “social stigma” in my Chicagoland suburb, but something seems to be holding shoppers back. As for “social shopping,” the mention of the Social Safeway in D.C. brought a smile. The Lund’s on Lake Avenue in Minneapolis was your Thursday evening destination if you didn’t have a date for the weekend yet in the late-’70s. It saved a young, single marketing assistant’s social bacon more than once as I recall.

Sipping while you shop is definitely a way to make the experience more relaxing! The biggest point of this is to differentiate on something other than price. It becomes an EXPERIENCE for the consumer vs. a chore. If customers are having fun you can only believe it will lead to more sales.

In a word, context. Serving beer and wine might make sense IF the supermarket has a environment focused on customer experience. There are some supermarkets that are perceived as “social hubs” and serving alcohol might be consistent with that experience. The best context is when stores can create an experience where customers learn how to pair wine or beer with food they are purchasing. If the alcohol is served to help supermarkets engage and educate customers, then the context might work very well. If serving alcohol becomes a primary means of getting customers to linger longer, then there is something wrong with the overall store context and experience.

Drinking and driving is a no-no because it can cause accidents. Drinking while shopping may cause damage to your wallet.

I wonder what the reaction will be when someone has one too many in the store and then has a fender bender or worse in the parking lot?

Here in Atlanta we have the Disco Kroger! As for drinking while shopping, I can see it being a hit for a moment however not for the long haul. Most folks take their grocery shopping pretty seriously as well as their dollars, so they don’t want to come home with a whole bunch of snack foods instead of “real” food.

On the other hand, I can see stores offering tastings of new beers and/or wines. Sort of like Total Wines does. They have someone pour tastings and talk about pairing. Could work well in the grocery store and would create a great experience that just might bring the shopper back.

Brick-and-mortar retailers are looking for ways to create experience destinations … otherwise why not shop online? Wine and beer help create that destination experience.

This is a great idea and a concept which consumers clearly embrace. The bigger question here is, why not allow shoppers to sip and shop? How many grocery stores have Starbucks in them already? Moving to beer and wine seems to be the next stop to enhancing the supermarket experience.

The phenomenon of a full-service customer experience is not only happening with wine and beer, but with coffee, food, comfort areas, product testing, high-level human service and anything else involved with giving customers a reason to actually go to a store. The old Marine motto, “anytime, anywhere” now actually applies to retail CX. Beer? Sure. Coffee? Sure. Chocolate? Uh, yes! Comfort area? Why not? Concierge? Of course. Stay a while? OK.

What we’re witnessing is the beginning of the idea that nothing is out of bounds when it comes getting people to come into the physical spaces we invested so highly in for the last 30 years. Have a beer … PLEASE!

I agree with the posters who applaud supermarkets that offer beer and wine as part of an overall sensory experience. But there are many ways to offer these beverages. Let me speak from experience and observation rather than from a theoretical point of view. One of the stores I shop in frequently is Giant Eagle in a Cleveland suburb. I often see shoppers enjoying a glass of wine at a special wine bar staffed by a wine expert. Certain wines are being promoted, enjoyed and sold. Advice is given. This is a good thing. In another suburb, Market District (a unit of Giant Eagle) operates a full-size bar next to a cafe offering light fare. The shoppers there seem to enjoy and appreciate this experience before shopping. This is a good thing. Another Market District in another suburb has Food and Wine Fridays. For six bucks, shoppers buy a wine glass and they go around the story to six sampling stations there appetizers are available. The shopping carts have slots for the wine glasses. Every… Read more »
0
|
0
-   Share

I’ve not seen this in action and immediate thoughts were mixing alcohol and shopping might be dangerous! However, if it adds to a more relaxed and enjoyable experience then it’s got to be a good thing for both consumer and retailer. Having another reason to go grocery shopping and make it social event also is a great way to draw people into stores. Hey, the chance of a beer with a buddy might even entice my husband to offer to do the grocery shopping!

Anytime you can “relax” the shopper, it’s a good thing for the merchant. They sell beer at car auctions. They offer champagne at luxury boutiques. Why not loosen up the crowd a bit while shopping for food? Fill up that basket with all kinds of goodies (that I may not have purchased if I wasn’t enjoying libations).

Really? Alcohol in supermarkets? Bookstores, maybe? Education on wine pairing and cooking make sense. But who checks the I.D.s? Where are the kiddies? I understand the principle of loosening up the shopper and providing an experience, but alcohol lowers inhibitions as well as impairs driving, so there may be more impulse items in the shopping cart (or get dates for some), but why do I, not a prude by any means, feel uncomfortable with these prospects?

I don’t have experience in the grocery store world, but it certainly works in a museum store. Although visitors are not typically walking through the museum with wine and beer we do have special events (member openings, member private shopping nights, etc.) where alcohol is served. Technically we don’t allow beverages in either the galleries where the art is or the store, but we relax the rule in the store. We definitely see a stronger tendency to both linger and spend.

Braintrust
"As a foodie, I'm totally inclined to favor supermarkets (or other retailers) that offer these types of sensory experiences. "

"I thought the wine bar in Mariano’s was going to be a home run ... but I have yet to see a single person sitting at the wine bar..."

"There are some supermarkets that are perceived as “social hubs” and serving alcohol might be consistent with that experience. "