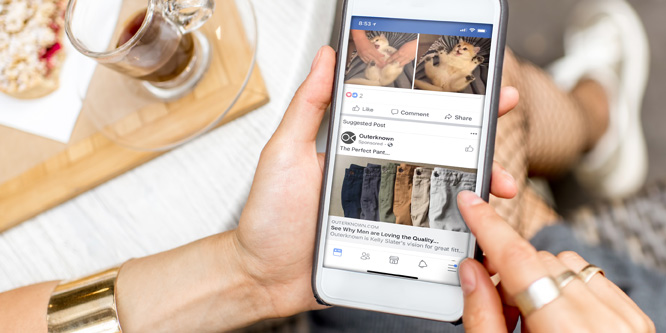 Facebook is rolling out a new feature that will allow users to provide feedback on their experience with advertisers on the site, according to a Wall Street Journal report. Advertisers who get large numbers of negative reviews will be contacted by Facebook and given the option of improving their performance or being banned from the site.

“There are some companies that are just bad actors and we have no tolerance for that,” Sarah Epps, a product marketing director at Facebook, told the Journal. “As soon as we can detect those companies, we enforce against them, but for companies that do want to improve, we want to give them that opportunity.”

Facebook’s decision follows a report last month by the Journal that found individuals were setting up online storefronts that added a markup to items sold by sellers on sites such as Alibaba’s AliExpress in China. In a number of cases, the products took a long time to arrive and, when they did, were found to be not as advertised. One hoodie, which was advertised for its softness and sold for $70, arrived three weeks after purchase smelling like gasoline and made of materials that were not the least bit soft.

Facebook has been under intense scrutiny in 2018 following reports that the social media giant allowed Cambridge Analytica to gain access to the records of 50 million users of the site. The data was used to build profiles of and target individuals with the goal of electing Donald Trump.

While the #DeleteFacebook movement that grew in response to the Cambridge Analytica scandal is no longer at the top of the daily headlines, the exodus of angry users and advertisers from Facebook has reinforced the need for Mark Zuckerberg and company to look after the best interests of the individuals who use the site.

DISCUSSION QUESTIONS: How likely is Facebook’s new policy to reduce the number of shady advertisers on the social media site? Will news of the policy improve the social site’s brand reputation in the mind of American consumers and legitimate advertisers?

Please practice The RetailWire Golden Rule when submitting your comments.
Braintrust
"Facebook can rebuild user trust and weed out bad ads by listening to its users. "

"Facebook has hidden behind “Freedom of Speech” since its inception because it made economic sense — “everything goes” translates into massive revenue."

"This is one of many steps the online giant is taking to make the site more trustworthy and friendly for users..."

Hopefully Facebook will be successful in its effort to hold advertisers accountable. This is one of many steps the online giant is taking to make the site more trustworthy and friendly for users, which Facebook executives hope will help heal the wounds it’s recently suffered and slow the loss of users.

We can only wish Facebook good luck. As an online utility to post information and enable private transactions, it will require tremendous resources to address unsavory use. It had been hoped that “what man’s mind can create, his character can control,” but I for one, believe that the self-centeredness and greed on which the platform is based and operates will drive it more deeply into the mire.

Facebook can rebuild user trust and weed out bad ads by listening to its users. That’s a win-win for everyone.

Great piece, thanks. I’m thrilled about this. Recent advertising scandals are finally forcing platforms as well as brands to realize and reckon with the issue of data. Facebook is taking a stand because they clearly know that some of their merchants are broken in their dealings in the marketing world. Radical transparency, I believe, has the power to weed out the bad actors and transform the marketing world.

More transparency and rebuilding trust are critical needs for Facebook. Anything they can do to pursue those needs will be helpful. Shady advertisers with poor customer service must be eliminated. This will help address, but won’t entirely solve, the trust gap.

Facebook has hidden behind “Freedom of Speech” since its inception because it made economic sense — “everything goes” translates into massive revenue. Now that there’s been a backlash due to privacy and security issues, not to mention people of all ages abandoning the platform, Facebook is only now portraying itself as a responsible global citizen — once again driven by economic factors — not because of their moral compass or social responsibility.

As Facebook collects more data on its users and improves the ability for advertisers to target consumers, the number of shady drop shipping companies has exploded, especially those pushing fads, like fidget spinners and street wear. Savvy users can spot these companies from miles away by their advertising copy and the user experience around the purchasing process, but many people are getting burned. If Facebook wants to become a true e-commerce hub, they have to get these advertisers under control. How likely is a user who gets ripped off to come back for repeat business, even with another advertiser? Not likely at all. In my opinion, they need to take a page from eBay and require reviews for sellers with their experience starred in an open, transparent way. Banning companies who behave as in the article above is a start, but isn’t enough. In order for them to get banned, they have to have already ripped off customers. Surely there are warning signs or additional information Facebook can request to stop these companies from operating… Read more »
1
|
0
-   Share

One might have thought this is the kind of policy a company would have devised a long time ago on its own (i.e. without having been caught up in intense negative publicity), although of course the changes have likely been under development for some time. I’ll wait to see what happens, but the”FB” model (rapid development that encourages user — and revenue! — growth with little/no oversight) doesn’t make me terribly optimistic.

Whether due to self-serving reputation management or the authentic desire to do the right thing, this move is positive for FB, legitimate adversities and users. The use of user feedback to self-regulate the site should be quite effective and can only lead to fewer “shady” advertisers, a better user experience, and fewer defections. A good move overall.

It’s a good sign that Facebook is taking action, given the breadth of advertisers, websites and networks which don’t necessarily govern themselves. However, it will be difficult for them to moderate based on attributes they can’t directly confirm. There are already armies of fake accounts and movements of vindictive users who can sully the reputation of pages and brands. Facebook will have to protect itself not just from bad advertisers, but from those that wish to use these reporting methods to attack competitors. The success of this program will in part be determined by the integrity of the feedback.

This is a good first step and will require continued long-term investment to build consumers’ trust.

Braintrust
"Facebook can rebuild user trust and weed out bad ads by listening to its users. "

"Facebook has hidden behind “Freedom of Speech” since its inception because it made economic sense — “everything goes” translates into massive revenue."

"This is one of many steps the online giant is taking to make the site more trustworthy and friendly for users..."