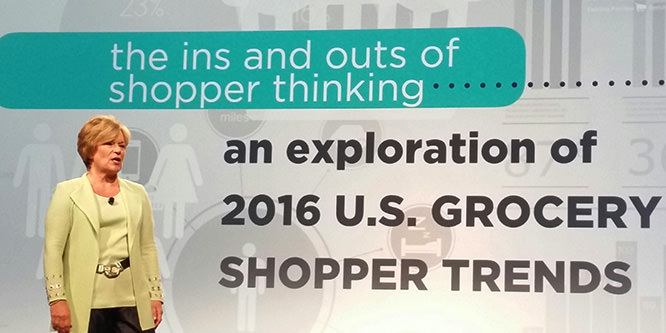 One of my pet peeves covering the retailing industry over the years, and especially supermarkets, has been the propensity of top industry execs who refer to shoppers as “she,” the idea being that females make almost all food shopping decisions. So, it was a belated relief to hear Leslie Sarasin, president and CEO of the Food Marketing Institute at the FMI Connect event in Chicago this week talk about the evolution of food shopping, and the fact that the industry needs to consider a wider variety of shopping habits.

Her presentation highlighted insights from FMI’s “2016 U.S. Grocery Trends” report. While Ms. Sarasin talked about a number of different shopper types, a main point is that many households now shop as teams, with men and women each having major roles in decisions and purchasing. Fifty-eight percent of those responding said they are part of a food shopping team. Among adults responding to the survey, 85 percent said they had at least half of the responsibility for food shopping in their households. Even if that is statistically improbable, it suggests that consumers are more involved in food shopping and now go to food stores not just to stock up, but expecting entertainment, information, nutrition and an interesting experience.

Ms. Sarasin said many families use a “divide and conquer” strategy, with roles being delegated or collaborative. Shared shopping is most popular with Millennials, but significant for all groups. Younger Millennials want to share food shopping to ensure their tastes and needs are met, while mature consumers (71+) are most likely to believe it isn’t fair for one person to have to do all the work. Co-shoppers are also more likely to cook together.

The consumer value equation has also changed. Food shoppers aren’t just looking for a good deal, but many are interested in such things as food that is produced locally, organic products, sustainability, humane treatment of animals, worker rights, avoiding ingredients they perceive negatively, and nutrition and health implications. Interestingly, primary food stores are ranked near the top in terms of groups that are “working for me,” along with family, doctors, friends, farmers, and fitness clubs. Near the bottom are the news media, food manufacturers, the entertainment industry, and fast food restaurants.

DISCUSSION QUESTIONS: What are the most meaningful changes that you’ve seen in supermarket shopping habits in the last five years? How can supermarkets better serve consumers who are shopping with and for a family with multiple and sometimes conflicting needs?

Please practice The RetailWire Golden Rule when submitting your comments.
Braintrust
"The shoppers have evolved, yet the vast majority of retailers have not responded."

"To the extent that others are having input into the grocery list (and/or the shopping itself) one might think that variety will be important..."

"Stores continue to ignore the basis for why many people don’t buy more, and more often, and instead look for “other” reasons."

To the extent that others are having input into the grocery list (and/or the shopping itself) one might think that variety will be important — having the products that meet everyone’s needs/wants. I might also suggest size variety — smaller sizes in those categories where different household members want different products.

In some cultural pockets of the country, food shopping is probably still thought of as “her” job. In more progressive environments and regions, the tasks are shared. Families have preferences as to where they purchase certain products (not Lay’s potato chips) and they don’t buy all groceries from the same retail establishment. Many changes have happened in the last five years in grocery shopping, and all for the better. If one considers that food shopping is not a social outing but a necessary drudgery, then the whole process has to be efficient. Our household uses a mobile app that enables our household to define and share shopping lists by store. If one of us notices that we are getting low on X which we typically procure from establishment ABC, that person clicks it ON on his/her list and it is immediately updated on the other’s list. Whoever goes there, buys it, and marks it OFF. In addition, the same app alerts us of promotional deals taking place at any of those establishments for which we… Read more »
2
|
0
-   Share

Sadly, I’m actually not all that impressed with any major changes in the marketing inside and outside of their stores that most retailers are exhibiting in the past five years. The shoppers have evolved, yet the vast majority of retailers have not responded. There are plenty of indicators, like those mentioned in this article, that could guide retailers on how to position their messaging and assortment, yet the reality is still, “pile it high and watch it fly” … just like it has been for decades.

There are enough affordable tools in the marketplace today to analyze your market by-store and respond with targeting tactics to capture the latest migration of food shopping becoming a family affair, along with other trends in non-food retailing. I’d like to see more dramatic experiments take place in more traditional store formats to respond to these trends. Not all of these changes need to be expensive.

The two biggest changes to shopping behaviors are:

The implication is that grocerants will continue to rise in terms of share of stomach and wallet share. To me, the fact that more men are shopping, or sharing shopping, is a more minor aspect of the myriad shifts in shopping behaviors.

While the FMI research does highlight changing in-store shopping customers and behaviors, it does not necessarily reflect the sea change impact of shopping online. I have not seen the full report that indicates where customers are shopping for groceries. However, my research shows that almost 25 percent of Millennials shopped online for groceries during the past 30 days. Yes, we need to recognize changing in-store shopper demographics and combined shopping behaviors and do a better job in-store to meet these needs. However, the future still is omnichannel which is truly about customers not channels.

Rich, to be fair, Ms. Sarasin did mention that they forecast online grocery shopping to go from 3% today to 10% in ten years, but the focus of her presentation was on team or collaborative shopping.

I really like what Des Moines-based Meredith Corp., publishers of Better Homes & Gardens, has been doing in innovating in family meal planning, shopping list creation and in-store and online shopping. Their moves are all in line with the trends mentioned above. Meredith, with the media industry’s largest database of household grocery shopping habits, acquired All Recipes and Grocery Server. With these moves, a family or head-of-household can now meal plan via recipes, and in the ingredients section of the recipe, if something is on sale at a favorite grocery store, it appears right there with the ingredient. For instance, for a paella recipe, I saw a small Whole Foods picture and ad in the list for wild-caught shrimp. Where I would like to see this going from a media, advertising, consumer utility and favorite grocery store standpoint is with a shopping list/basket that monitors the total basket price across the three or four local grocers that each shopper prefers. That means the shopper’s family could meal plan for the week, save recipes and create… Read more »
3
|
0
-   Share

Kim, of course the conundrum for many retailers, with all the new technology and price comparison schemes, plus the millennials push to have it all (price, taste, convenience), is how is a food retailer supposed to lower prices while improving quality and service, and still make a buck?

Conundrum indeed! It will be interesting to see the trends in the trade dollars the brands give to retailers for promoting their goods as advertising becomes less effective, and companies like Meredith decide to get “in the middle” of those shopper marketing dollars with moves like I mention. Private label trends will also be interesting to track.

Here’s something interesting from the news here in the Twin Cities: “A 3,300-square-foot F&F clothing boutique will be part of Hy-Vee’s 91,000-square-foot grocery store in Lakeville, Minn., selling men’s, women’s and children’s clothing, shoes and accessories. F&F is a British company that sells clothing similar in style to Forever21 and H&M offerings at Old Navy prices.”

Supermarkets need to have better customer service. This means focusing on the reasons why people come to their stores, including eliminating out of stocks and decreasing the wait times in line. Simply adding a few more cashiers can really help a grocery store. Also, increasing their order cycles can minimize out of stocks. How hard is this? Despite these continual issues, stores continue to ignore the basis for why many people don’t buy more, and more often, and instead look for “other” reasons. Focus on the basics and enjoy incredible growth at little cost.

The most meaningful changes I’ve seen in supermarket shopping habits are trending towards free-range and organic or towards dietary restrictions. Even in more mainstream shopping markets like Publix and Safeway I’m seeing gluten-free and dairy-free popping up on every aisle.

Programs like Instacart and Blue Apron make never going to the grocery store a reality. I agree with Liz that “day-of” shopping trips and “heat and eat” have also become popular options, bringing stores like Trader Joe’s to the forefront.

While IoT would benefit shoppers in knowing whether an item was on sale or out of stock, a more simple solution would be to provide more information about the foods that stores are already selling. More prominent labels that explain a foods origin, processing and allergen information would make for a more efficient shopping trip for families with different tastes and preferences.

Healthy, organic and fresh choices are more prevalent then before, as well as the use of both prepared meals and partially prepared meals. In the local whole foods in my neighborhood, you can predict the shopping patterns based on day of week. Groceries some nights, chilled or partially prepared foods week nights, hot prepared food Friday and Saturday nights. Also the use of delivery especially for known replenishment items is something that has grown in the last five years.

Braintrust
"The shoppers have evolved, yet the vast majority of retailers have not responded."

"To the extent that others are having input into the grocery list (and/or the shopping itself) one might think that variety will be important..."

"Stores continue to ignore the basis for why many people don’t buy more, and more often, and instead look for “other” reasons."