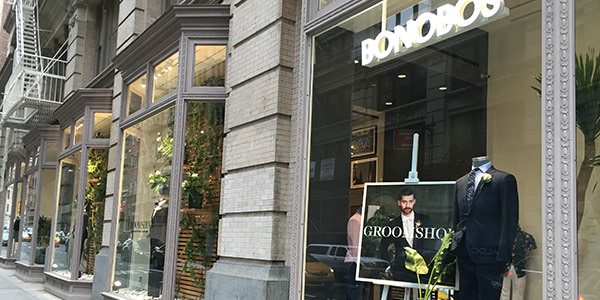 The recent speculation concerning possible plans by Amazon.com to open hundreds of bookstores has brought a renewed focus on the role brick and mortar stores will play for pure play e-tailers going forward. For some, the future may mean fully functioning stores. For others, there will be guideshops, which allow consumers to try on/out products before ultimately ordering them online for delivery to their homes.

Bonobos, a men’s clothing merchant, first began opening its guideshops in 2011. Each small shop, as described in a 2014 RetailWire article, typically has a footprint of 1,500-square-feet or less with space to display a limited range of apparel, along with a fitting room. An emphasis is placed on personal service, and Bonobos.com acts as the guideshop’s virtual stockroom.

Last July, a Bonobos company spokesperson told Forbes that more new customers come to the site through its guideshops than via other means. First-time customers who find Bonobos through the guideshops also spend more than those who first shop Bonobos online.

A recent New York Post article reported on plans by Paul Evans, an upscale men’s shoe website, to open its first guideshop on Christopher St. in Manhattan on March 1. A second guideshop in New York’s financial district is also planned.

The Paul Evans shop, according to the Post, will simulate a “man cave” complete with comfy club chairs. Customers will be encouraged to try on the company’s Italian footwear with an average price of $389.

“I asked Andy Dunn (CEO) of Bonobos if he could do it all over, what would he do differently, and he said … ‘[Open] guideshops sooner,'” Evan Fript, co-founder of Paul Evans, told the paper.

Do you expect that e-tailers will open more guideshops or traditional stores as they move into brick and mortar environments? What do you see as the relative pros and cons of each approach?

Please practice The RetailWire Golden Rule when submitting your comments.
Braintrust
"This emerging version of omnichannel retailing has promise not only to e-tailers but also to traditional retailers who can use the concept of a guideshop to reduce its needed square footage of selling space."

Guideshops can be an effective way to sell higher price points (especially apparel) and generate more traffic to websites … IF they are in the right cities and in physical locations with enough traffic from the target customers.

A major advantage of guideshops is the very small footprint which can be fit into many urban centers where a larger store front would not be possible.

A major critical success factor will be the store staff working in the guideshops. They must have a much more hands-on, personalized approach and be very comfortable guiding customers to purchase from a virtual shelf as opposed to physical items on display.

Everything old is new again. Let’s move up to 40,000 feet and see what pattern might emerge. “Lifecycle” is not a theoretical nor man-made concept, it’s a function of nature itself. Things are born, grow, mature, die and return. (I’m not sure if that happens to the human soul or not, but who knows?)

So bookstores are returning thanks to Amazon after being obliterated thanks to Amazon. Seems to me this “guideshop” idea isn’t all that new either. I remember my parents dropping into the Sears catalog store to see the refrigerator or whatever and then ordering it from the catalog — which is what the internet used to be called.

The secret lies in who has the courage to lead the rebirth.

Guideshops is an appropriate name for e-commerce showrooms. These online retailers should not try to be or act like their brick-and-mortar competitors. With the slowing of traditional brick-and-mortar retail development, such showrooms may be inexpensively developed in strip malls and may even have positive returns in larger shopping malls.

This emerging version of omnichannel retailing has promise not only to e-tailers but also to traditional retailers who can use the concept of a guideshop to reduce its needed square footage of selling space. An example of a brick-and-mortar retailer doing this is Gap. Gap was able to grow its online sales by 21.5 percent while shrinking its square feet in retail by 8 percent.

Retailers of different merchandise categories and business models will do different things. For example, bespoke men’s clothier Indochino began as an e-retail only business and has now opened seven showrooms in major cities. These showrooms (not quite guideshops) afford the consumer the opportunity to see, touch feel and be fitted, but the finished product comes in a package to one’s home. The same can be said for furniture stores where one sees, selects, and then one can go home and order online or order in the showroom. Is this showroom another form of guideshop? I would say yes, but it isn’t new. The real question is, how much incremental sales can each of these different businesses derive from opening guideshops? To some product categories it may and to other merchandise categories it may not be worth doing.

I think all of retail is coming to the realization that the primary medium in its engagement mix is a store. It’s where the most robust shopper engagement occurs. It’s where the brand is most dimensional. It’s why retail brands are fundamentally different than CPG brands and therefore need to be managed accordingly.

Most are not, therein lies the rub.

The Bonobos model could be the future for a lot of different kinds of retailers. Combine extraordinary customer service with a great fit, and it’s hard to imagine shopping elsewhere. Combine that with the obvious supply chain advantage of not having to stock every color and size, and the model can be very profitable. My son is hooked.

I might be dating myself but we used to just call these boutique stores. The action is definitely returning to the small-scale format where they can control everything about the brand instead of leaving it to whoever will work a shift after they fog the mirror and prove they were breathing.

Rolls Royce had “guide shops” from the beginning, but this is a good lesson in clientele experience and providing hospitality. The big takeaway is the ability to “theme” the retail space in lieu of inventory fixtures.

In the immediate gratification world we live in, if you bother to go to a store, don’t you want to come home with what you purchased? I can see the guideshops working for big ticket, bulky items, otherwise I think you either want the convenience of the internet, or the ability to get what you want without waiting.

This is a significant risk as we have seen with the Walmart setback. What works best is not only dependent on the consumer patronization, but there is also the company’s ability to address consumer expectations and needs. We are making investments that more than ever need to see a return to increase company revenue. With the average retailer having limited if any marketing tools in place, the risk will be far greater. Retail needs to first assess, retool and maintain marketing departments in order to downsize the perils in efforts like we see in this discussion.

I’ve written about the guideshop trend several times now and there is a lot for retailers to like about this format. Operating costs are reduced because of smaller footprints, lower inventory and less need for labor hours maintaining a balanced presentation on the floor. I’ve also had candid conversations with multiple employees in these stores and the consensus is that they love the work because they get to spend a much higher proportion of their time actually serving customers. Since satisfied employees have been shown to deliver better service this should give guideshops another advantage over their retail competition.

Today and looking into the future, I see that e-tailers have the distinct advantage of entering the marketplace in many different ways, one of which is a guideshop. Based on their marketing objectives and how they are looking to satisfy their customers’ needs, e-tailers can shift to physical space through interactive kiosks, pop up stores, store-in-stores or many types of mobile retail. Additional paths are through augmented and virtual reality. My design firm specializes in disruptive retail, which we define as “a highly stylized, specialized and functional environment that facilitates a transaction in the short or long-term.” Disruptive retail is based in experiential design and connects the ease of online shopping with a highly personalized in-store experience. And, no, a guideshop is not for every e-tailer. This article made me think of Boston Proper, an e-tailer that Chico’s bought and took into the marketplace through a collection of highly stylized, digitally integrated concept stores. Each store featured personal consultations, a Tech Table with an interactive catalogue, so customers could assemble outfits digitally, a swanky seating… Read more »
0
|
0
-   Share

I think the trend of e-commerce retailers turning to traditional brick and mortar environments will continue to gain momentum. When consumers are able to try on and/or interact with products, they are more comfortable making a purchase rather than simply reading reviews online.

The concept of showrooming or ROPO (research offline, purchase online) is now commonplace in today’s retail environment. The primary pro of using guideshops is retailers can now control that showrooming/ROPO process. The only con I see for this phenomenon is the expense of leasing a premium location for an e-tailer’s guideshop.

I think that e-tailers have recently begun to recognize the importance of brick-and-mortar stores. Regardless of whether online businesses open guideshops or traditional stores, one thing is clear: ROPO (research offline, purchase online) and showrooming are two trends that continue to make a heavy impact. Many consumers will go into physical stores to try on or investigate products, and then go online to make a purchase. That being said, it is paramount for retailers to have the in-store experience synchronized, omni-channel and strategized.

Braintrust
"This emerging version of omnichannel retailing has promise not only to e-tailers but also to traditional retailers who can use the concept of a guideshop to reduce its needed square footage of selling space."