How great is it to work at the Apple Store? 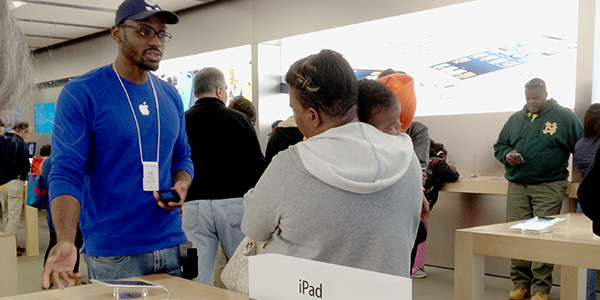 The head of Apple’s retail business, Angela Ahrendts, is all about the company’s culture. And it’s that culture that Ms. Ahrendts is counting on to continue to separate Apple from all comers in the years ahead.

In an interview with Fast Company, Ms. Ahrendts talked about her trips to 40 different markets to meet with employees. She took that time to listen and learn. From there, she worked out how she could collaborate with and build trust with team members.

Whatever Ms. Ahrendts is doing, it must be working. Apple’s retail business ended the year with its highest retention rate ever — 81 percent. She believes so many stay with Apple is because they have a connection with the company’s culture.

According to Ms. Ahrendts, Apple was created “to change people’s lives.” It is that shared mission that is behind a service culture that has won the company legions of customers.

Ms. Ahrendts says she views associates in Apple’s stores as executives who introduce the products the company creates to “the customer in a wonderful way.”

Apple earned four out of five stars (based on 6,739 reviews) on Glassdoor as an employer. Eighty-two percent said they would recommend working at Apple to a friend and 95 percent approve of CEO Tim Cook.

When you think of Apple’s culture, what comes to mind? Are there lessons in employee motivation that you think other retailers should take away from Apple?

Please practice The RetailWire Golden Rule when submitting your comments.
Braintrust
"When Apple culture is applied to retail it looks almost futuristic — chic like a club with a velvet rope line anyone can cross if they know how. Apple employees aren’t "associates," they are "Geniuses.""

"Each new employee typically has some knowledge of the systems and product being sold and serviced, but they receive intensive training — online and in person — to ensure they can tackle practically any problem and discuss with authority all of the products."

8 Comments on "How great is it to work at the Apple Store?"

When I think of Apple’s culture I think of fanatical devotion. If you’ve ever written a piece that says anything remotely negative about the company (and I have), you are bombarded with people who are sure you a.) don’t know what you’re talking about and b.) are an ignorant person at best. So it’s only natural that the folks who work there (who I suspect are paid more than $7.75 per hour) would be devoted to the place. Most retailers won’t be able to take any lessons away from Apple. They’ll tell you things like “Apple only sells three products, it’s easy” or “With their margins, they can afford to coddle their people.” I wish they could see this in another way, but I don’t think that’s going to happen. Retailers do have to find their way to a new store model — I do believe the old one is dying — but it’s going to take a long time and different role models. I think a retailer like The Container Store might prove to… Read more »
0
|
0
-   Share

Apple culture seems to be built around the notion of community, diluted perhaps a bit over the years with the introduction of the iPad and the iPhone, but strong enough to still give it the feel of a benign cult despite its mass appeal.

It’s about technology, of course, but more importantly its about a style, an aesthetic, maybe even a perceived ethos, the creed of the wired outsider, playing the game, but with a certain élan.

When Apple culture is applied to retail it looks almost futuristic — chic like a club with a velvet rope line anyone can cross if they know how.

Apple employees aren’t “associates,” they are “Geniuses” when behind the “bar” and techno-hip guides to the mysteries of technology when they are on the floor. In short they are real people — people with openly acknowledged skills who cooperate with each other.

How about starting with creating an atmosphere where employees are respected, allowed to be individuals, trusted and are seen as co-conspirators by the customer?

Not a bad place to start.

Training is the key to the success of Apple’s retail team, plain and simple. Each new employee typically has some knowledge of the systems and product being sold and serviced, but they receive intensive training — online and in person — to ensure they can tackle practically any problem and discuss with authority all of the products. The people staffing the Genius Bar get more training on systems problems and the sales folks get more on the products. Sure, there are developmental activities like team building exercises and role play, but it’s the training that sets them apart.

My first reaction is to ask how most retailers can do what Apple has done. Look at the profit margin, look at the quality of the product, look at the devoted customers.

But wait: take a look at Costco, Publix, QuickTrip convenience stores, REI and those are the ones that just come to mind quickly. It all boils down to hiring right, training, empowerment, respect and recognition of the value that great front-line employees bring to the operation. Marketing and promotion may get the customer in the door but it is what happens within the four walls that determines success.

First, we all have come to understand that Apple does things differently from most. (This is a computer manufacturing company that continues to teach retailers how to sell!) That is the cultural difference of the company. From the product itself to the way it is displayed, advertised and sold. As to the store associates’ commitment to the brand and enjoyment of the work, it helps to have great products to sell!

Perhaps it comes down, once again, to those two directional foundations to retail success:

When I think of Apple culture, I think about New York. I remember how “cool” it was to live in the capital of the world (and I’m from Boston!) I remember picking-up on the 100s of attributes that added up to the “New York state of mind.” I’ve lived in Palo Alto for 18 years now. I’ve met people who’ve experienced the Apple culture on the inside, during all phases of its history — I could tell you stories, just like NY — but fuhgeddaboudit, that’s not cool and you’ll never understand. That’s culture. You can’t understand culture with your head, it’s in the heart. What’s the point? The store visits start in the heart, they start with management asking: Where is the love? How do we create meaning? Why do we exist? The question is not “how can I be like Apple?” It’s more: “How can I be more like me?” Customers and employees get authenticity and trust and it’s through those attributes where relationships are established. Do people work for you for health care benefits or… Read more »
0
|
0
-   Share

Boutique tech retail is all about community and Apple rules the realm. I frequently visit Apple stores in three cities and am consistently impressed with the professionalism and product knowledge of the sales staff. Connected sales associates are a key asset here and in my opinion, their job is made easier by the stellar design of the stores and products.

The greatest takeaway to recommend is to set employees up to succeed. Providing a well designed environment, proper training and products customers are loyal to buying creates a winning team.

Braintrust
"When Apple culture is applied to retail it looks almost futuristic — chic like a club with a velvet rope line anyone can cross if they know how. Apple employees aren’t "associates," they are "Geniuses.""

"Each new employee typically has some knowledge of the systems and product being sold and serviced, but they receive intensive training — online and in person — to ensure they can tackle practically any problem and discuss with authority all of the products."