Is it time for Victoria’s Secret to say goodbye to its print catalog? 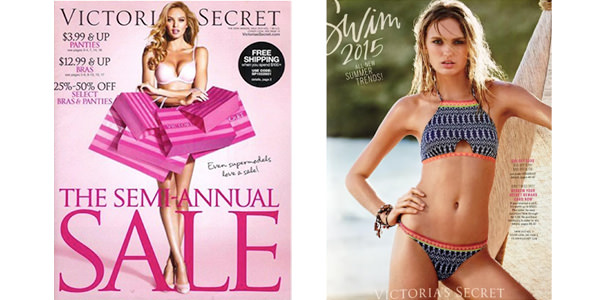 L Brands recently indicated it will either outright eliminate or significantly reduce the mailings of its iconic Victoria’s Secret catalog as part of a larger move to focus on core products and digital advertisements.

The company is also reorganizing into three business units — Victoria’s Secret Lingerie, Pink and Victoria’s Secret Beauty — cutting 200 home office jobs, reducing its promotional offers, and eliminating some non-core categories, including swim. The changes come as the lingerie chain has been outperforming much of retail with comparable-store sales ahead five percent in 2015.

The Wall Street Journal was among those that reported the catalog is being discontinued, although it wasn’t certain if it was only being de-emphasized. L Brand officials declined further comment.

Touching on the catalog closing, L Brands said in a statement that it is “evolving how the business connects with customers through more focus on loyalty programs and brand-building engagement rather than traditional catalogues and offers.”

The catalog, featuring scantily clad supermodels, has been around for at least three decades. The retailer typically sent out between 250 million to 300 million copies in 22 installments globally each year.

Catalogs are seen by many as bad for the environment and as mailbox spam. Retail Touchpoints also noted that, in addition to expense, it’s more difficult for brands to target paper catalogs to specific customer groups or individuals compared to digital forms of marketing and communications.

The catalog business has seen a resurgence or at least stabilized in recent years.

In a research note entitled, “Every Guy’s Worst Nightmare,” Citi analyst Paul Lejuez, estimated the company would save about $100 million by eliminating the catalogs, but the move could hurt sales “as the brand may be less top of mind with male and female customers long-term.”

DISCUSSION QUESTIONS:
Should Victoria’s Secret discontinue its catalog? What do you see as the pros and cons of such a move?

Please practice The RetailWire Golden Rule when submitting your comments.
Braintrust
"You could make the case that Sears began its irrevocable slide downward when it eliminated the Dream Book."

"I would caution Victoria’s Secret against dropping the catalog completely — to some degree it’s synonymous with the brand image."

14 Comments on "Is it time for Victoria’s Secret to say goodbye to its print catalog?"

The question here is whether companies can correctly gauge the impact of a catalog beyond mail-in sales through catalog order sheets. You could make the case that Sears began its irrevocable slide downward when it eliminated the Dream Book.

I wonder if L Brands has considered restructuring the catalog and its frequency, as Restoration Hardware has done.

What always strike me as very, very strange in these types of decisions are the sweeping pronouncements of new strategies and directions. Why guess when you can test? Test and measure results.

Direct mail catalogs and digital ads are both very measurable. The reality is that some catalogs probably work very well at certain times of the year to bring certain things to top-of-mind, so that customers will then search and purchase online or in-store. Valentine’s Day comes to mind as a prime example.

In today’s omnichannel world, retailers and brands need to engage consumers when, where and how they are shopping. One size or one form of communication does not fit all.

Results count — everything else is conversation.

Three hundred million copies and 22 annual ships definitely stopped making sense a while ago. I don’t think Victoria’s should eliminate the catalog entirely, they should convert it to a “mag-a-log” format, use it to tell good stories around the brand and the products and ship maybe four issues a year. If this transition is executed well the catalog will retain it’s iconic status and be a useful tool for driving shoppers to e-commerce or the stores.

The heyday of the print catalog has passed, for many of the reasons mentioned in the article. The production and mailing costs are high, and e-commerce provides a more cost-efficient and targeted way to reach consumers.

But I would caution Victoria’s Secret against dropping the catalog completely — to some degree it’s synonymous with the brand image. And judicious use of direct mail and print vehicles (fewer pages and less frequency) can still be part of an effective marketing menu.

Being a one-time paperboy has not precluded me from being biased against print catalogs for a variety of reasons. True, catalogs create an extra touch point and act as a memory jogger for brands, but the demographic for Victoria’s Secret clearly skews towards those less inclined to have an affinity for paper catalogs. The brand can readily make up for the lost medium by leveraging digital communications and social media, so this sure seems like a good forward-thinking move to me.

No. The catalogue makes up for the fact that there are still many Victoria’s Secret stores in locations people do not visit as much, like malls, etc. Watching the females in my family, they always get the catalogue and share ideas on some of the outfits. Now us guys in the family do not do that. All guys, kids and grandkids are taught that in this family the Victoria’s Secret catalogue can give a guy “cooties” which is a horrid situation that draws the boogieman to you room at night. None of the guys touch the thing. Really, not even the old guys. We do hang with Harbor Freight catalogues.

It’s an iconic brand statement. Discontinuing is a bit much. Reducing makes sense.

Nothing is a given and everything depends on the degree of implementation. I believe that reading the printed catalog — for those who want to receive one — is a passive activity whereas surfing the Web is a proactive activity. Therefore, I would think that the printed catalog would get consumers’ attentions faster than surfing the Web, and print catalogs are easier to browse than an electronic catalog specifically targeted and sent to a smartphone.

If you were going to browse through a catalog, through which would you prefer to browse? Printed or electronic?

If a retailer can manage to send the optimal number of printed catalogs to selected targets, they should continue to do so. If something catches one’s eye and the consumer buys that and possibly other products as a result, it’s a win!

Catalogs are expensive to produce and mail and they do take down trees, so the degree to which they are printed and mailed matters to everyone.

Flat out discontinuing the catalog seems like it will have a large negative impact on Victoria’s Secret’s Direct — approximately $1.5 billion in sales.

As a guy (who occasionally buys on impulse for his wife), I’m sure I’ll buy less if there’s no catalog to spur my impulse. The catalog too is such a significant piece of the brand, Victoria’s Secret will certainly need to work hard to develop another platform from which to broadcast its brand. This is a concern not only for Victoria’s Secret Direct sales, but for store sales as well.

Correlation does not imply causation.

Retail selling models may become distorted with over emphasis on a given attribute, such as a reliance upon a promo tactic, but that doesn’t suggest the demise of the brand’s relevance. Rather it suggests the target definition is not uniformly understood across all points of engagement. To not fix that can infect the brand and increase lack of relevance across the model.

How D2C media, analog and digital, are deployed will be determined by their performance in driving the business whether it be brand health through to profitability. I doubt the catalog is banished; distribution as a mass medium probably is. Print has a role and it over-indexes among Millennials vs Generation X. Time will tell.

Victoria’s Secret needs to determine if they want to cut catalogues simply to put dollars to the bottom line or reinvest the dollars into other channels. Simply cutting spend by $100 million is not a marketing strategy. They will need to figure out what media or promotion will get this reallocation or they will comp negatively without the catalogues, which are obviously driving business.

Remember, the catalogues are just a vehicle for their robust CRM efforts. It is the CRM efforts through segmented mailing that is the key here. Whether driving in-store or online purchase, the catalogues are a highly effective tool in the purchase cycle for many shoppers. Lastly, as an advertising tool, the catalogues provide a format to showcase “sexier” product that might not be appropriate for consumer magazines and websites, as well as provide targeted, limit exposure to merchandise that is being product or price tested and should not get mass exposure.

Come on folks, this is hardly like eliminating the JCP catalog!

I’m not sure how much — if any — use it ever saw for what was its ostensive purpose, but it was remarkably effective at keeping peoples minds (and eyes and … ) focused on the company, and that’s what I always thought marketing was all about.

Does it still work? would something else be just as, or more effective? I don’t know, but it would be a (an inter)national tragedy to be too hasty.

I agree with most of the comments — reduce, but certainly do not eliminate. The catalog is part of the brand; tread carefully with brand change. They do distribute catalogs based on customer purchase volume, so perhaps set higher thresholds.

A great move is that after many years, they are merging e-commerce with stores. Finally, you will be able to take a SKU from a store and search online. Clearly this enables ship from stores, which should have huge positive impact on international e-commerce sales, and greatly reduced shipping costs.

I think reducing the frequency of the catalogs first would be a good way to test how they impact core metrics. Since J.C. Penney brought their catalogs back after axing them a few years earlier, the same could happen for Victoria’s Secret. Sure, they would save money by not sending them, but if catalogs are driving significant sales across channels, it’s best to keep them around. Using catalogs to tell a brand story and less to promote clearance items could improve the ROI and margins resulting from them.

Braintrust
"You could make the case that Sears began its irrevocable slide downward when it eliminated the Dream Book."

"I would caution Victoria’s Secret against dropping the catalog completely — to some degree it’s synonymous with the brand image."