Is Target getting its grocery act together? 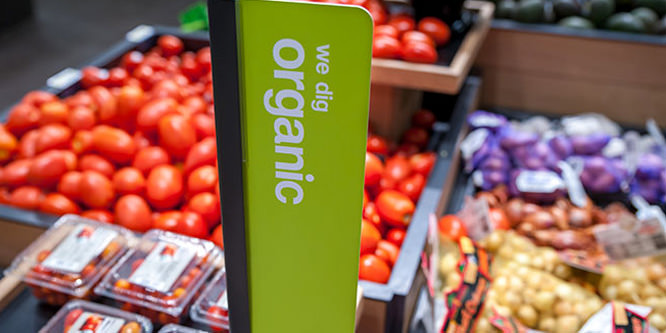 Back in April 2015, Target CEO Brian Cornell called food a “critically important area of opportunity” for the retailer. He also said remaking the chain’s grocery business would not happen overnight, estimating it would take up to 18 months to accomplish his goal of making “Target a food destination.” Some 16 months in, it appears as though Target is still a ways from achieving the vision set by its CEO. Will it ever get there?

On the company’s earnings call back in May, Mr. Cornell reported that comps were down slightly in grocery. While sales of perishables were up, the center store declined as a result of major resets that included product assortment, visual presentation and category adjacencies. Even so, Mr. Cornell asserted that the changes better positioned Target for success over the long haul.

Among the changes Target has made include moving nutrition bars into the center store. In doing so, Target has established itself “as an industry leading destination for these items,” Mr. Cornell said in May.

Supply chain and in-store food handling issues continue to be a major problem for Target as it seeks to remake grocery. The chain is primarily supplied by C&S Wholesale Grocers, while rival Walmart has developed a self-distributing infrastructure.

Spoilage, as a Wall Street Journal article points out, is a major challenge for Target. The chain is simply not driving frequent enough trips to turn inventory before it goes bad.

“They will continue to have a problem with spoilage,” Kurt Jetta, CEO of TABS Analytics, told the Journal. “They need to double their traffic for perishables to be successful.”

DISCUSSION QUESTIONS: Which of Target’s actions to remake its grocery business do you see as most positive? What work is still needed in order to turn Target into a food destination for more consumers?

Please practice The RetailWire Golden Rule when submitting your comments.
Braintrust
"Target might be better off seeing what happens to the rest of the store sales when they pull grocery from a market."

"As Brian Cornell admits, this is an extended journey to make Target a food destination."

"Target hasn’t been in the grocery business long enough to be a destination for shoppers. Clearly it is an add-on to existing trip to buy other items."

13 Comments on "Is Target getting its grocery act together?"

To expect to become a major supplier of grocery in 18 months was too aggressive. It took Walmart several years to be accepted as a viable grocer. Too many consumers still do not look at Target for food. They are still the better fashion retailer over Walmart and that is where they will stay for a few more years until their customers realize that food items are also at the store. I see more consumers just walk on by the food sections and that needs to change. Target needs two things, a major supermarket executive to take over food and a major perishable executive to keep produce on par with leading supermarket chains. It is still difficult for most shoppers to buy a white top and a roasting chicken in the same shopping basket!

Here in Minneapolis there has been a lot of media coverage about Target’s partnership with the MIT Media Lab and IDEO on the future of food. I think this is one example of how Target will continue to win in grocery. A quote:

“By combining the boundless curiosity and discovery of MIT’s Media Lab and IDEO’s human-centered approach to design with Target’s knowledge of retail, we can reimagine the future of food,” said Greg Shewmaker, one of Target’s Entrepreneurs-in-Residence, who is leading the Food + Future coLAB.

You have to wonder why Target even stays in this business. Their assortments are weak (in my humble opinion), out-of-stocks remain an issue and, really, who thinks “Target” when they think grocery? Target might be better off seeing what happens to the rest of the store sales when they pull grocery from a market. At least here in Atlanta, their stores are not nearly big enough to support a large-scale grocery effort relative to even our small Walmarts.

Of course, just as shoppers do not “count” those one- or a few-item trips as shopping, retailers don’t “count” them, either. That is, they seem insignificant — but they are TRAFFIC. Walmart didn’t become the number one grocer in the world by futzing around with the inanities that come up in these discussions.

Just remember: GROCERIES = TRAFFIC, period. As human animals, you must drink more often than any other thing (other than breathe). You next most often need to eat! There are NO other urgent demands for the human population.

As Brian Cornell admits, this is an extended journey to make Target a food destination. I believe he has the right team in place, headed by Anne Dament. The challenge is to move out of the middle of the market where it currently resides. At the moment it is neither a full service or a specialty grocer. As a result, grocery shoppers do not perceive Target as a primary destination for either stock-up or fill-in items.

Target recognizes the challenges associated with the distribution of grocery and perishable items. While the company has expanded its offerings of wellness items, focusing on seasonal produce and working to localize the offerings in each store, there is still much more to do.

However, this may be an opportunity to use its “cheap chic” advantage against Walmart, taking a page from Walmart’s relatively successful move into the supermarket business. In essence, borrow lessons learned from the Walmart food business similar to what it did with the non-food aspects of the business when it gave customers a viable alternative to Walmart.

I believe Target has to re-position the grocery department within their stores to put more emphasis on the categories. Walmart has a separate entrance into their food area while in most Target stores the food is on the far side from the entrance. Additionally, they need to make consumers more aware of food by including the categories in their ad campaigns. Most people still don’t view Target as a food destination.

I think Target is wasting their time with food. About 50 percent of grocery market analysts don’t even consider them a competitor. The grocery department is 220 feet from the checkouts. Perishables are minimal and poor quality. If a store is next to a Wegmans or H-E-B, etc., having grocery is totally pointless. They are not going to fix it because they would have to start over from scratch. Grocery at Target was about as smart as them going to Canada. In a few locations they are lucky and doing quite well, like in the downtown mall in Minneapolis. Otherwise they are only doing a few hundred-thousand per week while the Walmart down the street is doing $1 million per week in grocery. I suggest keeping the dry grocery and ditching the meat and produce. The only way Target is going to improve grocery is to make grocery the first thing a customer sees when they walk in. Hiding it nearly 300 feet from the entrance, is preventing them from making it work.

Let’s get simple here. Grocery shopping is a tradition in many families. They go to common places for daily stuff, other places to stock up. Target can haul in the best food people out there and carry all the right assortments and get good scale technology — and last of all, great prices. But tradition is the issue. To really lift the traffic you cannot depend on just Generation X or young Millennials. You need to re-market and shift the Target image. It might range from core media work to shifting store layouts so there are food checkout areas. This is a mental challenge. Walmart did it with time and prices and good ads. Store design also was a major factor. Target can do it — but I would lock in on a slow, more planned process that Wall Street is not fixated on.

Our local Target’s grocery area is too small to compete with the full-size supermarkets that surround it. It’s fine to pick up a few fill-ins but not to do a weekly shop. (Do people still do that?) The traffic in the grocery aisles seems to be far greater than in the small perishable area.

My suggestion for a test is a little more conservative than Dr. Needel’s. Target should test getting out of the perishables business to determine the impact on the remaining grocery sales. True this may be a lower margin area but less labor-intensive and spoilage is far less of an issue.

Target hasn’t been in the grocery business long enough to be a destination for shoppers. Clearly it is an add-on to existing trip to buy other items. I think they have a long way to go and inventory turn in perishables will continue to be an issue. And as a shopper, the red meats look a little too red in the packaging!

They might start with cooler case up front and some signage that points to the full assortment hidden away in the store.

Target still needs to solve the “fresh” issue. Most consumers don’t think of them in that regard — grocery trip only. And that’s a tough one. It would take bringing grocery (especially fresh) up front and visible for starters, and that alone, given 1800 behemoth stores, is quite a cap ex challenge.

So first step: commit the cap ex to show that you’re serious about fresh. Second stop: take the hit while consumers adjust to that idea.

Translation of corporate-speak is needed here: “area of opportunity” can mean just that, or it can mean it’s some area you’ve never had success in and never will. Target has met the “never had” standard and sad to say, but I see nothing that indicates it won’t meet the “never will” as well.

Target proclaims to be a discount store, but their food prices are high. They claim to be chic, but the assortments are boring. They claim to be a leader in first to market, but in grocery they rarely are. They claim to run the cleanest discount stores, yet the sections are full of past date produce. I don’t believe their grocery assortment delivers on the Target promise. This likely is not only leading to weak grocery sales, but since the message in this category is not consistent with the promise could lead customers to question the entire Target offering.

Braintrust
"Target might be better off seeing what happens to the rest of the store sales when they pull grocery from a market."

"As Brian Cornell admits, this is an extended journey to make Target a food destination."

"Target hasn’t been in the grocery business long enough to be a destination for shoppers. Clearly it is an add-on to existing trip to buy other items."