Is the National Labor Relations Board ruling a game changer for workers? 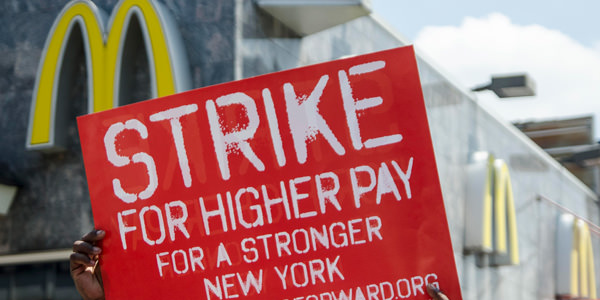 Unions, labor advocates and key players in warehousing, construction, fast food and home healthcare are brainstorming strategies in the wake of a recent National Labor Relations Board (NLRB) ruling.

The NLRB said in mid-August that a Silicon Valley recycling center was a “joint employer” along with the staffing agency that provided the center’s workers. The ruling determined that companies using workers hired by another business are still responsible for labor violations and could be required to bargain with unions representing those employees.

The ruling is the latest example of gains made by labor groups advocating for better pay in traditionally minimum-wage industries such as retail and fast food. Until now, the NLRB has been reluctant to redefine dual employer status, relying on the precedent that a company must exercise “direct and immediate” control over the workplace in order to qualify as a dual employer.

In light of the new ruling, franchisers like McDonald’s could potentially be held liable for hiring and firing decisions made by an individual franchisee. Routine business decisions like firing a contractor or structuring operations can now be examined in light of how they affect union organizing efforts.

“It’s a seismic shift,” said Victor Narro, project director at the UCLA Labor Center, to the Los Angeles Times. “This is not focused just on labor organizing, but every kind of labor law.”

Aftershocks in the American workforce are expected. Companies still affected by the recession have increasingly turned to temporary workers, who can be shed at a moment’s notice.

“The rise of franchising, contracting and other similar employment practices has made it harder to enforce worker protections like minimum wages, overtime pay and the right to unionize,” wrote Rep. Jan Schakowsky, U.S. Representative for Illinois’s ninth congressional district on the Huffington Post’s Politics blog. “Employers who help set those rules will no longer be able to utilize temp agencies or contractors to evade their responsibilities to workers who provide services or create goods on their behalf. This isn’t just a win for workers — it’s a win for businesses that do right by their employees because it requires their competitors to rise to their standard.”

The case is not closed, however. According to Forbes, two NLRB members, Philip A. Miscimarra and Harry Johnson, excoriated the majority in a 28-page dissent.

“The Board is not Congress,” they wrote. “It can only exercise the authority Congress has given it. In this instance, our colleagues have announced a new test of joint-employer status based on policy and economic interests that Congress has expressly prohibited the Board from considering.”

Do you approve or disapprove with the NLRB’s ruling on “joint-employer” status? Do you expect the ruling to stand? Who really wins and who really loses long-term if it does stand?

Please practice The RetailWire Golden Rule when submitting your comments.
Braintrust
"I don’t think this could possibly stand as described. The "joint-employer" idea goes one step too far."

8 Comments on "Is the National Labor Relations Board ruling a game changer for workers?"

First, I doubt the ruling will stand in court challenges. If it does, then the key question will be whether using “contract employees on your own site” is extended to mean “companies using franchise models are responsible for the employees of their franchisees” (the oft-cited “this means McDonald’s” claim). That would be a real stretch that would indeed be a rewrite of both franchise and labor law by the NLRB.

Whether this will ultimately turn out to be a good thing for workers remains to be seen. There’s just something about that “law of unintended consequences” that always seems to bite efforts like this in the behind. But one thing is for sure — the folks at the NLRB have handed their labor union brethren a big win — at least for now.

I disapprove of any government regulation that dictates how a business handles its personnel. If the ruling does stand hopefully our industry colleagues will continue to outsmart the government and continue to find loopholes to keep us profitable. I trust the retailers will win as usual. Those who stand to lose are those at the bottom who will lose their jobs. Most likely we will see low-level employees replaced with higher-paid, more productive employees or simply replaced by technology.

I don’t think this could possibly stand as described. The “joint-employer” idea goes one step too far. But there must be changes made to protect workers from getting taken advantage of with regard to contract work and cutting hours, if both are used to cut costs of benefits. I am not sure how to implement solutions like that, but for the past several years the use of these tools by companies has been excessive.

I agree that I don’t think this can stand as stated.

As a former franchisee and then part of the management of a company that had both company ops and franchisees, I can tell you that under our system, we had NO control of what employees were hired, fired, hours that they worked, or what they were paid. I realize that times have changed and franchise systems have gotten tighter, but I still don’t see how McDonald’s can be held liable for what happens between a franchisee and its employees.

I see this as a play by our current government leadership to expand unionization.

There are so many combinations of corporation/franchisee/agency/worker/contractor/work rules that applying any of these rulings becomes an exercise in business model analysis.

At their core, all of these are trying to figure out how to apply core worker protections when labor is not directly employed by the top level corporate brand.

My sense is that this is the beginning of the process to establish a 3rd class of workers beyond employee and (true) contractor. There will be lots of iteration and conflict along the way. So “joint employer” looks like the first negotiating stance in a long process.

Non-elected agencies and officials must not be allowed to make rulings that negate existing contracts and affect the economy in such a blatant and agenda driven manner. No, I do not expect this ruling to stand. The loss of entry-level low paying jobs in retail and fast food is the obvious long-term prognosis, should the ruling stand. There will be no winners.

I doubt this will stand at least in terms of franchises vs. the parent company. I think there is plenty of labor law that defines who controls and manages that employee and it’s not the parent company. The contract worker is a bit tougher to evaluate whether they are really employees or contractors, but changes to that one don’t seem to be so simple that they will just fly into common practice either.

In a couple of years, all those low level workers will still be making minimum wage, be non-union, and temp agencies will still be strong. All of these proposals for raising minimum wage, joint employer status, etc, will either have no meaningful effect or they will put the businesses that hire the lowest level employees out of business. Any time the government tries to legislate social justice, it sounds nice, but nothing really ever changes.

Braintrust
"I don’t think this could possibly stand as described. The "joint-employer" idea goes one step too far."