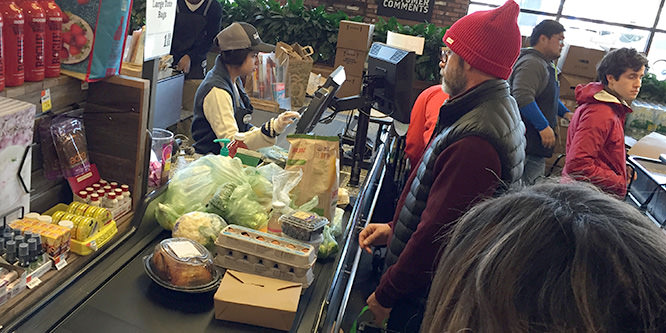 Through a special arrangement, presented here for discussion is a summary of a current article from the Mark Heckman Consulting blog.

In the article, Andrew Wolf, a food retailing sector analyst, recalled a conversation he had with then Kroger CEO, David Dillon, which explains the simple but rare approach behind the supermarket’s success.

“I had a meeting with him 10 years ago or so and he told me they were never going to make a sales or earnings number again by moving the pencil, i.e. raising prices, as long as he was CEO,” said Mr. Wolf. “So I think he had remarkable courage and a strong spine.”

Mr. Dillon demanded that, despite likely short-term hits to their stock price and profitability, Kroger was to keep their eye on the prize: growth.

As a battered veteran of many Monday morning retail meetings, I can tell you that while sales growth is almost always discussed, it is seldom given the prominence of profit and hitting a near term EBITDA number. It would be foolish to infer that profit and margin metrics are not critical numbers to track, but the question should be asked, which number drives the other? My point is that tracking EBITDA as the lead metric often results in tweaking margin rates up with the false notion that there will be little or no impact on same store sales or longer term market share.

While his competitors were mired in P&L calculations, Mr. Dillon understood that his sales-driven approach would produce acceptable, if not pleasing, profitability. That is exactly what happened.

Certainly, other factors play in Kroger’s success. For starters, their store and service improvement programs, coupled with their strategic investment in customer segmentation intelligence, have been key. None of those initiatives however, would be nearly as effective without a cogent pricing strategy with an objective of constant sales growth.

DISCUSSIONS QUESTIONS: Do you agree that retailers, particularly grocers, too often emphasize earnings as a goal metric to the detriment of sales growth? What do you see as the most important determinant of pricing in order to achieve long-term growth objectives?

Please practice The RetailWire Golden Rule when submitting your comments.
Braintrust
"Are sales the most important factor? Not in my book."

I am going to go out on a limb here and remind us of Amazon. The golden child who until recently, and not because of their retail sales, was not profitable.

Retailers scramble to keep up with them by giving away shipping, which likens to giving away the farm for some. Is that smart? Absolutely not! And that buck needs to stop.

So, are sales the most important factor? Not in my book. It can be very damaging.

Interesting topic, as I live this everyday. There is no set answer to this question, as pricing needs to be determined by region and broken down even further by town and economic activity inside the town. In my case, and again this is my scenario, price is KING, and to play games with BOGO or high-low pricing is a recipe for failure, as our customers know the prices of every store’s staples and will buy where they get the best price. Kroger for the most part is not in this situation, as I have been in many of their beautiful stores, all in nice high-income areas. Their market will allow for better margins, and Kroger knows this, and a commitment to keeping prices fair and competitive is exactly what all of us need to do, but in their locations margins are a bit higher, and good for them. Bringing value every single day is important and consumers can buy food absolutely everywhere, especially non-refrigerated staples. So if we are not sharp on pricing, we will… Read more »
2
|
0
-   Share

Many of today’s “price optimization” programs are thinly-veiled strategies to raise prices, particularly on less visible items. Grocers are constantly tempted to raise prices to increase profitability while the simple fact remains that shoppers are very price elastic and will go elsewhere to find lower prices.

A big part of Kroger’s genius over the last fifty quarters is the use of their loyalty program to offer differentiated pricing — different prices for different shoppers. By analyzing its shopper data, Kroger can selectively use discounts to increase sales of its top shoppers but still maintain higher pricing for occasional shoppers. This strategy has driven Kroger’s revenue as 95 percent of its sales growth has come from existing shoppers.

Not being a retailer I cannot comment intelligently on short-term price increases as a tool to influence earnings. I think that is an individual decision based on retailer type, strategy and competitive set. Kroger obviously has a long-term growth strategy that is based as much on efficiency and effectiveness as it is on sales. They have led this segment in the ability to grow without reliance on pricing as the driver. Many other retailers have felt the pain of pricing and assortment fluctuations and the effect they have on earnings and sales growth. Finding an effective pricing strategy based on market and consumer knowledge will vary by situation. The difficult part is finding where you fit as a retailer and developing the strategy and executing the plan that works for you i.e., Wegmans, Aldi and Publix.

Kroger does the right thing and keeps prices in balance and consistent. Their promos are strong and their promotional senior days are a killer. Store volume is amazing on that day — I live it the first Wednesday of each month. Their mix of price, promo and special offers is loved by many of their shoppers.

In addition they have store designs that map to their regions — from the smaller Marketplace store to the posh super store that even has a bar in it — eat and have a beer while someone else in the family shops.

Earnings that aren’t sustainable will only lead to the inevitable decline — so I’m a big fan of sales growth with earnings that follow. That said, lots of times retailers are leaving money on the table too. We’ve done a lot of research that says better private label offerings could charge more.

Most discussions of earnings tend to center on the short term. Earnings is one element of the pricing decision, alongside consumer effects, category effects and competitor reference. When we talk about pricing we need to distinguish among categories and items, as they are not created equal.

Consumer effects can be measured by elasticity by product and basket, among other measures. Category effects consider switching between items as well as complementary purchases. Competitor reference starts with defining who the target competitor is, then what the acceptable gap should be.

Of all of these factors, digital has had the greatest influence on competitors, by introducing new ones and increasing price transparency for all. No retailer can win on all fronts. But certain battles matter more — those involving the most valuable customers and key categories and items.

Both sales and earnings are important. Top line revenues are critical to most organizations and their shareholders. However, they must also deliver bottom line profits. Striking a balance between the two should be the goal of pricing decisions, while also keeping an eye on product positioning.

At the time the decision was made not to adjust price to hit a sales or earnings number, the grocery landscape allowed Kroger to stick to their guns. Let us fast forward five years and what we will see is that ALDI, Lidl and Amazon Fresh along with Dollar Stores have all gained market share and depreciated grocery pricing.

Stores like Kroger and Walmart will have no choice but to try and compete on price as they will be unable to entice consumers to shop otherwise. With over 20,000 stores between them, ALDI and Lidl are on an unstoppable march to become the largest grocery retailers on earth and no one, not even Walmart, will be able to stop them.

In general you can’t achieve sustainable growth without ultimately growing margins AND flow through. What’s interesting about Mark’s article is that Mr. Dillon had a very clear and disciplined pricing strategy. Retailers today, unlike the airlines for example, have very little pricing discipline other than being promotional. That has long been proven as something that reduces profits. As simple as that sounds, retail as an industry has increasingly become a one-dimensional battle, to its own self destruction.

Braintrust
"Are sales the most important factor? Not in my book."