Should Santa be a loyalty program perk? 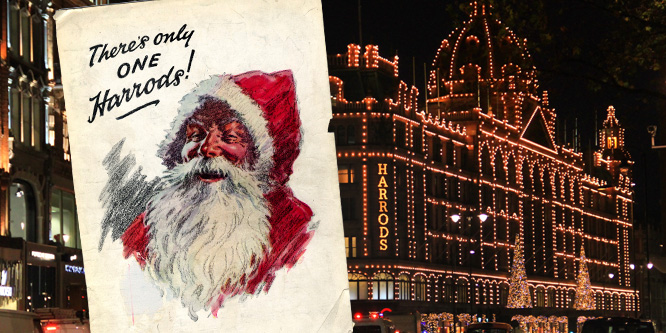 Harrods is facing widespread backlash after reports arrived that visits to its famous Christmas Grotto would be reserved for customers spending more than $2,500 at the department store.

Since the Christmas Grotto opened in 1955, entry had been a first-come, first-serve basis until 2017, when slots were reserved for rewards members, reportedly due to heavy demand. Last year, Harrods shifted to an invitation-only format and for the first time this year, the retailer revealed the spending levels necessary to earn an invite.

In response to backlash, Harrods this year announced a sweepstakes to allow 160 families to visit for free. The Guardian reported that wealthier families would still be given 96 percent of the available time slots.

Social media burned with criticism over the policy that favors big spenders. A 32-year-old mother posted on Facebook, “I’m devastated! Single-parent family so I can’t afford to spend thousands at Harrods so I’m not a ‘loyal customer’. I shop there every so often but it’s such a shame that only the rich or famous will get to go.”

James Browne, 40, told the Guardian, “I think the owners need to have a long hard look at the longer-term impact on their business for the thousands of children who won’t grow up with a fond feeling for the store.”

Harrods said in a statement, “We care hugely about making a visit to the Grotto as magical as possible, and tickets are extremely limited due to the number of slots we can facilitate in-store. Unfortunately, we simply cannot meet the demand for places.”

DISCUSSION QUESTIONS: Is it wise for retailers to offer Santa visits as a perk for valuable rewards members? What advice would you have for Harrods about balancing overcrowding situations at the Christmas Grotto, the complaints from ordinary customers and taking care of its best customers?

Please practice The RetailWire Golden Rule when submitting your comments.
Braintrust
"Harrods should rectify this by hosting a few evenings for less affluent children and making that gesture particularly festive. Without that, this is a huge Scrooge move."

"...to keep a child from visiting Santa because their parents didn’t spend enough money in the store is obscene."

"Right or wrong, good reason or bad, the real screw up here was in how the terms were made public and the fact that they aren’t offering anything for the general public."

22 Comments on "Should Santa be a loyalty program perk?"

Santa as a “perk” just seems like a bad idea. Of course, Harrods has the right to do whatever it feels it needs to do to make the experience great for its customers – including charging to see Santa. However, they had to have anticipated that there would be a public backlash. In retrospect, I suspect that Harrods’ management would like a do-over. Perhaps, in addition to a “premium” Santa experience for paying customers, they could also offer a less costly — perhaps even free — Santa event, like a mini parade around the store.

I get the altruistic reason behind why there might be an outcry. And if this was the only store that had a Santa I would understand. But it is a luxury retailer catering to luxury retail families. So many stores miss perks that are meaningful to their members — instead offering just a coupon or discount. What better way to reward loyalty than to give them experiences their purchases make possible?

Although I’m very torn on this, I am leaning towards Bob’s POV. Brands are trying desperately to strike gold with the “experiences button” and this certainly connects as a great perk for those who qualify. The fact that they are charging money AND are already booked speaks to that.

Of course looking through my sons’ eyes, I would be devastated if we made a trip specifically to see Santa and were told “not for you” … hopefully the volume of media coverage this received served as a warning so families don’t find themselves in that situation.

Harrods faced a dilemma of how to best handle a scarce commodity albeit a somewhat unusual one. It began by using visits to the grotto for the last couple years as a reward for its loyalty members. The real difference is this year it raised (and released) the spending level necessary. Had it simply raised the level and issued invitations the negative publicity might have been avoided.

It is a shortsighted move from Harrods. Retailers in general are missing the opportunity to make these holiday/Christmas moments more magical. With the right vision and investments, they have the unique ability to shape the consumer preferences to drive more footfalls and more in-store shopping.

Harrods has got to see this through the eyes of a child. How do you explain that “we don’t qualify to see Santa here?” Here’s my advice to Harrods: You certainly are a very successful and smart retailer. Now catch the spirit of the season and either open more Christmas Grottos, or have Santa stations located for everyone. It will be a great PR move and the right thing to do.

There must have been a smarter way to have handled this. I would hope that access to Santa would be handled in some kind of level playing field manner. Offer some kind of “premium” package for loyal big spenders? Sure, why not? But Santa himself as a premium feature of the whole holiday experience? That’s just not right. The price shouldn’t be anything more drastic than the willingness to wait in line.

Offering Santa visits as a perk only to big spenders will be seen as a giant lump of coal for many shoppers who feel betrayed. It will likely bring an end to many family traditions that may go back for generations. Unless Harrods makes drastic changes to its policy, and quickly, I suspect we will look back in a few years and point to this as the turning point for Harrods and the beginning of a decline.

“Bah! Humbug! What’s wrong with limiting access to Santa to children of big spenders? Don’t they have Santas in the poor houses? What right do less fortunate children have to be merry?” This is just a bad look all the way around…

This is a huge public relations blunder. Harrods should rectify this by hosting a few evenings for less affluent children and making that gesture particularly festive. Without that, this is a huge Scrooge move.

Cathy, I agree with you. Harrods did not think this through before announcing it. Let’s hope it does not catch on with retailers here. Children look forward to visiting with Santa. We should not deprive them because the parents did not spend enough to qualify.

Harrods’ famous Christmas Grotto is a much loved tradition in London and children look forward to seeing Santa every year. To deny that privilege because of expediency and convenience would be a mistake. It would only serve to send a message of exclusivity to the public. Public relations and giving back to the community is very important for a store like Harrods.

Harrods could offer select dates and times to accommodate their top-tier customers but allowing only those spenders access to the Christmas Grotto would be off-putting.

Many of us remember with nostalgia a trip downtown to view the animated Christmas windows and a visit to Santa. We might not have been “big spenders” but many of us now can afford to shop wherever we want. Harrods is forgetting the basic tenet of retail which is the lifetime value of the customer and creating memories for these children ensures a future for Harrods.

Right or wrong, good reason or bad, the real screw up here was in how the terms were made public and the fact that they aren’t offering anything for the general public. They have every right to make whatever decision they want but that is why we have the word spin. Did they use the right spin? Heavens no! For my 2 cents.

What a Grinch move. There are plenty of times when it makes sense to have invite-only events for rewards members – this is not one of them. Taking Santa away from a child that won’t understand why they can’t go this year is a shortsighted response. Instead, they could have offered early access to rewards members, or dedicated certain nights to rewards members.

I can’t imagine a more effective way to anger consumers and hurt your brand. Santa Claus and the Grotto are assumed values offered to Harrods shoppers. Taking away something as sacrosanct as Santa Claus is incredibly bad marketing.

The issue isn’t merely low income. They are taking the benefits away from ALL shopper children at all income levels — based entirely on spending.

Shame on Harrods. And this move will probably prevent the implementation of far smarter ideas for controlling the crowds — like advance scheduling open to all.

Without being too cynical here, it would seem despite the outcry, Harrods has no trouble selling tickets for all the available slots. By the numbers, someone in finance at Harrods is declaring this a wild success, while someone in PR may be cringing at the social media response! Sure they’re a luxury brand, and this is a luxury perk, but maybe they should have balanced this with something for the masses to keep their brand untarnished.

In a word, “No,” Santa shouldn’t be a perk. As to what Harrods should do, how about hiring more Santas with separate entrances and exits?

While rewarding your best customers with an in-store event can be a great idea, limiting the ability to visit with Santa is definitely not a good way to gain positive press around the important holiday season. Offering a private in-store event for your best customers (which maybe could include a visit with Santa) and then opening up the Grotto visits to more customers through a lottery system may be a better option to appease a broader group of customers.

If you think this is a good idea then get ready to start hitting the thumbs down button. This is a ridiculous, elitist move that is a complete opposite of the meaning of Christmas and what Santa Claus represents. So Harrods is a luxury retailer, big deal. If the retailer wants to host a special event for its loyalty club customers, then go for it. But to keep a child from visiting Santa because their parents didn’t spend enough money in the store is obscene.

I understand Harrods wants to have a premium experience for its premium customers, but Christmas is probably not the time to play Scrooge to public. Shoppers understand they have to buy something to visit the Christmas Grotto, and there maybe a ticketing system for crowd control. They could have easily managed the message better by offering a time segment for premium members ticket allocation and other times for random draws, the under privileged, etc.

Braintrust
"Harrods should rectify this by hosting a few evenings for less affluent children and making that gesture particularly festive. Without that, this is a huge Scrooge move."

"...to keep a child from visiting Santa because their parents didn’t spend enough money in the store is obscene."

"Right or wrong, good reason or bad, the real screw up here was in how the terms were made public and the fact that they aren’t offering anything for the general public."