Should the Monday after the Super Bowl be a national holiday? 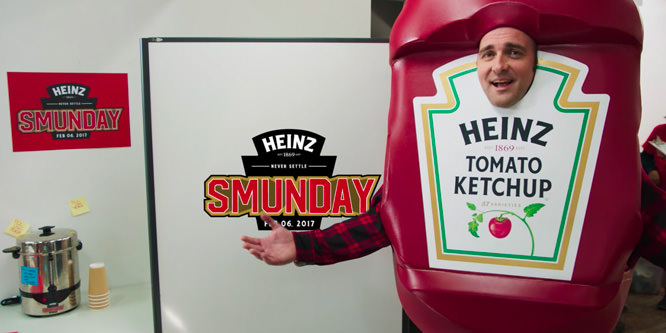 The consumer packaged goods giant, Kraft Heinz, doesn’t expect to get much out of its salaried workers on the Monday following the Super Bowl, so the company has decided to give them the day off. The company is also calling on others to join it in, asking Congress to make “Smunday” — Super Bowl Sunday and the Monday that follows — a national holiday.

According to a Change.org petition started by Heinz Ketchup, some 16 million people do not show up for work on the Monday following the Super Bowl. While not mentioned in the petition, it’s also likely true that too much fun on the day of the big game has many who do show up for work on Monday operating at less than optimum. The petition claims the U.S. has a productivity decline of $1 billion on the day after the Super Bowl.

While some may see Kraft Heinz’s announcements as nothing more than a publicity ploy, particularly since it did not buy any commercials on this year’s broadcast, the company insists it is serious. A commercial running on YouTube, which features actors wearing Heinz Ketchup and Mustard bottles making the case for the holiday, has attracted more than 334,000 views to date.

The petition on Change.org currently has over 46,000 supporters. It needs to reach 100,000 signatures before being sent to Congress.

“If we can make Big Game Sunday awesome, we can make the Monday after awesome too,” reads the petition. “Make that Monday more like Sunday. Make it a Smunday and have more Sunday on your Monday than any of us have ever had in our lives. Don’t settle. Sign it. For your sanity. For your family. For your country.”

DISCUSSION QUESTIONS: Do you think there is a legitimate case for Congress to declare the Monday following the Super Bowl to be a national holiday? What would be the implications for retail businesses if a holiday were declared?

Please practice The RetailWire Golden Rule when submitting your comments.
Braintrust
"Of course it should not be a holiday, although Kraft Heinz is welcome to give their employees a day off, because that would be a nice thing to do."

"A bad publicity stunt conceived when the Pittsburgh (where Heinz is based) Steelers were still in the hunt."

"National legislation is a non-starter, of course, but who cares about that when you can collect 47,000 petitions (and counting)?"

25 Comments on "Should the Monday after the Super Bowl be a national holiday?"

If Kraft were serious about this they’d tweet the idea to our new President, because apparently that’s how our government is going to run now. And while we’re at it, let’s take another try at declaring ketchup a vegetable.

Thank you, Cathy. The film Idiocracy has become eerily close to real life. Perhaps Heinz meant this as a stunt to rally the like-minded, such as the Cards Against Humanity nihilism hole, but the results of such legislation would be devastating. So many women and marginalized peoples have been denied a national holiday. To declare “Smunday” worthy of such reverence would be nothing less than appalling.

Agreed, Cathy and Jasmine. With the chaos going on in the country right now, I think we need to get a little (or a lot) more serious with our change.org petitions. And, the last thing we need is big corporations dumbing us down any further. Meanwhile, many of us will settle down with our beer and chips to watch a bunch of guys bash each others heads in, and try not to think about the long-term consequences. But, a national holiday for the day after the game? PR stunt, or joke, or something like that.

I wouldn’t underestimate the clever intent of Kraft Heinz ploy to engineer a controversy about creating a post-game holiday. National legislation is a non-starter, of course, but who cares about that when you can collect 47,000 petitions (and counting)?

As our tweeter-in-chief has been proving, you can manipulate media response by simply putting an unconventional or odious idea out there for public view. No matter what opinion you espouse, there are probably 50,000 folks who will say they agree with it on social media (and an equal number who oppose). An extra paid day off work is likely to be a popular idea with many more than that.

Hats off to the Kraft Heinz content marketers who came up with this economical stunt. It’s paying off in brand exposures big time.

Absolutely not. Let’s be real: This is a publicity stunt and insisting that it isn’t is nothing more than a way to gain more traction for their plea. This type of mandatory normcore is devastating for individuals with varied interests. Not every citizen in the U.S. watches football games and drinks when doing so. Bob Phibbs used the term “beige-ing” yesterday. This term is as applicable to our culture as it is to the retail industry.

Young artists, actors and musicians are trying to develop in schools that continue to cut funding on the basis that their lifeline is “unnecessary.” Should our society embrace normcore to the point that it’s enforced in the workplace? What are the repercussions for those that don’t fit the mold?

As I’m watching the Super Bowl (Go Patriots!) I’ll be wondering at points if I am either contributing or consuming at that moment. In our information society where we are inspired, harmonize with and in some moments even lead in the world around us, calibrating on these make us more thoughtful consumers while our capacities to contribute are fueled. Our relationship with contributing and consuming perhaps defines the composite of our equality of our life and our value to the world. Smart brands know this … consumers care more about being contributors than most communications plans give them credit for.

If it were a holiday, how would I gloat to my Falcons-supporting co-workers when the Patriots win? Of course it should not be a holiday, although Kraft Heinz is welcome to give their employees a day off, because that would be a nice thing to do.

It’s a nice gimmick, but that’s all it is.

I’m not sure if “legitimate” would be the right word. But I can definitely see this petition gaining popularity. It’s no surprise that millions of people don’t show up for work the day after the Super Bowl. Taking the Super Bowl seriously is one thing the majority of our country seems to agree on. In a recent survey more than 51 percent of Americans said they would give up vacation days for a year for their team to win the Super Bowl. Personally, I don’t think it would be a horrible idea to declare that Monday a national holiday. Employees aren’t being productive in the office, so the retail and service industries might as well profit.

In this day and age, with people having flexible days, I don’t see a need for “Smunday.” The comment however concerning productivity is very interesting. Does that apply to the final Monday of March Madness? A late night World Series game? Maybe companies should start a petition to the NFL, NCAA, MLB etc. to play these games at a reasonable time on a weekend. Holidays should be reserved for all of us, not just the 20 percent of the population that party at or over sporting events. This comment is from a die-hard sports fan who stays up for all of these events!

We have enough mandated holidays, and this is a sorry excuse for binge drinking on Sunday. I’ll be at work as usual, and if a company wants to do it on their own good for them.

Crazy … I am sure that in Heaven every day is payday and every hour is lunch hour, and I am also sure that every social media site, phone company and product provider would want to name any number of specific dates as their day. But as the Grinch might say, “maybe work days don’t depend on weekends — maybe work days perhaps mean a little bit more.”

If’s a fun way for Kraft Heinz to garner publicity (instead of shelling out $5 million for a 30-second spot), but that’s all. The vote seems to be unanimous so far — we don’t need another Federal holiday, especially for this — and I agree.

I wonder if ANYONE out there would think this is a serious thought?

This was never about trying to declare a real holiday. Heinz just showed that you don’t have to spend the big money to advertise on a Super Bowl commercial. They got exactly what they wanted, everyone to share their video. They even got you guys to write an article on it and I’m sure there will be a ton more coming out and they will go viral. So they get millions of YouTube hits for spending next to nothing. Way to save money.

Many years ago, I worked at a company where the CEO threw an annual Super Bowl bash for corporate HQ employees at his house. Those not seen as thoroughly enjoying themselves (non-drinkers like me) were viewed with some suspicion by said CEO. There was a delayed opening on the Monday following the Super Bowl with no one expected to show up before 11:00 a.m. I had no problem arriving at my usual time, but many others were in little shape to work even with the late start.

Stupid. A stunt to get their name in the headlines without paying millions a minute for a spot on the Super Bowl advertising line-up.

C’mon! I love my sports and expect it to be a really competitive Super Bowl, but Smunday? We have too much focus in the U.S. on sports. Let’s turn our attention to innovation, quality as job one, protecting the rights of citizens and being hospitable to visitors. Let’s have the day after the Nobel Prize is awarded as a global holiday!

A bad publicity stunt conceived when the Pittsburgh (where Heinz is based) Steelers were still in the hunt. Cognitive bias at its best.

The country seems to be falling apart and we’re discussing this? I’m not sure whether to smile at the attempt at levity or get even more despondent.

Nothing more than a gimmick. But it made us watch the boring video, didn’t it?

Nope. Nice publicity for Heinz though.

The initiative does put a spotlight on the ease of getting people (or perhaps some bots) to sign online petitions — and the low value of this type of initiative. This petition now stands at 49,000.

Pure gimmick, and — what a windfall. We are ALL talking about this. Whoever thought this up should get a bonus because the company did not have to shell out for a commercial yet still got a lot of attention!

Braintrust
"Of course it should not be a holiday, although Kraft Heinz is welcome to give their employees a day off, because that would be a nice thing to do."

"A bad publicity stunt conceived when the Pittsburgh (where Heinz is based) Steelers were still in the hunt."

"National legislation is a non-starter, of course, but who cares about that when you can collect 47,000 petitions (and counting)?"