Staples chooses to be different, closes stores on Thanksgiving 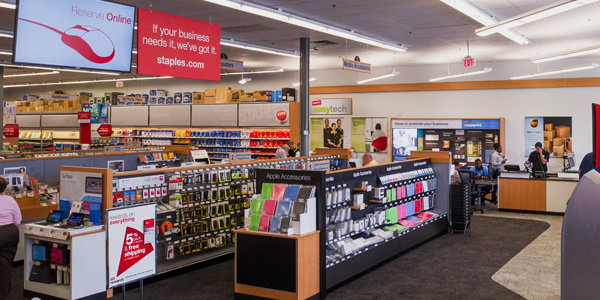 Announcements by chain retailers that they will be open on Thanksgiving Day is no longer big news. If anything, it has become expected that at some point during the day, most large chains will open their store doors for consumers who simply can’t wait until midnight or some other ridiculously early hour on Black Friday to start shopping for Christmas. That’s what makes Staples announcement that it plans to keep its stores closed on Thanksgiving newsworthy.

The decision by Staples to close its doors is in contrast to the past two Thanksgiving Days when it opened for business. Perhaps the decision to close this year is an indication of what many critics of early openings have said for years — that staying open increases costs and degrades morale for associates at a time of year when they need to be at the top of their games.

"We want our customers and associates to enjoy Thanksgiving their own way," said Demos Parneros, president, North American stores and online, Staples, in a statement. "On Thanksgiving Day, customers can shop from home on Staples.com and then continue their shopping in stores starting at 6 a.m. on Black Friday. Whether our customers like the convenience of shopping online, in our stores or a combination of both, Staples will have amazing products at great prices throughout the holiday season."

Along with many others, Staples is not waiting until the traditional Black Friday weekend to start touting its "amazing deals" for the holiday selling season. The chain said it would begin offering special holiday savings beginning in early November.

Do you expect other retail chains to follow Staples course reversal and keep stores closed on Thanksgiving Day? In the end, does being opened on Thanksgiving result in additional sales and profits for retailers over the course of November and December?

Please practice The RetailWire Golden Rule when submitting your comments.
Braintrust
"Good for Staples. I believe Thanksgiving Day openings result in equal sales and less profits for the retailers who participate. I hope this is a trend. Our society could really use some softening."

"I thought that ShopperTrak was able to measure that over the last two years the only thing opening earlier has done is capture the same amount of sales over a longer period of time — which costs the retailer more."

"Glad they had the guts. I was shocked when retailers were actually surprised that the whole weekend was flat. The pie’s only so big! You’re not going to make the pie bigger by taking traditional family time and making it retail time."

19 Comments on "Staples chooses to be different, closes stores on Thanksgiving"

Opening on Thanksgiving might not be worth it. Especially Staples. I rarely have a need for office supplies due to technology. Even more so on Thanksgiving. Specialty stores like Staples are more of an afterthought anyway. People serious about Thanksgiving shopping will be shopping the big box stores. If your stores have bargains, offer them online and use the labor savings for cheap delivery.

No. Good decision by Staples, especially if it will contribute to employee morale. Staples is probably not a destination for Thanksgiving shoppers anyway. Not certain about the profitability of Thanksgiving. However, retailers whose main competitors are open on Thanksgiving have little choice.

I hope that other retailers will follow Staples and not open on Thanksgiving. As we saw last year, planning a full promotional calendar for November took some of the emphasis off Black Friday and still delivered positive sales results. C’mon retailers, give your employees and consumers time with their families by staying closed on Thanksgiving.

No — I expect the craziness of opening earlier and earlier to continue with more and more retailers joining the fray.

We have had Thanksgiving dinner at a friend’s house for several years. Between their home and ours is a large (and growing larger) discount shopping center. At 9 or 10 p.m. on Thanksgiving people are lined up on the interstate trying to exit to the mall. As long as people are willing to engage in this kind of behavior retailers will continue to open on Thanksgiving.

I am not sure that it adds to the total sales for the period, but the fear of losing a sale to another retailer will keep most stores from closing on Thanksgiving.

Good for Staples. I think the retailer can accomplish as much online with less cost.

I believe Thanksgiving Day openings result in equal sales and less profits for the retailers who participate. I hope this is a trend. Our society could really use some softening.

Good move by Staples. I agree with the earlier comments that the net profitability of Thanksgiving Day operations are likely small — particularly when you look at overall impact on the customer base, not just the short-term blip. I doubt that being closed on Thanksgiving has any significant impact on their most valuable customers — it only helps the bargain hunters who aren’t worth focusing on anyway.

The cynic in me says that this is has more to do with poor Thanksgiving revenue than employee morale. Not knowing their sales volume, my guess is that Staples is not at the top of consumer’s lists for shopping that day and the deals they have to make to lure Thursday shoppers, coupled with the expense of operations, isn’t worth opening physical stores. Of course, Parneros did put the right spin on the announcement.

Staples’ decision bucks the current trend and I don’t expect a reversal of that trend to happen anytime soon despite this move by Staples.

Many of the retailers that choose to open on Thanksgiving are hoping to get foot traffic spillover from the crowds lining up for high-demand, low-priced and exclusive products in nearby big box locations. Just like people going through the “FOMO” (fear of missing out) syndrome, many retailers are catching their version of that syndrome.

Today’s consumers do more of their shopping online, especially around the holidays. The traditional thinking of adding one more shopping day to the calendar is less likely to deliver much improved chain-wide comp store sales, let alone margins.

Thank you, Staples, for standing up for the family. Let’s hope that others follow your example.

My wish is that the fight for the almighty dollar can be put on hold until early Friday, giving the employees who have to work or lose their jobs time with their family. What more do we need to say to make this happen?

I thought that ShopperTrak was able to measure that over the last two years the only thing opening earlier has done is capture the same amount of sales over a longer period of time — which costs the retailer more. I hope more retailers do the cost/benefit analysis on whether it’s worth being open on Thanksgiving Day, because I suspect the answer will be no. That said, there are plenty of retailers out there who will not do that analysis and continue to live in the old single-channel world where they expect consumers to come to their store first and blow their holiday shopping budget on add-on sales driven by the doorbuster bargains. I’m pretty sure this model of retail is dead. Black Friday sales are won and lost online. If you have a deal that a consumer wants, they’ll figure it out beforehand and go to your store whenever you plan on opening. But don’t be surprised if they cherry pick that deal and drive on to the next store to get that next must-have… Read more »
0
|
0
-   Share

Hope so. No one would open at crazy hours if the competition didn’t doubt the total volume of shopping would go down either, if it’s a level playing field.

By consciously using a time honored retail strategy of differentiating themselves (being closed on Thanksgiving instead of running with the rampaging herd) Staples will win with both customers and employees and perhaps even at the bottom line. I think the pendulum may be starting to swing back a little toward “real” Black Friday, and I hope it continues.

With the addition of e-commerce as a sales venue there is little or no reason to take employees away from traditional celebrations. This is especially true for Staples where buying or looking for online is so much easier than the 20th century frantic search for product and/or repairs.

There are many ways to encourage e-commerce buying and/or “wait for our store sales” that will stave off the anticipated awful lost revenue reports. There should be no more doubt that the little things like one or two weekends off a month along with important holidays like the Fourth of July, Thanksgiving, New Years Day and maybe one or two electives will make valued retail employees think long and hard before jumping ship. The future is the result of what we are doing for better or worse right now.

No doubt a bit of analysis of prior years’ sales showed them that a Thanksgiving opening did them little good. They’re just not in a category that can compete for traffic on this holiday. And, no, I don’t think many of the holiday-destination stores will follow the lead of Staples.

Glad they had the guts. I was shocked when retailers were actually surprised that the whole weekend was flat. The pie’s only so big! You’re not going to make the pie bigger by taking traditional family time and making it retail time. Customers will just NOT shop on Friday.

Smart move Staples. Your staff that has gone through so many changes will appreciate it, and as others have pointed out, so will your bottom line.

Sadly I don’t believe this will be the norm.

I don’t expect many to follow suit and while the sentiment is honorable, it’s easier to understand staples decision than if, say, Target or Walmart did so. It comes down to the type of store; business supplies as a hot Thanksgiving shop? Not as powerful. The other factor to be considered here is the role of online—customers will still be able to get great deals from Staples. So net net a nice thing, but also probably not a huge commercial sacrifice.

Great move for Staples. First, they gain good press for being one of few retailers that gives their employees a chance to digest their Thanksgiving dinner before coming into work. It’s so interesting to see the evolution of holiday shopping and how a 6 am open time has become benevolent. But of course Staples is being compared to big box retailers that are open when some families still have their turkeys in the oven.

The Staples website will need to be stronger than ever because shoppers that would have gone to a store will only be able to shop online. Then again, I’m not sure what in-store traffic was the past two years. Being open on Thanksgiving isn’t for all retailers. Giving employees a day to rest and be with family is worthwhile, especially if sales have been lackluster. It’s just one day and since they’re starting deals early, I don’t think Staples will be losing much.

Braintrust
"Good for Staples. I believe Thanksgiving Day openings result in equal sales and less profits for the retailers who participate. I hope this is a trend. Our society could really use some softening."

"I thought that ShopperTrak was able to measure that over the last two years the only thing opening earlier has done is capture the same amount of sales over a longer period of time — which costs the retailer more."

"Glad they had the guts. I was shocked when retailers were actually surprised that the whole weekend was flat. The pie’s only so big! You’re not going to make the pie bigger by taking traditional family time and making it retail time."