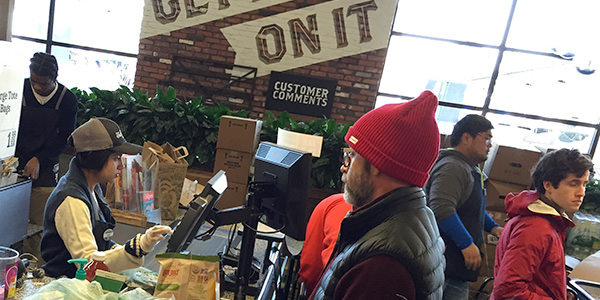 At least in Ontario, frontline male workers are paid more than women in every occupational category at retail, according to a new study from Brock University.

Kendra Coulter, associate professor in Brock’s Centre for Labour Studies and the report’s lead author, along with Angella MacEwen, an economist at the Canadian Labour Congress, and Sheetal Rawal, a lawyer with expertise in pay equity issues, gathered statistical, policy, survey, and legal data in contributing to the study.

Among the key findings of the report:

Included was a anonymous survey of nearly 400 retail workers conducted between February and March 2016 that explored pay, hiring, work distribution and hours, promotions and working conditions. Seventy-two percent of survey respondents were women.

Some of the findings:

The researchers said a wide variety of answers showed how different management approaches, workplace cultures and individual actions can affect how stores operate and the working conditions therein. But much like the louder discussions concerning diversity in the corporate workplace, the researchers said the survey showed “particular kinds of characteristics and expectations considered to be more or less ‘feminine’ or ‘masculine’ shape people of all kinds,” influencing opportunities for both genders.

DISCUSSION QUESTIONS: Do you suspect pay levels among male and female sales associates in the U.S. are similar or different to the Ontario study? Are there reasons beyond overt or covert biases to explain why male retail workers are paid better and are promoted more frequently than their female counterparts?

Please practice The RetailWire Golden Rule when submitting your comments.
Braintrust
"I don’t know a single woman who hasn’t experienced gender discrimination. The story won’t come as a surprise to us."

"I don’t know a single woman who hasn’t experienced gender discrimination. The story won’t come as a surprise to us."

"To my chagrin, I suspect the situation in the U.S. is closer to Ontario’s case than we care to admit."

Not sure about Canada. Here in the States, the pay is not that big of an issue — especially in fashion areas. Women would and should be paid more in areas where they have more expertise. One area is women’s focused areas. If the core shopper is women, then more pay to the women.

Now with DIY floor sales, women and men should be paid on expertise level. There are lots of women that know way more than men about DIY. So that role should start out at same pay and each 6 months adjust the pay based on expertise. We need more people with experience in DIY!

Wow, hard to believe those findings. Maybe I just don’t want to accept them. I’d like to think in the U.S., the vast majority of retail offers equal pay and treatment of all employees.

My experience has been that it does. Experience pays more, regardless of gender.

I don’t know a single woman who hasn’t experienced gender discrimination. The story won’t come as a surprise to us. This hurts the industry, by the way.

To my chagrin, I suspect the situation in the U.S. is closer to Ontario’s case than we care to admit.

As to the core question at hand, there are no legitimate reasons to explain the variance in pay and promotion. The mere attempt to find those indicates an implicit validation of this moribund pay and promotion system that remains mired in the mid-20th Century mentality.

The answer to the first question is easy: Why would we expect it to be much different (we’re not comparing to Tibet, or something)?

Studies like this are always a minefield, since they’re useless unless carefully controlled for the various influencing factors, and we seldom have much info about how they were compiled.

While I can’t say that I’ve noticed more men on the floor across most of the retail stores I frequent, I’ll be an optimist and hope that any disparity in hours and pay is due to the job done rather than the gender.

I grew up working retail (no shock!) and still know some women that have made a wonderful career for themselves moving up the ranks. What they all have in common is a great attitude, a natural “way” with people/shoppers and a fantastic work ethic. They would also never play the sexism card b/c they know their value.

Does the difference between “frontline male workers” and “women in every occupational category” INCLUDE “frontline female workers and executives”? There must be comparable studies on this for the U.S. I thought we were past this. Is it because of Canadians’ politeness, i.e., the little woman being treated differently — as in, less than male counterparts?

Of course men make more than women. Men normally will simply work more hours and therefore earn more money, regardless of position. “Fifty-nine percent of male salespeople are employed full-time compared to 38 percent of female salespeople.” Right there should answer the question. I would guess that the 41 percent of the men who are working part time are probably earning similar wages to the women.

As for management positions, men usually have spent more time on the job, not taking time off for family issues, therefore attaining more seniority. I never take these surveys too seriously. “Seventy-two percent of survey respondents were women.”

As we all know, people who work for other people are usually complainers. Underachievers of both genders often are looking to blame someone else for their shortcomings. The only true test of income fairness (realistic worth) is self-employment.

The first answer is no. Most retail chains have HR departments whose job it is to protect women. And, in my experience, many/maybe most HR departments are run by women.

The second answer is obvious — and already covered by my colleagues.

At the same time, we’re all guilty of cognitive biases. So it’s natural to believe a bias when it pertains to you, even when it’s not a bias.

To be clear, there should be zero tolerance for any biases.

In the US, pay rates among the genders are probably similar. The primary reason men are often paid better is just the fact they work longer hours, therefore earning more money. I don’t think male workers receive preferential treatment. In fact, just the opposite. It is more acceptable for women to work less hours, travel less, and take more personal time off for family issues. We get too hung up on pay rates among genders. You have to look at the bigger picture that includes lifestyle accommodations. It all evens out.

Braintrust
"I don’t know a single woman who hasn’t experienced gender discrimination. The story won’t come as a surprise to us."

"I don’t know a single woman who hasn’t experienced gender discrimination. The story won’t come as a surprise to us."

"To my chagrin, I suspect the situation in the U.S. is closer to Ontario’s case than we care to admit."