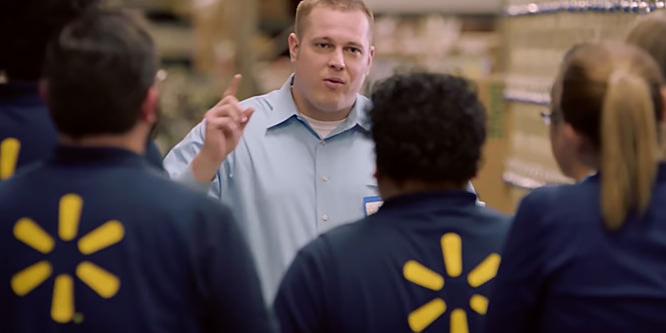 Walmart is eliminating approximately 7,000 accounting and invoicing positions inside its U.S. stores. The move is seen as either a shift to place more employees in customer-facing roles, a money-saving move, or a bit of both.

The Wall Street Journal first reported on the job realignments on Thursday. The decision follows a test earlier this summer. Walmart has about 1.4 million U.S workers.

The in-store jobs being eliminated involve tasks such as managing an individual store’s daily cash flow and processing claims from manufacturers delivering goods directly to stores. Those tasks will be handled at the corporate office or through automation.

A Walmart spokesman told Reuters the job eliminations are designed to bring more associates to the sales floor. Affected employees will be offered jobs in other parts of the store, although their pay may increase or decrease depending on the job.

The move comes as Walmart has committed to investing $2.7 billion in training and raising wages to improve customer service. The retailer increased starting pay to $9.00 last year and $10 earlier this year. At its June annual shareholder meeting, officials raved about how customer satisfaction scores had increased 79 straight weeks. Walmart just reported its eighth quarter in a row of U.S. same-store sales gains.

Bodies at the store level are also needed to support curbside pickup, ship-from-store, ship-to-store and other omnichannel initiatives.

On the other hand, the in-store back-office positions are some of the highest paid hourly workers at the store level and the discount giant may be looking for ways to offset the rising costs for training, higher pay and new hires and other investments. Walmart is investing heavily digital to better compete with Amazon, including rolling out the Walmart Pay app and acquiring Jet.com for $3.3 billion.

Joel Bines, co-head of AlixPartners LLP’s retail practice, told the Journal, “Any time one expense line goes up, you are likely to see a reduction in a corresponding expense line.”

Discussion questions: How confident are you that Walmart can eliminate many of its in-store administrative jobs without repercussions? What do you think motivated the move?

Please practice The RetailWire Golden Rule when submitting your comments.
Braintrust
"If those back-office jobs can be displaced by technology, or by combining functions for several stores, then it’s a justifiable move by Walmart. "

"This wasn’t the smartest move."

They obviously have what they feel is a good business case for doing this. However, there is an additional danger area that is often forgotten. As a supplier to large retailers, we are finding first-hand more and more that the internal accounts payable processes are becoming a nightmare to deal with. This will only get worse with these cuts. Suppliers are key stakeholders too and how they are treated affects the brand of the company. It hits social media and creates a negative impression externally about the employer brand and the overall desired corporate message. Any company needs to understand that how it treats its suppliers is a reflection on who they are and how they do business.

I’ve already received emails from Walmart activist groups. The drumbeat will continue, but I’m not sure Walmart can be disliked more than it already is, honestly (sorry Tom Redd, that’s just the truth of it).

What motivated the move? Maybe they created some new accounting procedures that made the positions redundant. They definitely needed to allocate more workers onto the floor, that’s for sure.

Overall, I know Walmart has tried very hard to be more accessible and “friendly.” This wasn’t the smartest move. They would have been better off simply reallocating the workers, much like Hubert Joly re-allocated at-the-door security personnel to customer-facing positions at Best Buy.

While we don’t know the exact reasoning behind the change, Walmart certainly could have done a better job with the optics given there seems to be as much anti-Walmart sentiment as there are political PACS.

If those back-office jobs can be displaced by technology, or by combining functions for several stores, then it’s a justifiable move by Walmart. And if at least some of the cost savings can be applied to front-of-the-store payroll (checkout lanes and restocking teams) then it is a smart move too.

Last question first. Looks like a cost saving move to me. Presumably some of those back-office folk won’t be too excited about being offered lower-paid store floor positions and will move on to other employers. Now as to the first question, I guess it all depends on what you mean by repercussions. Can you displace a large group of workers without blowback? Not too easily unless you do it through attrition. What form will the repercussion take? Probably increased shrink, maybe an isolated protest or two and possibly some negative press coverage. My bet; life will go on once the dust settles.

Walmart’s exploiting of digital to improve the productivity of places, processes and people makes them strong. To not use enabling technologies is to give competitive advantage to others, which is not in the Walmart playbook. Its trial or application of any technology that reduces costs and increases returns means that occasional re-alignments of staffing needs in the face of technologies implemented are needed. It is the natural cycle of technology-based productivity improvement.

The announcement signals to its customers that they are working to deliver on their value proposition. That is good PR.

Walmart is continuing to upgrade their automation services, and more job cuts in these higher paid positions will continue. No one in business large or small wants to pay for more help than they need, and today’s smart deal-buying consumers are driving all of us to find cost savings just to stay profitable. With a touch of a button consumers can sit back and have everything appear at their door in some cases in under an hour. The good old days are gone. Either streamline your business to fit your customers’ needs and get involved with producing a workable social media platform or risk being out of business.

I understand what my customers want, which is great deals and custom prepared foods. Unless I can make this happen very efficiently, without waste, I will struggle to keep their business. Walmart knows how to keep costs down better than anybody and, as big as they are, they will not waste a dime if it gets the desired results they need for their shareholders.

Let’s see. As of July 31, Walmart had 5,283 stores in the U.S. So we’re talking about roughly 1.25 employees per store being reassigned or cut. Considering all the circumstances as explained, the move makes sense to me. I suspect that tomorrow morning, the sun will still rise in the East.

It is about time we get used to automation changing our workforce. Sometimes those pushing back (repercussions) are saying don’t take advantage of the ever-changing and improving technology. This is like pushing back on Henry Ford because he developed the assembly line.

The profile of our workforce will change and continue to change. It is inevitable that jobs will be eliminated. Focus on re-learning and re-training, not on keeping positions that can be replaced with more efficient and competent tools.

On a related note, this skill could save your job — and your company.

This is a no brainer and a great move for Walmart, and something that every executive in every business needs to be thinking about. They should ask themselves the following questions about every job:

And if we’ve learned anything from the airlines, maybe ask how can we get the customers to do the job for themselves?

There’s really no way to eliminate this many jobs of this type without repercussions. But that doesn’t mean it’s a wrong move.

What strikes me is that these are jobs of the bureaucracy. And there are times when the bureaucracy needs to be brought into check — because bureaucracies evolve without regard to the bottom line. It may be (and I have no first hand knowledge at Walmart) that the overhead level for processing has grown far too high.

In fact, I’m disappointed that modern writing rarely uses the term “bureaucracy.” It’s a useful term because (a) we can’t live without them, (b) eventually bureaucracies make their own survival their top priority, and (c) bureaucracies tend only to expand and never voluntarily shrink.

That’s all pretty theoretical. But my guess is that a part of Walmart’s needed change through this move is wrapped up in the downside of bureaucracy.

IF they mean what they are saying about putting more associates on the sales floor, then this is going to be good, especially for the customer. Backroom associates do not add to the bottom line. Storefront associates can assist the customer in filling the shopping cart. That is the only thing that makes the registers ring.

Braintrust
"If those back-office jobs can be displaced by technology, or by combining functions for several stores, then it’s a justifiable move by Walmart. "

"This wasn’t the smartest move."