What are retailers and suppliers to do when caught between Amazon and Walmart? 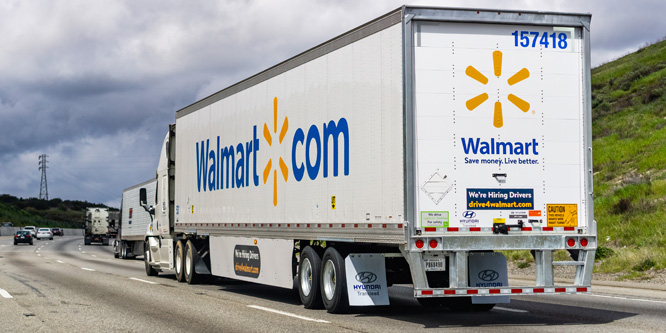 What goes around comes around, they say.

For decades, chain supermarkets and independent grocers have objected to what they have perceived as a playing field tilted to the benefit of Walmart. Walmart and consumer packaged goods suppliers, it was alleged, worked out deals that smaller rivals were not able to access. Some independents would shop their local Walmart to buy items at prices lower than they could get from their suppliers. The Robinson-Patman Act was, many said, a joke.

With this as a backdrop, it has been interesting in recent years to see reports of Walmart exerting pressure on suppliers as it begins to see itself being undercut on price by Amazon.com. Reuters reported yesterday that a small number of suppliers in Mexico have stopped doing business with Amazon over concerns it could cost them Walmart’s business.

On CNBC’s “Squawk on the Street” show, host Jim Cramer recently said that his sources believe Walmart management isn’t paranoid; Amazon is out to get their business.

“They hate, hate, hate Walmart. Walmart is the biggest grocery chain in the country,” Mr. Cramer said. “Amazon will stop at nothing to take away the share that Walmart has gained.”

In the U.S., reports in recent years have shown Walmart and other large retailers have pushed trucking company vendors and technology providers to ditch Amazon. The issue of tech vendors using AWS has been a particularly thorny issue as many retailers see Amazon’s hugely profitable cloud business underwriting the price cuts on its retail marketplace.

DISCUSSION QUESTIONS: Do retailer complaints about rivals getting better deals from suppliers point to an anti-competitive current in the industry today? What is the solution for retailers and vendors if such a situation exists?

Please practice The RetailWire Golden Rule when submitting your comments.
Braintrust
"Despite concerns from Amazon’s competitors, this dynamic is rarely a function of suppliers providing Amazon lower wholesale costs. "

"It would be great if we could actually enforce the Robinson-Patman Act. Suppliers don’t just violate its “spirit,” they violate it, period."

15 Comments on "What are retailers and suppliers to do when caught between Amazon and Walmart?"

Despite concerns from Amazon’s competitors, this dynamic is rarely a function of suppliers providing Amazon lower wholesale costs.

It’s sometimes a function of weak links in the supply chain being exposed by Amazon’s third-party marketplace, as when limited supply from a closeout or liquidation channel is opportunistically snapped up and listed on Amazon.

Suppliers should have visibility into the scope and magnitude of this dynamic for their own portfolio, strengthen supply chains with well-enforced authorized distribution policies, improve unit economics with more efficient product forms, packaging, and logistics;, and support for non-price mechanisms for delivering value to shoppers.

Retailers need to adapt or perish. Working with your suppliers, including your logistics providers (suppliers) is part of this equation. So is competing on a platform that includes a mobile/online communication solution that is competitive, easy to use and priced accordingly. Working with your category competitors (read co-op) to leverage better purchasing strengths, faster delivery schedules and more competitive positioning is not illegal, just smart. One of the key solutions here is teamwork for all retailers, suppliers and providers.

Walmart getting better deals isn’t anti-competitive, it’s just common-sense economics. It is a huge player that buys in much higher volumes, so it has more power to negotiate better terms. That’s the same principle that allows consumers who shop in bulk at Costco to secure better prices.

Other supermarkets may complain, but many of the larger national chains would be better served putting their time and energy into being as good a retailer as Walmart. Their own shopkeeping standards, store environments, and general operational efficiency leave a lot to be desired. Improving those things is the real way to compete – not just against Walmart but against the rise of other low-price chains like Aldi and Lidl.

That’s all well and good, but there really is a law against that. For real.

I don’t think that is strictly true. The Robinson–Patman Act allows for volume discounts to be given on the basis that it is more efficient for a supplier to deal with a large retailer than a small one.

P.S. Two things: there is a reason Costco’s packaging is different (like packaging two of something together). They actually do NOT violate the Robinson-Patman act because technically, it’s a different SKU. This is also a way bigger problem than just food. It’s a problem for everything Walmart sells.

Also note that Costco produces a lot of own-label products, which are not covered by the act. As private label, and consumers’ acceptance of it, has grown it has naturally allowed the law to be “circumvented.”

Yeah, I was talking about the branded stuff. And this is a good description of the act: The law grew out of practices in which chain stores were allowed to purchase goods at lower prices than other retailers. An amendment to the Clayton Antitrust Act, it prevented unfair price discrimination for the first time, by requiring that the seller offer the same price terms to customers at a given level of trade. The Act provided for criminal penalties, but contained a specific exemption for “cooperative associations.”

That means that anyone who can afford to buy a truckload of merchandise should pay the same price as anyone else buying a full truckload. I actually spent a fair amount of time on this topic back in the mid-aughts. For real … it’s just not enforced, but the law is pretty clear.

It would be great if we could actually enforce the Robinson-Patman Act. Suppliers don’t just violate its “spirit,” they violate it, period. I don’t think you’d find a single person who would say it is remotely enforced.

And there was a time (not sure if it’s still true) when Walmart was the largest supplier of grey market goods in the country. In other words, they’d buy the truckload at one price, and then re-sell it at the higher price to other retailers or jobbers.

All this points to real anti-competitive problems. Just know they are not new. It has been an issue since Walmart achieved stunning mass in the early 2000s.

Rivals do and will continue to get/demand differing deals as a result of their strength in the market. Walmart is a power house; just ask any vendor who must sit through line reviews with Walmart. Competitive environments are not flat fields. Every retailer has to define the hooks they possess to draw and please customers. There is no room for retailers to “hope for the best” – it’s about taking action to be a standout. Pleading foul in the marketplace doesn’t mean anything to anyone. Like the quote from the movie The Godfather: “It’s just business.” That’s just the way it is.

I have followed this trail for more decades than I can remember. Independent retailers used to complain that chain stores got a better deal than they did. They were right since Robinson-Patman only asks that deals be extended without bias, not that everyone is entitled to the same deal. Then, as George notes, chains complained Walmart was getting a better deal, using essentially the same argument the independents has used against them. No surprise then that Walmart is now complaining about Amazon. And so it goes. The “anti-competitive” climate is no better or worse than it has been for years. Robinson-Patman enforcement in the food industry has been iffy, at best. The current Administration seems to believe no regulation is the best regulation, so it doesn’t look to me like things will change much before 2020, or maybe 2024, at the earliest. But the question overlooks a critical fact. Sam Walton started out as a guy running a couple of Ben Franklin stores in a “C” or “D” market. His assets were virtually non-existent. The… Read more »
3
|
0
-   Share

Interestingly, the AWS profits aren’t underwriting price cuts — they’re underwriting Amazons entire retail-style business which is losing money. Amazon’s profits seem to come from AWS, content, and their own products. And investors are paying for this with inexpensive money.

Vendors ARE making money on Amazon. But if, as I suggest, Amazon is selling all those goods at a net loss, then Amazon is attempting to buy away business from Walmart — concerns on Walmart’s part seem valid. So Amazon is buying investor loyalty. Huh.

It remains striking to me that there is not yet pressure on Amazon to report valid data so that we can actually see what’s going on. In all my digging into Amazon numbers, we have yet to see content and Amazon devices separated from their vendor supplied online market sales. That is the most critical number to know about Amazon’s business.

This is simple. Buy more and get a better price. Walmart’s size gives them buying power. That’s why there are buying groups. Retailers get together as a co-op to increase their buying power. Do a better job of managing logistics and cutting down waste. For the purchasing power issue, Ace Hardware has managed this issue in the home improvement world. They go up against the big-box stores with more selection, lower prices, bigger ad spends and stronger buying power. It doesn’t matter if it’s hardware or groceries, the Ace model works.

The national chains like Walmart have difficultly placing orders with small and medium sized suppliers. With the trend in food and adult beverages towards local, why not buy locally as much as possible and have a different offering? And thus have no price issues….

What seems to be missing from this conversation is central to retailers improving their COGs negotiation leverage — DATA. Without tangible “proof of performance” (e.g. shelf price, promotion, display, customer insights) traditional retail grocers have little leverage, and frankly, have no leg to stand on in regard to demanding better COGs. Walmart understood (and proved) this years ago, creating Retail Link to enable CPGs access to item, store, day sales in <15 minute increments. By doing so, they provided “value add” to their suppliers, and ultimately were able to push retail execution and fulfillment responsibilities down to their supplier partners — thus creating a competitive advantage via supply chain excellence still unmatched today. Recently, Amazon, Boxed and other disrupters are offering this “proof of performance” data and something of even more/equal value — customer insight data to their CPG partners. The Robinson Patman Act is outdated and simply addresses landed COGs based upon volume; easy enough to work around this static “list price” with layered promotions, pricing schemes or other value added services. Bottom Line:… Read more »
1
|
0
-   Share

Braintrust
"Despite concerns from Amazon’s competitors, this dynamic is rarely a function of suppliers providing Amazon lower wholesale costs. "

"It would be great if we could actually enforce the Robinson-Patman Act. Suppliers don’t just violate its “spirit,” they violate it, period."