What does a record Cyber Monday foretell for the remaining holiday season? 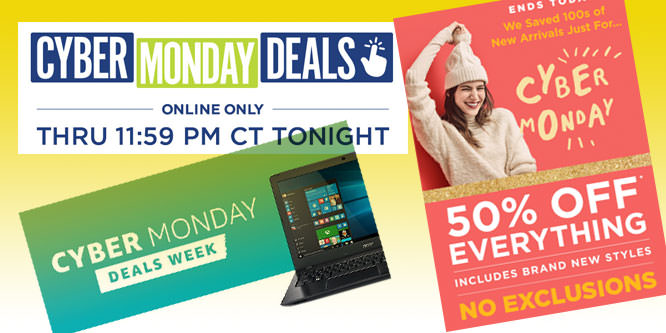 Before the Cyber Monday kicked off yesterday, the National Retail Federation said it expected the number of people shopping online this year to reach 122 million, an increase of one million over last year.

In a press release issued last night, Adobe reported that Cyber Monday was on pace to set a one-day online record with $3.39 billion in sales, a 10.2 percent increase over 2015.

The apparent success of Cyber Monday is significant since the day has generally been viewed as less important in the overall scheme of the holidays since retailers now often kick off online sales promotions days if not weeks in advance.

According to Slice Intelligence, “Cyber Week” 2015 — defined as Tuesday, Nov. 24 to Monday, Nov. 30 — accounted for roughly one-third of all online revenues for the holiday season. Sales during that week were three times larger than the average week for all of 2015.

Metro markets across the U.S. known as being early e-commerce adopters — such as San Francisco (up seven percent); Washington, DC (10 percent); Boston, Minneapolis and Seattle (all 13 percent) — have seen slower growth this holiday season, according to Slice. Others, however — including Riverside, CA (32 percent); Tampa (29 percent); Detroit (28 percent); and St. Louis (27 percent) — have seen big year-over-year jumps in purchases made online.

DISCUSSION QUESTIONS: What affect will Cyber Monday and Cyber Week sales have on the rest of the holiday selling season for retailers? Do you see single-day Cyber Monday events growing or waning in popularity in the years ahead?

"If online sales are not seamlessly woven into a retailer’s overall sales and merchandising process, they will lose. "

"I think you’re going to see a number of retailers who had a strong weekend will not be happy at the end of December."

18 Comments on "What does a record Cyber Monday foretell for the remaining holiday season?"

A healthy Cyber Monday is a good omen for overall holiday spending, especially online. Most e-commerce and omnichannel retailers start “Cyber Week” early and end late, just like stores have gotten into the habit of extending the life of their Black Friday specials. (I’ve already gotten my “Cyber Tuesday” e-mails from Amazon and others today.) So a one-day jump may be significant, but mostly it points to the accelerating strength of online shopping as a whole, and especially searching for deals.

It’s too early to draw conclusions. While this sounds like a good metric, especially in light of the continued growth of mobile shopping, it will take the entire holiday sales figures, adjusted for returns, to know if this is an increase in spending or cannibalization of the rest of holiday sales revenues.

Cyber Monday … cyber anything is the new NORMAL. Habits are changing and the changes are permanent. The overall experience is improving, the selection is greater and the consumer is more demanding.

The success of e-commerce demonstrates the need for retailers to embrace an omni-channel strategy and tightly integrate it within their marketing plans. Consumers see no difference between online and in-store, expecting similar pricing and availability across channels. Retailers must meet consumer expectations or see sales decline.

If online sales are not seamlessly woven into a retailer’s overall sales and merchandising process, they will lose. More people around the country are purchasing online and they expect the process to work flawlessly and to be the same as buying in-store or by phone — it is the same company after all, right?

We have seen self-gifting on the rise so far, and other economic indicators are looking somewhat positive, so I believe there will be enough spending left over to boost overall U.S. holiday sales a bit this year. Retail promotions continue to push price primarily, so this market is very much a shoppers’ market. Credit purchases vs. cash are also strong, so more household budgets may stretch a little more this season, too. For the future, I don’t see this activity slowing down in the next 12 months. I wouldn’t try to predict beyond that time frame.

The continued, rapid growth of online sales has and will continue to alter consumer buying patterns through the holiday selling season and beyond. The manic frenzy of Black Friday and doorbusters are becoming less relevant. Online sales smooth out the sales cycle and reduce some of the holiday pressure on brick-and-mortar stores. If it wasn’t already painfully obvious, all brick-and-mortar retailers need to give their online stores as much time and attention as their physical stores.

While it’s hard to say if Cyber Monday will continue to maintain its prominence on the retail buying calendar, sales events and one-day sales are part of retailing and I suspect they will continue for some time to come.

The emphasis on the word “Cyber” puts online commerce on the minds of consumers and this profile will keep on giving all year long. Stock outages or shipping delays and the risk of credit card theft may deter online consumers at times, and the benefits of in-store such as discovery, experience and immediate fulfillment will continue to be a reason for the season.

The rapid growth of online commerce, however natural and expected by now, is not good news for the retail industry. We already know as a fact that on the Internet prices always converge to a zero-profit equilibrium for any online intermediary with negative profits for any physical intermediary. A central question for industry players, and for society at large, is whether the physical store is necessary or not. If it is necessary, as I strongly believe, then it needs a new type of a market. The current market with its perfect price convergence does not offer survival chances to physical stores. There are two types of players who can bring about the required structural change: brands and physical retailers. Brands and physical stores must form a new contract in which the store is assigned not only a transactional role (i.e., a seller) but also a brokerage role (a referral provider) that serves the entire supply chain. Currently, it seems that the pain is increasing everywhere. Despite their observed behavior, I do not believe that consumers… Read more »
1
|
0
-   Share

With the ease of shopping these days it is hard to tell what one day means. What it does say is that consumer confidence is good and consumers are spending. That is a good sign for retail. Now let’s just watch those returns and see how profitable those online sales really were.

There are at least two things we can surmise from these numbers. First, the economy is strong and sales will be good for retailers. Second, retailers need to pay attention to the way consumers are buying; in-store, online, via mobile, etc. As for the popularity of one-day sales like Cyber Monday (or Black Friday), we’re seeing the lines — or should I say days — blurred by retailers who announce their Cyber Monday sales a week in advance.

I think using the “Cyber Week” definition is far more meaningful as it includes the Black Friday sales and affirms the convergence of physical and online retailing as a single shopping experience. The record numbers this year are a good omen for the rest of the holiday season (in-store and online).

The increasing popularity of online need not be a zero-sum game. I view the rise of online retailing as a legitimate opportunity for increased spending as long as the brand’s value proposition and customer engagement model recognize the changing retail reality.

We shouldn’t be too hung up on Cyber Monday as the key indicator for the holiday season. Promotions are being pushed earlier and products can be shipped later in the season than ever before. This will undoubtedly take some of the wind out of Cyber Monday’s sails, which is OK. It’s just an arbitrary Monday chosen by Shop.org back in 2005.

It’s hard to get excited about single day “comp” numbers these days, Black or Cyber or anything else. Black Friday started at least 10 days out. Already on Tuesday I have received emails from 3 retailers with “Cyber Monday EXTENDED” in the headline. It’s sort of like how Macy’s “One Day Sales” morphed into multi-day events and then into an almost 365 day presence.

Buying market share and comp sales with margin give-aways is a wickedly dangerous game … ultimately not sustainable. Add it all up at the end of the month, end of the season and you have your report card. (The article mentions “Cyber Week 15.” It will be interesting to hear about Cyber Week 16.) The snapshots and out-takes make for interesting reading along the way, but we need to see the whole movie.

Online shopping continues to grow as a percentage of overall retail. Events like Cyber Monday, Prime Day, Singles Day, etc. will force retailers to have broad assortments available at all time. Customers will demand convenience, fair prices, and high levels of service. Retailers that can offer that will continue to do well — on event holidays and any other day.

I think it is too early to say what the overall holiday sales impact will be, but there’s no doubt that more online deep discounting and cost to facilitate the sale is going to impact retailers’ bottom line.

I think you’re going to see a number of retailers who had a strong weekend will not be happy at the end of December. Win the battle but lose the war. Amazon and Walmart can absorb those low margins … can others?

The first thing one learns in geometry — well, one of them, anyway — is that it takes two points to make a line. What if an “above expectations” CM is followed up by “slower-than-expected” sales the rest of the holiday period? How would we grade the year then? How do you evaluate it at all when overall online sales are still in the rapid growth phase, and many of them are simply a movement from store > e-commerce?

Though the press loves to latch onto simple, dramatic stories, it’s a fool’s errand to try to project a long period from a much shorter one.

A strong Cyber Monday on top of a strong Black Friday is a great sign regardless of the channel used. Given that discounting by retailers started earlier this year then ever before, you could argue that we might have seen diluted sales numbers. Hopefully we see two strong Saturday sales days leading up to a Sunday Christmas. The challenge for retailers will be getting the inventory in the right locations, those that have enabled buy online ship from store and pick up in store will be able to better react to a stronger then expected online versus store sales mix.

"If online sales are not seamlessly woven into a retailer’s overall sales and merchandising process, they will lose. "

"I think you’re going to see a number of retailers who had a strong weekend will not be happy at the end of December."