What will more job cuts mean for Walmart? 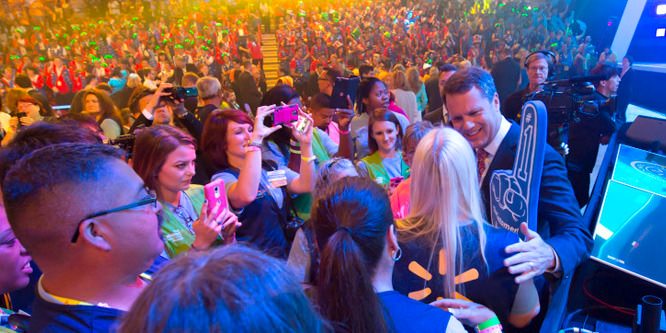 When Walmart announced it was eliminating 7,000 accounting and invoicing positions within its stores last year, the company positioned the action as a means to bring more associates to the sales floor. Now, Walmart is planning to cut nearly 1,000 corporate jobs by the end of the month, according to reports. What will that mean for its business going forward and should the move be a cause of concern for stakeholders?

The Wall Street Journal, which broke the news, said the job cuts will affect employees in Walmart’s U.S. division, including people working in human resources, e-commerce and technology. The jobs being eliminated represent more than five percent of the 18,000 positions at the company’s headquarters.

Walmart, which did not confirm the report, issued the following statement to news outlets: “We are always looking for ways to operate more efficiently and effectively.”

The job cuts at Walmart follow big investments in e-commerce by the company. The chain paid $3.3 billion to acquire Jet.com in September and last week it made a deal to land ShoeBuy.com.

Internationally, Walmart has invested in a strategic alliance with JD.com in China and is reported to be in talks to invest up to $1 billion in Flipkart, the largest e-commerce company in India.

Marc Lore, who runs Jet.com and Walmart.com, told Re/Code that Walmart remains interested in other deals in categories with “long-tail, high-margin products and harder-to-crack brands.”

In a presentation to investors in October, according to the Journal, Walmart CEO Doug McMillon said, “We have a plan to win with customers and drive growth. We will be disciplined with our cost and capital as we do it.”

DISCUSSION QUESTIONS: What is your analysis of Walmart’s current strategy for building its business? Will job cuts impede Walmart in achieving its goals or do you think they will result in the company becoming both more efficient and effective?

Please practice The RetailWire Golden Rule when submitting your comments.
Braintrust
"Pruning is healthy to growth. The quality of business decisions lies in not cutting into the meat, the muscle, needed to foster future strength."

10 Comments on "What will more job cuts mean for Walmart?"

Haven’t we heard this story before? Just last week with Sears, Macy’s and Kmart?

No one in retail seems capable of focusing on their brand permission problem. Instead they try to cut their way out of diminishing profits.

“The logical outcome of defensive warfare is surrender.” — Napoleon

I think that this move has little to do with retail strategy and more to do with overall trends in society. Automating routine tasks such as accounting and invoicing jobs is expected to be accelerated by all commercial enterprises as indicated in a recent study by researchers Carl Frey and Michael Osborne at Oxford University.

As for Walmart, its cost disadvantages vs. Amazon and dollar stores are deep and therefore cannot be overcome only by job cuts. Even a miraculous cut of all jobs won’t help. Walmart employs billions of dollars in real estate and other capital investments at a time when Federal interest rates are starting to climb again. With ever-decreasing margins, how can it show a return for this capital?!

The business model of Walmart is bankrupt and online sales will never be profitable. NEW ideas are needed urgently!

Pruning is healthy to growth. The quality of business decisions lies always in not cutting into the meat, the muscle, that is needed to foster future strength. Walmart and others have become adept at such pruning and it is this that reflects their corporate capacities.

The maturation of businesses is a naturally occurring phenomenon and staying ahead of it is difficult for companies. When price is your best weapon and you are getting beat it is time to regroup. Cutting resources will only work short-term, innovation and futuristic acquisitions are the logical answers to Walmart’s problems. Stabilize your retail business, invest in Jet and your other foreign opportunities and be sure you have the skilled people to accomplish these objectives.

The corporate layoffs are unfortunate for those affected but it’s not wrong for Walmart (or any retailer) to identify ways to prune headquarters expenses. The question is whether the cost savings exist for their own sake or will somehow be transformed into additional customer service at store locations.

Walmart knows best what it needs to do at the corporate level. Most of us will probably agree that at store-level, they need more help. In fact they are, as are most all retailers, desperate for front-line help in their stores. Walmart is big and slow. It has seen its share of failures. Making major changes at Walmart is like trying to reverse the course of a river. I don’t think they can, and will just have to go with the flow until they become another Kmart.

This is pruning, it isn’t cutting. Big companies bloat over time. They must regularly reassess their personnel needs. GE has a history of doing this and it has not impeded their moving forward in any way. This is not the same as what we have read about with Macy’s, et. al. This is good management.

One thing I have learned in my years of retailing is that you can’t save your way to prosperity. However, that doesn’t mean you shouldn’t be seeking ways to be more efficient. With efficiency gains comes the opportunity to assess assets including human capital. Unfortunately, in some cases this means allowing people to become successful elsewhere.

I don’t understand where there could be 7,000 accounting and invoicing positions within any corporate entity. These are all back-of-the-store or corporate positions. Now add another 1,000 positions also at corporate and we get an idea of where the fat is at Walmart. Prices are not going to be lowered so where is this savings going? Aha! The bottom-line for stockholders?

It’s always somewhat of a fool’s errand to question job cuts at specific companies, since they might mean either improved efficiency or reduced ability … two completely different things. (Of course one would expect the former to come about through gradual attrition rather than a targeted number, but there’s still insufficient info here to make an informed comment.)

OTOH, if Walmart wishes to cut store staff, my answer would be unequivocal: bad idea.

Braintrust
"Pruning is healthy to growth. The quality of business decisions lies in not cutting into the meat, the muscle, needed to foster future strength."