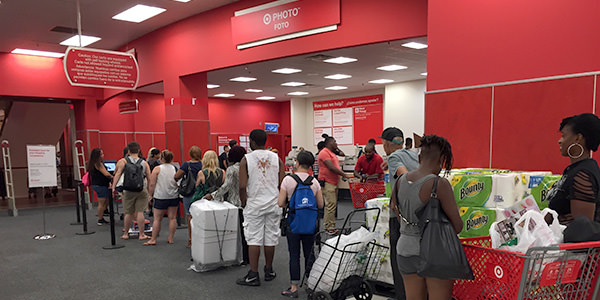 Some retailers are making the strategic decision to hire fewer seasonal workers this year, raising the concern that stores will have fewer associates available to wait on customers. Chains such as Target and Toys "R" Us, however, claim they will maintain service levels by giving more hours to permanent staff as well as the temporary employees they have hired.

One of the factors that may limit holiday hiring is the number of permanent full- and part-time employees that retail companies have brought on since the beginning of the year. Retailers hired nearly 450,000 people between March and August, up from 437,000 for the same period in 2014, according to the outplacement firm Challenger, Gray & Christmas.

Other limiting factors are the jobs that retailers are looking to fill.

"Changes in the way consumers shop are making it possible for stores to meet increased holiday demand with fewer extra workers. When retailers do add holiday workers, fewer of those jobs are in traditional spots, such as sales clerk or cashier," said John Challenger, CEO of Challenger, Gray & Christmas.

What factors are convincing retailers to hire fewer seasonal workers this holiday season? Do you think there is reason for concern, based on the industry’s hiring plans, about the service levels customers will find in stores this Christmas?

Please practice The RetailWire Golden Rule when submitting your comments.
Braintrust
"Existing workers may not be keen to clean up these messes, and in that regard I’m concerned. Service levels may be good, but the stores may look really bad."

"In a broad sense, retailers may be reacting to soft second and third quarter sales instead of gearing up for what is expected to be a healthy fourth quarter. (On the other hand, they may be satisfied that the slight increases in year-to-date hiring will get the job done.)"

I like the idea of using existing workers, as they are likely to be more knowledgeable on the retailer’s products and services.

Having said that, someone has to stock the shelves and clean up after a long day of sales and “rummaging.” Existing workers may not be keen to clean up these messes, and in that regard I’m concerned. Service levels may be good, but the stores may look really bad.

In a broad sense, retailers may be reacting to soft second and third quarter sales instead of gearing up for what is expected to be a healthy fourth quarter. (On the other hand, they may be satisfied that the slight increases in year-to-date hiring will get the job done.) There is also upward pressure on hourly wages as the unemployment rate falls.

But a word of caution to retailers: As you embrace more omnichannel initiatives like BOPIS or “ship from store” in your brick-and-mortar locations, you are putting more pressure on your sales associates to perform tasks unrelated to helping shoppers who have come to your store. The risk to good customer service may not be in the raw hiring numbers, but that the staff is being spread too thin.

All of the factors in the article will contribute to keeping service levels comparable to last year. The other factor that must be considered is the yearly increase in online shopping that consumers are utilizing. This increase will have some impact on the actual brick-and-mortar visits that stores must service.

Online shopping is creating less hiring for sure, and with increased labor costs the double whammy of trying to control costs will make the stores think twice before they add any extra costs.

The constant change in how retail is done is mind boggling, and customers still want great service, including really low prices. How do you achieve a healthy bottom-line without cutting something from expenses? Labor is the easiest way to go.

Will this have an effect on stressing out existing employees around the holidays? You know it will for some, but for the stores that can serve customers well it will ring more dollars into the registers, as happy customers spend more.

I try to hire as needed, and around Christmas we will have more overtime, which many stores factor in, rather than hire and lay off in January when things slow down (as winter weather will hurt our sales). No easy answers to this, but good luck to all my fellow retail warriors as they prepare for the upcoming holiday season.

When I first saw the headline for this story, my thought was “Wow, that’s not what I’m seeing” — because you can’t get within 100 feet of any retail store around me without some kind of help wanted sign, whether in the window, sandwich boards placed out front or yard signs placed on the street corners. My next thought was that omnichannel makes it harder to hire seasonal help anyway, because there’s no way you can just throw an untrained person at save-the-sale or ship-from-store. The learning curve of a store associate is getting much more complex, and for the training that would need to be invested it’s almost not worth the effort for seasonal people. That said, I’ve noticed retailers who seem totally fine with letting a line grow to 10+ people during non-holiday times, and I think retailers better watch out. It’s easier than ever to find that must-have holiday item somewhere else. If you make customers wait because you don’t have the staff, they’ll be able to take their business elsewhere before they… Read more »
0
|
0
-   Share

First and foremost is the rise of the minimum wage. Aggressive off-price promos have reduced merchandise margins and the new hourly wages place even more pressure on retailers.

Of course, there is risk to this change. Expanded hours require more on-floor housekeeping and stock-keeping. And “click/pick or ship” programs add store tasks that must be executed to deliver upon urgent expectations.

Expanding e-commerce receipts with lower totals are what we can expect for that channel to deal with. Lowering the number of customer service employees will sponsor many a higher number of abandoned carts as seen in a ratio of sales dollars and number of visits. This will especially play havoc with the small and medium-sized e-commerce outlets with or without the support of branding and a-b velocity available merchandise. Response time, price, site speed and ease of customer use are and will remain the keys to success in e-retail. As for the brick-and-mortar club, bigger will most likely mean less sales. Has anyone tried to use a big box store map on a smartphone? What a nightmare for Jack and Jill. Compounding this experience with fewer associates will ramp up the once-and-done visit scores in favor of the smaller specialty stores. The smart managers will understand that this is no time to slacken in inventory management. Out-of-stocks, damaged packaging and obsolete merchandise will be the final blow for many companies. With that said I wish… Read more »
0
|
0
-   Share

It is good that existing workers are going to get some of the hours part timers would have had. But I am not sure this will be enough to cover the floor during prime selling hours such as those traditionally beginning Black Friday. Which brings up another point: when will Black Friday begin this year, before or after November 1st?

“…Claim they will maintain service levels by giving more hours to permanent staff as well as the temporary employees….”

That would seem to settle the matter, though of course one could ask why they didn’t do that in years previous. Online? Perhaps.

The holiday season is a magnified version of a challenge that exists all year long — balance customer demand forcasts with staff availability and labor budget hours.

Add in some of the political pressures this year around reducing on-call shifts and compliance with Retail Worker Bill of Rights kinds of things, and this holiday season is even more complicated than before.

Yet, the best retailers are finding smart scheduling solutions that help them to spend whatever budget hours they have during the most opportune times to maximize conversion and sales, while maintaining legal compliance.

Braintrust
"Existing workers may not be keen to clean up these messes, and in that regard I’m concerned. Service levels may be good, but the stores may look really bad."

"In a broad sense, retailers may be reacting to soft second and third quarter sales instead of gearing up for what is expected to be a healthy fourth quarter. (On the other hand, they may be satisfied that the slight increases in year-to-date hiring will get the job done.)"