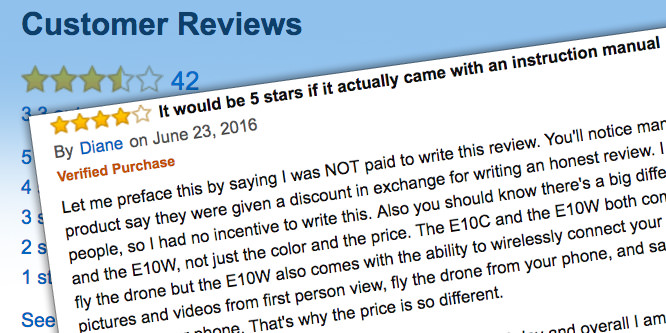 For some time, Amazon.com has allow sellers and brands to offer incentives to customers for writing reviews, such as free or discounted products, as a way to help the items gain notice in search results in its marketplace. The e-tail giant has also required that anyone writing these types of reviews disclose that they are receiving an incentive. Now, Amazon has decided to put further controls on incentivized ratings by only allowing those that pass through its authorization system to be posted.

Chee Chew, Amazon’s VP, customer experience, published a blog post yesterday announcing a prohibition on all incentivized reviews that did not go through the company’s Vine program. In an explanation of Vine, Mr. Chew wrote that Amazon — and not the seller or vendor — reaches out to trusted reviewers to post their reviews on new and pre-released items. Amazon does not make any attempt to influence reviews or offer incentives for positive ratings. It also limits the amount of reviews for each product.

“Vine has important controls in place and has proven to be especially valuable for getting early reviews on new products that have not yet been able to generate enough sales to have significant numbers of organic reviews,” wrote Mr. Chew. “We also have ideas for how to continue to make Vine an even more useful program going forward. Details on that as we have them.”

Amazon’s most recent move is another in a series of steps it has taken in recent years to shore up its credibility among customers and sellers. Last month, the e-tailer made news for requiring sellers to provide proof of purchase for brands that are often counterfeited or sold without the authorization of the manufacturer. The company has also filed suits against individuals and sellers involved in the posting of fake reviews.

DISCUSSION QUESTIONS: Do you think consumers trust reviews on Amazon.com more than those they find elsewhere? Will Amazon’s restrictions on incentivized reviews give the company further credibility with shoppers and sellers?

Please practice The RetailWire Golden Rule when submitting your comments.
Braintrust
"This is an appropriate move on Amazon's part and one that will add credibility to reviews."

"...there probably is a future where reviews are about as useful as the comments on YouTube videos, which is unfortunate."

"...my expectation is that some sellers are already working on ways to game the system."

This is an appropriate move on Amazon’s part and one that will add credibility to reviews. Along with incorporating AI to try and identify bogus reviews and “verified purchase” tags, they are shoring up what has been a free-for-all in many ways.

Smart move by Amazon. The company realizes the importance of expert reviews and is moving to make them more legitimate in consumers’ eyes. I hope other websites will follow Amazon’s lead.

The short answer is yes. The longer one is Amazon is likely the first place most people turn to when using the internet to look for items they wish to purchase online. That means the information, including the reviews, that they find there can influence them to continue towards making the purchase or continue researching alternatives. This places Amazon in a unique place in the internet purchase process. Initially consumers trusted the reviews because why would someone write one that wasn’t true? As the importance of internet reviews grew so did the temptation to create false ones (good and bad). In some case these were done by the manufacturers, but as Amazon worked to eliminate those a new source arose — reviews by professional reviewers. I use the word “professional” loosely, but these reviews were written by people paid to write them. Now we have “soft professionals” who were not paid cash but receive discounts, etc. Amazon’s latest attempt to get honest reviews should increase the credibility of the reviews posted. However my expectation is… Read more »
2
|
0
-   Share

I bought something on Amazon and the seller bugged me for two weeks to write a review. But only a good one. If I was unhappy he wanted me to call first. So I gave him five stars and two short sentences saying I liked the product, just to get him off my back. Overall I think the whole process is useless.

My faith in the reviews process has definitely been shaken by a recent purchase of, of all things, shampoo. I ordered the product after extensive reading of reviews for multiple options before making my choice, and my choice was definitely made based on the fact that the reviews for this product were much more positive than the other options. But when my product arrived, inside the box — not the shipping box, but the actual product box — I found an insert that said “review the product and we’ll send you a free bottle.”

That gave me pause. And it shows how, sure, Amazon can tighten controls over incentivized reviews in the official sense. But how could they possibly stop these kinds of end-arounds like an insert in the box? I don’t think they can. Community and transparency help, but I don’t think it will be enough. Which means there probably is a future where reviews are about as useful as the comments on YouTube videos, which is unfortunate.

It’s easy to clamp down measurably if they choose. Just as they have fees to fight counterfeits they can have penalties for sellers caught trying to “buy” reviews — if not an outright termination.

No. First, AI for reviews — another joke. AI does not replace real users and buyers.

Next — sellers will con the ‘Zon. It’s too easy not to find a way. Amazon is too focused on the front or image of the business to worry about how it really works on the back-end. PR-related elements of Amazon is all the management cares about — they are paid on PR placements and Jeff’s Amazon promotion.

For the few of us that have been studying the various fake and incentivized review issues on Amazon over the years, and for those of us that have access to real diverse data samples — this is sort of a nightmare and it is going to swing Amazon fake review problems right back to where they were in 2014.

I wrote up an article about it here, but basically these “legal” incentivized reviews that Amazon sanctioned as okay for sellers to use completely stopped the flood of hard to detect fake reviews that were a nightmare on Amazon prior to 2015. Now there is huge incentive for sellers to return to that model, and meanwhile the companies that introduce reviewers to sellers for product review exchanges have already found an easy loophole in the new TOS.

Huge PR move by Amazon. Two years from now, the fake review issue is going to be considerably worse.

While Amazon has (finally) taken steps to curtail the lobbying efforts that undermine the value and validity of customer reviews, the trust of this once valuable resource for online decision-making has been tainted. There will always be a minority that will pirate and cheat a valuable resource for their commercial gain. It’s unfortunate, but that’s the lens through which you need view customer reviews. Caveat emptor!

Fake reviews erode the credibility of all reviews and bite hard into brand credibility, so laurels to the A-team (Amazon) for taking any steps to remedy unreliable reviews. But the part of the iceberg below the surface continues to be authenticity based on consumer perception, be it positive, experiential or most important, negative. As a retailer, the justice of the marketplace should be Amazon’s foremost concern. Love people (i.e. customers), use money — and don’t confuse the two. Being in it to win it means playing for legitimacy in the long haul.

I would bet that specialized contact regarding a product brings out a “familiarity” and eager-to-please element — so it still sounds like a kind of special reason to treat the product kindly.

Maybe it’s me, but I tend to look more closely at the negative reviews and see why someone was unhappy as a means to differentiate between products to select one. So while anything that improves the reliability of reviews is of course helpful, taking the risk out of an online product purchase means looking at the less happy stuff, not the paid/influenced or other glowing remarks. Now if a product company is paying someone to write negative reviews about their competitors, I think that falls under libel and has an existing corrective path.

While most consumers realize that not all reviews are authentic, they still use them as a data point in their purchase decision. According to a recent UPS Pulse of the Online Shopper™ study, the most prevalent consumer use of a smartphone while in a store is to look up product reviews and while shopping online, product reviews are the most influential content in their purchase decision. There is no denying the value of customer reviews.

I am not sure Amazon’s restrictions on incentivized reviews will make their reviews substantially more credible than other company reviews, but it will certainly help. This is a smart move by Amazon and I hope other retailers will follow by taking similar actions to improve the authenticity and credibility of consumer review, as consumers are making purchase decisions based on these reviews.

For marketplace operators such as Amazon, one of the most important things to bring to the table is an environment where customers trust the information they see. That includes the product information and images, the prices and shipping information, and the customer reviews.

Too many sellers have tried to game the system when it comes to reviews because customers put so much stock in peer reviews. Any way that a Marketplace operator can bring more veracity to customer reviews is a good one.

Braintrust
"This is an appropriate move on Amazon's part and one that will add credibility to reviews."

"...there probably is a future where reviews are about as useful as the comments on YouTube videos, which is unfortunate."

"...my expectation is that some sellers are already working on ways to game the system."