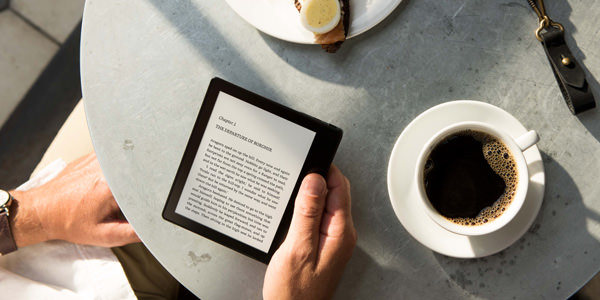 An Amazon.com press release put out on Wednesday touts the new Oasis e-reader as the thinnest and lightest Kindle e-reader ever. It also points out that the device’s dual-battery charging system provides the longest life of any item in the Kindle family. There are other product attributes that Amazon claims will make the Oasis an e-reader with a level of quality above all others.

“To lean back and read for hours, you need a sanctuary from distraction,” said Jeff Bezos, Amazon’s founder and CEO, in a statement. “We want Kindle to disappear, and Kindle Oasis is the next big step in that mission. It’s the most advanced Kindle we’ve ever built — thin and ultra-lightweight, it gets out of the way so you can lose yourself in the author’s world.”

Inhabiting the sanctuary that Mr. Bezos refers will cost Amazon customers $289.99 for the base device and $359 for a 3G version. Those numbers are decidedly higher than Amazon’s other e-readers that run from $79.99 for the base Kindle to $199.99 for the Kindle Voyage.

While reviews of the Oasis support the view that it is top of the line as promised, many do not see the value in spending the extra money to buy it. A review on Mashable by Christina Warren points out that the screen technology and resolution are no better on the Oasis than other Kindle models. Ms. Warren also points out that “tablets not named iPad (even Amazon’s tablets) do not sell for $290.”

Another review on The Verge, explains that the goal of the design team behind Oasis was to make using it “more of a paper-like instead of tech experience.” The Oasis also comes with a leather cover to further emulate print books. This approach, according to the reviewer Sam Byford, is akin to the use of cork in wine bottles. Cork costs more than screwcaps and, in the end, doesn’t do a better job keeping wine fresh.

DISCUSSION QUESTIONS:
What do you think was Amazon’s strategic goal in creating the Kindle Oasis? Do you think it will achieve that goal?

Please practice The RetailWire Golden Rule when submitting your comments.
Braintrust
"Companies whose products who don’t start with an "i" have a hard time getting their customers to dole out more money for devices that may at best be evolutionary but are not revolutionary."

7 Comments on "Will readers follow Amazon to the Kindle Oasis?"

Companies whose products who don’t start with an “i” have a hard time getting their customers to dole out more money for devices that may at best be evolutionary but are not revolutionary.

The one benefit seems to be a longer battery life. I doubt that many current Kindle users are going to be willing to invest $300 to gain battery life. They have learned how to work with their existing readers.

I expect the only way that Amazon will sell many of these is to stop selling its base Kindle and Kindle Voyage. Should they do that the risk they run is more people will opt to buy someone else’s readers rather than spend $300 for theirs and thus damage their e-book sales.

Amazon was clearly out to improve their current Kindle line, despite the cost. Unfortunately, they missed a large portion of their audience by ignoring the cost, since this product line appeals to many people because it is affordably priced. This will not achieve its goal of success (because of this price) initially, however, once Amazon starts to better manage its price (in 12 months or so), we should see sales reflect this better product positioning as the price decreases.

I can’t see spending $300 to $359 on a book reader when I already own an earlier version of Kindle and an iPad. For that much money, I want a device that multitasks. I normally don’t bet against Amazon, but I can’t see Oasis carving out a large market share.

Let’s start with that pesky cover. George correctly points out it is leather — and therefore presumably more expensive, but he didn’t mention it houses a recharging unit which allows you to go months between charges. Not a bad feature. Then there is the price. Clearly, it is too high and just as clearly it will come down. We are, after all, talking about technology here. Now, I know my distinguished BrainTrusters believe that Apple is the only technology company that can get away with a usurious “brand tax,” but I think that misses the point at worst or begs a serious question at best. Price isn’t the issue here, it is lifestyle integration. Think of it: I talk to my Echo, hit my Dash button and wander off with my multi-month Kindle in arm. Amazon is clearly trying to build a wireless purchasing/entertainment infrastructure around its customers — one so complete there won’t be any reason to leave it. Amazon doesn’t have the cache of Apple … yet … but I think that’s because it is… Read more »
0
|
0
-   Share

We know that Amazon “test introduces” products often, so who can know their strategic goal with creating a high-priced Kindle Oasis? To see if it would catch on? To see if there’d be a reaction to the price (and there seems like good reason to nix it based on price)? I remember we wrote quakingly of Amazon Fire and Amazon Firefly app a couple of years ago. What, oh what, ever happened to them?

There is a lot of money in hardware sales and Amazon is most likely aware of this. There are several key ingredients needed for continuing successful hardware sales. Faster, easier and more power are the constants in this race for profit taking. The most forgotten and deadly ingredient is practical acceptance. As voice command software evolves making smartphones easier and faster, the tablet may be heading for the heap. To make it even more difficult for the tablet, smartphones are getting more and more software that is designed specifically for the devices. In any event, the end is near enough to consider moving the kindle into the mainstream.

Amazon needs to deliver an experience with the device that consumers are willing to pay for, so introducing the Oasis with new features is a way to do that. The leather case may not be worth it for many consumers, but a month long charge may be. Experimenting to find the best way to meet consumer needs is a hallmark of Amazon’s approach to the market.

Braintrust
"Companies whose products who don’t start with an "i" have a hard time getting their customers to dole out more money for devices that may at best be evolutionary but are not revolutionary."