Will Starbucks win by giving rewards for purchases made at Dunkin’ Donuts? 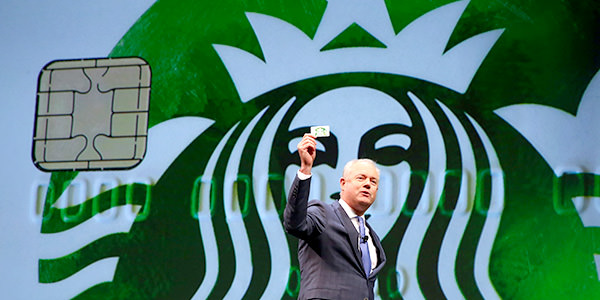 According to COO Kevin Johnson, Starbucks wanted to find a way to reward customers for using a payment card with its name on it, even if the company is handing out stars for purchases made at other businesses. That’s where the new Starbucks Rewards Prepaid Card from Chase comes in — or at least it will before the end of the year.

Several reports have speculated that the timing of the new Starbucks card announcement may be a public relations move to soothe loyalty card members upset by the company’s change last month to calculating rewards (stars) based on dollars spent instead of store visits.

In the current scheme, Starbucks Gold cardholders earn a free drink after 12 visits to the chain’s stores. Because the average customer spends a little over $5 when they visit Starbucks, it takes roughly 12-and-a-half trips for Gold members to earn a freebie. Under the new program (beginning in April), it will take 300 stars to become a Gold member, the equivalent of 30 store visits at present.

With the new prepaid card, customers will have points directly transferred into their Starbucks account whenever they make a purchase — anywhere. They may then use the stars they earn in a Starbucks store or on starbucks.com.

DISCUSSION QUESTIONS: What do you see as the benefits of the new prepaid Visa for Starbucks? Do you see a downside?

Please practice The RetailWire Golden Rule when submitting your comments.
Braintrust
"It’s hard to imagine a prepaid card as being a significant payment mechanism for Starbucks consumers. Most won’t have an interest in it and the demographic that would use it probably do not fit the core Starbucks market."

"It’s curious that Starbucks is adding such a conventional marketing tactic after establishing a leadership role in mobile payments and digital marketing."

11 Comments on "Will Starbucks win by giving rewards for purchases made at Dunkin’ Donuts?"

It’s hard to imagine a prepaid card as being a significant payment mechanism for Starbucks consumers. Most won’t have an interest in it and the demographic that would use it probably do not fit the core Starbucks market. So it’s unlikely to add much revenue to the company, yet for whatever it generates, there’s little if any downside risk.

Disclosure — not a Starbucks coffee fan so have little experience with their stores and none with their current rewards program.

With this outsider’s point of view, I see a company that changed its loyalty program so it requires its participants to spend $62.50 to get a free cup of coffee, assuming you don’t “earn” stars via some other method. But wait, if you will give us your money upfront you can use your prepaid card anywhere and earn stars for that free drink. The cost is the same but you will be able to earn it by shopping elsewhere. Such a deal!

While I may disagree with it, the program change follows a same pattern that airlines are using. Status used to be based on miles and/or flight segments, but more and more have moved to basing it on fares paid.

In my opinion this is a great idea. It gives incentives to clients and helps foster brand loyalty. I think the challenge will be to get the information out there to their customers. A great opportunity would be during the holiday season when the extra incentive may persuade consumers to purchase a pre-paid card as a gift.

The branded debit card is a tried-and-true marketing tactic used by many businesses as part of their loyalty strategy. Starbucks isn’t breaking any new ground here as these cards are almost ubiquitous in industries like travel. The card may be attractive to some of their fanatical customers but won’t move the needle to attract the broader population.

It’s curious that Starbucks is adding such a conventional marketing tactic after establishing a leadership role in mobile payments and digital marketing. I’d like to see them double-down on their mobile app marketing where they can achieve real differentiation.

The points which come from card use drove the change to the existing loyalty program. Loyalists are not happy with the shift from visits to dollars.

What business is Starbucks in?

Even the Easter Bunny says, “retail ain’t for sissies.”

I see neither an upside nor a downside. I think this is a non-event. From what I see (and I go to Starbucks daily) most of the customers use their phones, followed by re-loadable Starbucks cards, followed by cash. Are pre-paid cards that prevalent? I don’t see any compelling incentive.

With regards to the rewards program, it is not exactly as people describe. I spend $2.78 for a Venti dark. The next person in line spends $5.50 for a fancy coffee. They get one star. Should they not get more than me? Should we both get our reward when we spend the same amount of money? I spend half as much and I get the same reward.

And when I redeem my reward, I never do it for that $2.78 cup of coffee, I do it for a pastry or sandwich which could be as much as $6. So I may lose a bit on the new program, but I think most customers will win.

This is simply a broadening of availability of their programs all the way around, rewards and digital, to those customers that do not have a “credit card” (Visa or otherwise).

There is an entire segment of the market that operates in this method of payment when they are not eligible for a debit card or credit card. I see this more of an upside to which card this market uses to load their digital app from, than anything else.

Starbucks is looking to cover all the bases possible in play with their customer. There’s not a lot of downside. It speeds the transactions and unlike credit in some cases, this card will decline when there is no balance.

I don’t have an answer for this, although I liked Gene Detroyer’s comments. I just wanted to tell you that it made me want to go and get a donut, though.

It was interesting as recently I posted a Facebook update at Starbucks that I was looking at a donut shop across the street and noted the complimentary nature. One friend pointed out the donut shop had better coffee, but the rest of the comment was in agreement.

In this case, there isn’t much downside since the prepaid card doesn’t cannibalize Starbucks’ sales, Starbucks doesn’t sell donuts, and the rewards drive traffic back to Starbucks. Frankly I see it more as a gift alternative to Starbucks’ prepaid cards for those who affiliate with Starbucks’ brand who want to give something that isn’t tied back just to Starbucks.

What I see more than anything is data. This card has the potential to gather information on Starbucks customers when they aren’t being Starbucks customers. From there, Starbucks can then better hone in — and keep in tune with — customer habits while better positioning themselves for future partnerships. This, combined with its ambitions to predict what customers want to drink when they arrive at a store suggests data is somewhere at the core of this new-ish program.

The days of prepaid cards only serving the unbanked have passed. Today, it’s a matter of convenience as well as payment access.

Loyalty rewards are not new. Prepaid cards from Paypal and AccountNow offer cash back rewards. But rewards plus “no fees” would be a differentiator, as these two programs charge $5 per month.

Braintrust
"It’s hard to imagine a prepaid card as being a significant payment mechanism for Starbucks consumers. Most won’t have an interest in it and the demographic that would use it probably do not fit the core Starbucks market."

"It’s curious that Starbucks is adding such a conventional marketing tactic after establishing a leadership role in mobile payments and digital marketing."