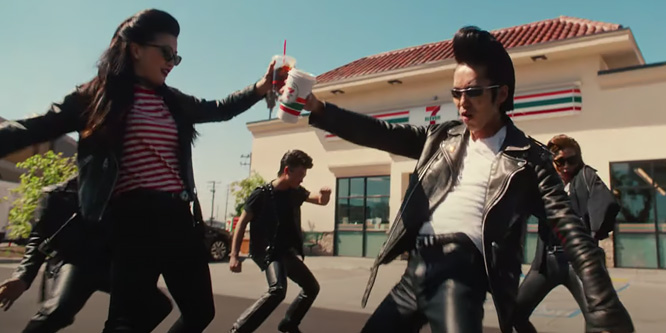 7-Eleven is launching its biggest commercial campaign in years to try to keep itself at the top of the convenience store world.

The campaign, featuring youth culture-oriented ad spots directed by experimental art house director Harmony Korine, has a budget of $70 million dollars, according to The Wall Street Journal. The price tag is double 7-Eleven’s 2020 marketing spend. The campaign is meant to draw attention to a list of technological enhancements that 7-Eleven has undertaken in recent years, which the customer may not yet associate with the brand.

The campaign, which will run for the rest of the year, comes as 7-Eleven faces a shifting landscape where the types of snacks and beverages once unique to convenience stores are more frequently available at other types of retailers. Online shopping has likewise reduced the value of the chain’s convenience value proposition.

In March, the chain opened its seventh 7-Eleven Evolution store in the U.S., the fourth in the Dallas-Fort Worth area, according to a press release. The store concept is a testing ground for the chain’s new technology and operational enhancements. Evolution stores continue to be localized to individual regions and 7-Eleven says it tweaks individual offerings in the stores based on shopper behavior and feedback. The chain has also been experimenting with new retail mainstay technology like mobile ordering.

7-Eleven finds it difficult to roll out the types of changes and innovations it has been experimenting with across all of its locations, however, because of the limitations imposed by its franchise model, the Journal reported.

Nevertheless the company has been focusing seriously on a U.S. brick-and-mortar expansion.

7-Eleven announced plans to boost its U.S. store count to a whopping 20,000 In August of 2020, according to Nikkei Asia. The announcement of the plans came as the chain inked a deal with Marathon Petroleum to acquire all 4,000-some Speedway locations, which would be added to a portfolio of around 9,000 existing U.S. 7-Elevens.

That acquisition deal, originally slated to close in the first quarter of 2021, has been pushed to the second quarter while the Federal Trade Commission reviews the transaction, according to CSP Daily News.

DISCUSSION QUESTIONS: Do you think an ad campaign like the one 7-Eleven is launching will meaningfully affect how people see the brand? How do you see franchisees reacting to the mother chain’s continual insistence on upgrades to the store experience?

Please practice The RetailWire Golden Rule when submitting your comments.
Braintrust
"As important as engaging the customer is, the stores need the right product at the right time or those shoppers will go elsewhere."

"Perhaps a long-term strategy of unique and healthier products, in addition to quick-charge EV stations, might improve their long-term store traffic."

"I’m wondering if the folks at 7-Eleven have been reading too much stuff about store experiences. It’s a convenience store."

7-Eleven just recently opened a store in our small town in Washington state and it was a big deal. I have received numerous mobile marketing ads that promote online ordering and delivery. It is taking the convenience of convenience stores to a new level. While it isn’t a draw for me, it will appeal to some consumers that need something urgently and don’t have time to drive to the store. One of the biggest challenges has been, and will be, to get franchisees on board.

In many ways, 7-Eleven is a great retailer. However, its U.S. stores are variable – some are great, others are in dire need of an upgrade. As such, it is good to see it focusing on elevating the experience. The new campaign – or at least the ad in this article – looks reasonable, but it’s not exactly scintillating nor does it really explain why people should use 7-Eleven or the improvements that are being made. I think placing more emphasis on services like delivery and rewards (which are briefly noted at the end of the ad) or on the upgrades happening, or on what 7-Eleven has to offer would be sensible.

I have never thought of 7-Eleven and its brethren as a destination. I have always seen convenience stores as — well — a convenience. You go to the one across the street from the high school, on the way to/from work, or on the highway when traveling. And if it turns out that it isn’t 7-Eleven, no worries.

The ask they are making with this spending is a lot. The campaign is really saying, “we have something different to offer, so skip what is close and convenient and come to us.”

I do think these ads will reach the intended audience. The campaign is fresh and focused on their key value prop – convenience, fast service and a great assortment. For the franchisees this is such a competitive market, 7-Eleven’s continuous innovation in services and products is their secret sauce. If you choose to stay stagnant you are doomed.

I’m wondering if the folk at 7-Eleven have been reading too much stuff about store experiences. It’s a convenience store. It has lots of food, only some of which may be good for you (as opposed to tasting good, which is most of it). Make it clean, make it with aisles wide enough to walk through, make the products visible, and have someone friendly at the counter. I’m not sure you need much more than that.

The user experience is less than half the tech challenge facing 7-Eleven and other c-store chains. The back-end tech in c-stores has been badly trailing other retail channels, with the notable exception of fuel-related systems. Pricing, assortment, replenishment, even POS are dated at many franchise and corporate stores. As important as engaging the customer is, the stores need the right product at the right time or those shoppers will go elsewhere.

I didn’t see any tech in that commercial, and $70 million to promote a 79 cent Big Gulp seems excessive.

The “Take it to Eleven” tagline though is perfect for 7-Eleven. What took them so long? Spinal Tap, the movie where “these go to eleven” originated, came out in 1984.

Have to love a Spinal Tap reference, Georganne!

In 2019 over 60 percent of total sales and 36 percent of gross profits came from fuel sales. That means fuel purchases have traditionally been the biggest reason people visited c-stores. But auto manufacturers and government incentives are on track to shift U.S. car sales to full electric lineups within the next 10-15 years. 7-Eleven is smart to realize that electric charging is not a viable replacement for the incremental reduction of fuel sales they will experience from today forward because charging can be done almost anywhere. This campaign is the start of repositioning their value proposition in the minds of shoppers – especially Gen Z and Millennials, who are the biggest purchaser of snacks and quick meals at c-stores.

But if technology can give us a 10-minute charge, think of the sales they will make while people wait those 10 minutes. Over the years it has dropped from eight hours to 30 minutes, 10 minutes by 2030 or before is reasonable.

Like my friend Gene Detroyer pointed out, people don’t seek a particular brand of a convenience store, they just seek convenience. Whatever is the nearest works. From that standpoint, I commend 7-Eleven’s initiative to counter the online attack by joining it. Over the last 12 months, I have seen a lot of teens pick up biking in a group, just like the ones shown in the ad. They will surely relate to this ad and would love convenience at their fingertips. As for franchises to get on the bandwagon, I think they will soon be financially motivated when they see others gaining from the tech advancement.

Being cool and drinking Slurpees is one thing, but trying to drive business to its retail stores by focusing on Gen Z might be a waste of money.

What really drives most customers to a 7-Eleven? Simple Answer: A car or truck. With most vehicle manufacturers transitioning to EVs by 2025, 7-Eleven must focus on determining how they are going to get these e-drivers to stop if they only sell petrol.

Perhaps a long-term strategy of unique and healthier products, in addition to quick-charge EV stations, might improve their long-term store traffic. I envision an ultra-modern 7-Eleven of the future with a state-of-the-art curved glass tech waiting area where customers can plug in at the same time their vehicles are. Slurpees will surely follow.

The new spot certainly does give a refreshing, new take on 7-Eleven. It’s likely that it will resonate with the right audience. 7-Eleven parking lots are already a social gathering spot in some neighborhoods. Leveraging this insight boosts authenticity in the creative and brand message which is what consumers want to see today.

Still, franchisees may not find the ongoing upgrades as inspiring. During a time when store traffic has been down, the last thing owners want to hear about is investing toward longer vs shorter term gains. An upgraded experience is always nice, but you can’t take experience to the bank.

Braintrust
"As important as engaging the customer is, the stores need the right product at the right time or those shoppers will go elsewhere."

"Perhaps a long-term strategy of unique and healthier products, in addition to quick-charge EV stations, might improve their long-term store traffic."

"I’m wondering if the folks at 7-Eleven have been reading too much stuff about store experiences. It’s a convenience store."