Amazon adds restaurant delivery to its menu of services 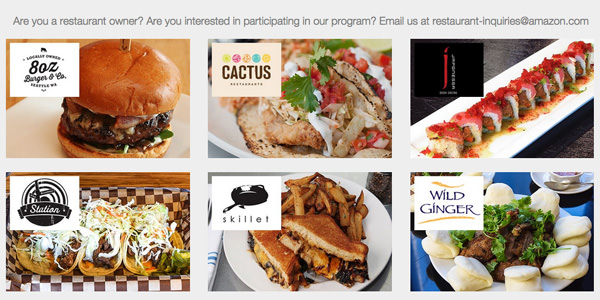 Even as Amazon faces new competition in grocery delivery from Google, the e-tailer is looking to move into another equally crowded area of food delivery — restaurants.

Amazon is piloting a program in Seattle that brings food from restaurants to peoples’ doorsteps. This model, which has been common for pizza parlors for decades, has more recently grown popular for other types of restaurants in large part due to the increasing prominence of third-party sites and delivery services.

According to USA Today, the Amazon restaurant service is being piloted as part of the Prime Now program. Prime Now, itself a benefit of the Amazon Prime service that is available only in select cities, allows members to get Amazon orders delivered in one hour for $7.99 or within two hours for free. Prime members in Seattle will be able to order delivery from participating downtown restaurants through the Prime app.

Amazon’s current list of local restaurants indicates a potential focus on a foodie client-base, rather than a general fast-food audience. TechCrunch reports that Amazon says it has set a "high bar" for restaurants for which it will deliver. While no big chains are currently associated with the endeavor, Amazon is not ruling out their participation.

Online ordering from restaurants through third-party sites has caught on over the past decade with companies such as Seamless and GrubHub (which, as of a 2013 merger, have been two brands of the same company) dominating the space. Until recently, these services handled the ordering and restaurants had their own staff fulfill the deliveries. However, according to a Crain’s article, GrubHub had been testing its own delivery service and is now taking over the delivery duties for a percentage of the restaurants for which it facilitates online ordering.

GrubHub did not indicate to Crain’s how many delivery people it would be employing to handle the fulfillment.

Other names known in both e-commerce and delivery are also rushing to take on the work of delivery for restaurants. After acquiring a delivery startup called OrderUp, Groupon launched a service called Groupon to Go for restaurants, which it claims saves users money on the food they order.

And as Uber continues to try to expand into areas outside of ride-sharing, it has recently rolled out UberEats in a number of major cities which allows users to order limited menu items during certain parts of the day.

Please practice The RetailWire Golden Rule when submitting your comments.
Braintrust
"I wonder if Amazon is joining the restaurant delivery game too late. The market is already quite saturated (at least in New York, and I assume Seattle is the same). Seamless/Grubhub is already essentially synonymous with ordering take out."

"Amazon can do anything it wants, but long term I don’t think the "throw it at the wall and see what sticks" mentality they are deploying is going to help them."

I wonder if Amazon is joining the restaurant delivery game too late. The market is already quite saturated (at least in New York, and I assume Seattle is the same). Seamless/Grubhub is already essentially synonymous with ordering take out. I don’t see them going anywhere unless Amazon starts offering some serious perks. This added with their tendency to jump ship as soon as any product or service beings to struggle makes me doubt that this program has any potential.

Amazon will do well in the cities they dominate with their new ideas and expand from there if it is profitable. They have their fingers into every facet of goods and services, and will continue to push through with more and more services. Again as has been stated here before by many others, the larger urban areas will see this first, and the less populated rural areas may or may not see this service at all. The demand for all these services is there for the higher income folks. And who wants to drive in these big cities anymore? It takes an hour to go five miles and back. It should do well.

As is Zel, I’m skeptical about Amazon’s chances to break into urban markets. Seamless and GrubHub do a pretty good job and cover a pretty wide swath of eateries. They charge small fees to the restaurants, so their services are free to consumers (assuming the restaurants don’t charge delivery which I believe is true in most cases). Amazon faces an uphill battle.

Amazon can do anything it wants, but long term I don’t think the “throw it at the wall and see what sticks” mentality they are deploying is going to help them. The company has a core constituency that will go for anything they offer, but as they move farther out on the curve, I think fewer and fewer people are going to care about their secondary offerings. I also wonder if they are trying to cover for saturation and slower growth in their core businesses. My recent experience is that for the commodities I’m buying more and more online, they are not price competitive and are getting a lesser share of my business. I’m probably not alone.

Can Amazon do it? Sure. Is it the right thing to do? Not so much.

As I am prone to mention when talking Amazon, “Where’s the money?” I am certain that Amazon sees this as a way to boost its Prime business, but the margins in this game are slim, slim, slim.

What is the “balance sheet” of Amazon’s advantages and disadvantages?

Amazon’s assets include a higher end/higher spend potential customer base and its existing PrimeNow delivery, including trucks and tracking technology. The market is moderately attractive due to size and lack of delivery penetration compared to the number of units, especially with higher end restaurants

Amazon’s liabilities (competitors’ assets) in this case are a crowded space with Seamless/GrubHub, UberEats, Group to Go, Postmates, and the like. Beyond the national players, there are local champion startups. And this is a low margin category dominated by “no frills” buyers.

The reason we are even discussing this is because of Amazon’s “appetite” to tackle large markets because they are large and not because they are profitable, as illustrated by AmazonFresh and AmazonLocal before. I don’t expect much profit out of Amazon Restaurants, but I can see hanging around as part of an “encircle the customer” strategy.

Braintrust
"I wonder if Amazon is joining the restaurant delivery game too late. The market is already quite saturated (at least in New York, and I assume Seattle is the same). Seamless/Grubhub is already essentially synonymous with ordering take out."

"Amazon can do anything it wants, but long term I don’t think the "throw it at the wall and see what sticks" mentality they are deploying is going to help them."