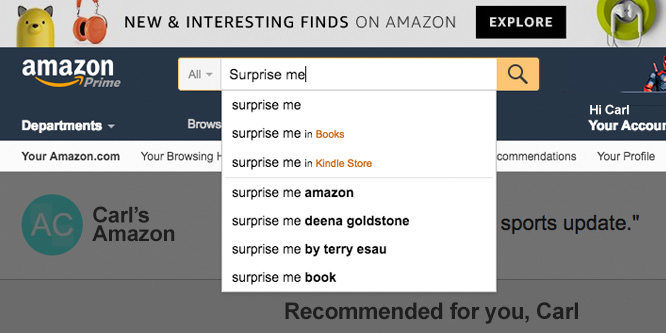 Through a special arrangement, presented here for discussion is a summary of a current article from MarketingCharts, a Watershed Publishing publication providing up-to-to-minute data and research to marketers.

According to a new survey, 55 percent of U.S. consumers begin an online product search on Amazon.com, up from 44 percent at the same time last year.

That compares to 28 percent who will do so using a search engine (versus 34 percent last year) and 16 percent using a retailer’s site (down from 21 percent in 2015), according to BloomReach’s “State of Amazon 2016.”

Retailers may want to take a closer look at personalization as a means to entice shoppers, according to the BloomReach survey, as only one in three feel that Amazon’s site personalization and product recommendations are superior. Further, 41 percent said that better personalization would make them more likely to buy from a retailer over Amazon.

Please practice The RetailWire Golden Rule when submitting your comments.
Braintrust
"It’s not a stretch to generalize that Amazon has a relatively unbeatable advantage in product search. "

"In my discussions with consumers, most visit Amazon first — even if they don’t buy there. The reason: ratings and reviews."

"Two caveats on Amazon’s leadership timeline: how long Jeff Bezos can remain hyper-active at the helm of the company and..."

Given that Amazon has been “obsessed” with customers for several decades plus, it’s not a stretch to generalize that Amazon has a relatively unbeatable advantage in product search. At least in most categories and certainly as a broad-line merchant. First, there is a cultural advantage. Bezos gets it far beyond that of most retail CEOs, and he has for along time. His leadership, unwavering when it comes to customer-centricity, is nearly unrivaled among his contemporary peers. Second, there is a technological advantage. Amazon has continued to innovate and its extension and lead with platforms like Echo/Alexa are a testament to this. Third, Amazon has momentum. Just look at the metrics comparison year over year. Stunning in its power to continue to push its lead. Fourth, Amazon has earned the trust of its customers and, in turn, benefited from the engagement provided by that trust. Its primary business is not selling ads which makes it a formidable competitor to Google and others in paid search. Finally, Amazon leads in its ability to innovate and expand its… Read more »
0
|
0
-   Share

I often start my search with Amazon only because I have Amazon Prime. If I think Amazon will have the products I want, I check there first. However, I also check other places. I don’t know about the rest of you but I’m seeing higher prices on Prime and can usually find the same product elsewhere for a better price. Dependent on the shipping, I may actually save money buying elsewhere.

As to whether Amazon has an unbeatable advantage on search? I would submit that it is more about price. If they keep jacking the price up on Prime? Well, who knows.

But that’s just my 2 cents. Go ahead and ding me if you must.

In my discussions with consumers, most visit Amazon first — even if they don’t buy there. The reason: ratings and reviews. Consumers trust each other and a fair review is worth many times a brand’s advertising-speak. Since Amazon is so far out ahead of the pack in terms of reviews, they stand to continue to build momentum as shoppers prefer to have one trusted space to get their info (vs. trying to find the most recent site).

In business cycle terms, Amazon certainly has an enviable moat strategy providing the company a short term unbeatable advantage in product search (one to five years). Going out further, nothing stays on top forever even if we can’t see those details today.

Sources of disruption to Amazon’s apparent unrivaled primacy? On the competitive side: investments in new technology, deep organizational changes and a new breed of visionary leadership to guide the necessary transformation. The diffusion of artificial intelligence and the shift to real-time computing coupled with the redesign of organizations to not only flatten but eliminate silos and empower employees will provide the foundation to challenge Amazon — as all eyes turn to 1:1 personalized engagement with consumers at the lowest possible cost.

Two caveats on Amazon’s leadership timeline: how long Jeff Bezos can remain hyper-active at the helm of the company and the point at which Amazon’s wild success spills into hubris.

I use Google to find products then I visit the con shop of Amazon if needed. Google is the best retail and buying advice website. Retail media people just love to write about Amazon. Amazon is really not that amazing. Alibaba is more amazing — go sign up for that site too. To media people that believe they are a retail vertical: find a new topic for material — make Amazon and their massive PR department your LAST CHOICE. We and consumers are tired of the filler.

Amazon’s lead in product search is a direct result of the company’s marketplace model. Customers start at Amazon now because they are used to Amazon pages coming up first in Google searches anyhow. This is due to the SEO bump that the marketplace model provides. Because there are more products in the catalog, there is more content indexed by search engines. Customers know they will find what they are looking for on Amazon — the company has a broad assortment and offers fair and competitive pricing. Customers know that there are very few other sites that will offer all that Amazon can, so they just start at Amazon. As more retailers adopt the marketplace model, it will be interesting to see if they can cut into Amazon’s lead.

Amazon has an undeniable lead in product search, but there’s 2 big reasons not to count Google out quite yet. First, Google is the search engine for everything else and has lots of opportunities to co-opt product placement within this context. Second, Amazon needs to have the discipline not to skew shopper search results for its own purposes — and judging by the make up of their self-reported Best Seller lists and ongoing controversy over fake reviews, there’s lots of room for improvement here.

Amazon’s advantage doesn’t just include their search, but also their position as the lowest selling price on the Internet (most of the time), PRIME low cost or free freight, and a first to market presence that will be unbeatable for years to come. Add to this the placement that the Amazon shopping App gets, and you have a multi-level strength which makes Amazon the 800 pound gorilla in online shopping.

Does Amazon have an unbeatable advantage? Are you asking if it’s over? Over? Nothing is over until the customers decide it is! Was it over when the Germans bombed Pearl Harbor? Was it over when Lidl announced plans to open stores in New Jersey? Hell no! Here’s how to defeat Amazon. Retailers need to fully embrace Google to make Google’s search the true Zero Moment of Truth touchpoint. Retailers need to do the equivalent of what they did on the supply chain side, but this time on the demand side. In addition, Google has a chance to make Google Search an even better experience by leveraging their recent FrameBit acquisition. FrameBit represents a way for content creators to share their know-how around the pros and cons of products and services. FrameBit will help reviewers earn more than a “badge” and perhaps even gain minor fame beyond the silos of Amazon’s product review pages. Google has the AI/machine learning/deep learning/search chops that when combined with Google Home could draw searchers away from AMZN with new and… Read more »
0
|
0
-   Share

[Moderator’s note: I missed the reference at first, and could kick myself. =D ]

I look at Amazon as a search engine — with this big difference. The people searching have their credit card in their hand. The advantage is that, like Google, everyone knows they can search the site to get information, product reviews, price comparisons and more. They were early to the marketplace and are huge. They do personalize the experience based on buying patterns, recent searches and purchases. Plus they are consumer friendly. Yes, they have a definite advantage!

Braintrust
"It’s not a stretch to generalize that Amazon has a relatively unbeatable advantage in product search. "

"In my discussions with consumers, most visit Amazon first — even if they don’t buy there. The reason: ratings and reviews."

"Two caveats on Amazon’s leadership timeline: how long Jeff Bezos can remain hyper-active at the helm of the company and..."