Amazon has plans to deliver packages to car trunks 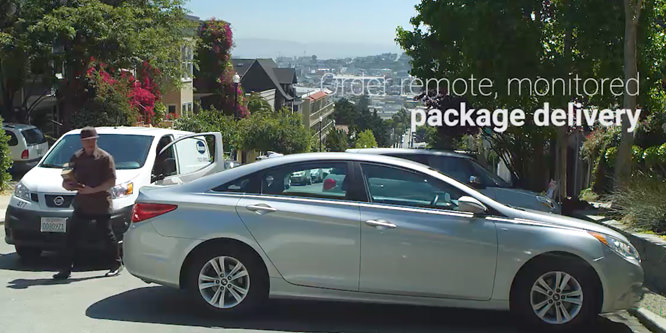 Where will they deliver online orders to next? Walmart recently announced it is testing deliveries directly to refrigerators located in customers’ homes. Now, Amazon.com is in talks that would allow it to put packages in the trunks of customers’ cars or drop them inside of homes instead of outside where they can be stolen by “porch pirates.”

CNBC reports that Amazon is negotiating with Phrame, which makes smart license plates that enable deliveries to car trunks. The Phrame device fits around a license plate and holds the car’s keys in a secure box. Users or delivery drivers, in the case of Amazon, unlock the box with their smartphones. According to Phrame’s website, couriers receive one-time and time-limited access to open a car’s trunk to make a delivery.

Amazon, according to CNBC, has experimented with in-trunk deliveries before. It tested a program with Audi and Daimler car owners in Germany in 2015.

Like Walmart, Amazon is also interested in making in-home deliveries. While Walmart is working with the smart lock company, August Home, to gain one-time access for deliveries, Amazon is reportedly developing its own smart home doorbell to do the same.

The new initiatives are part of Amazon’s plan to reduce theft of packages dropped off at customers’ homes. A survey of 1,000 consumers by Shorr Packaging Corp. found that 31 percent have had a package stolen. Forty-one percent of those surveyed said they do not buy certain products over concerns that they will be stolen.

“Unattended delivery is the least desirable of last-mile fulfillment options as it leaves the package exposed to all kinds of risk,” Natalie Berg, an analyst at Planet Retail RNG, told CNBC. “It’s not just the financial cost but also the impact that a failed delivery can have on brand reputation and customer loyalty. Nothing makes shoppers more irate than missing a delivery.”

DISCUSSION QUESTIONS: How big a problem are porch pirates for retailers selling online? Do you think that in-home, in-trunk or other forms of more secure deliveries will replace the current system of leaving packages unattended?

Please practice The RetailWire Golden Rule when submitting your comments.
Braintrust
"This is a good solution and is part of a raft of initiatives around improving delivery, which has always been the Achilles’ heel of online retail. "

"This initiative is proof positive that Amazon is testing every possible improvement. Because they can."

"Kudos to major retailers like Amazon and Walmart who are resolving the security issue of the last-mile."

Porch pirates are a huge problem for retailers. Folks in my neighborhood regularly report packages being stolen when they are not home to receive them. In-home, in-trunk, local lockers–all are ways to prevent theft. These alternatives will never completely replace at-home deliveries, but they offer alternatives that benefit consumers and retailers alike.

Unlike in-home delivery, which consumers consider quite intrusive, the car trunk seems to be an acceptable location for many consumers. The tests in Europe, first by Volvo and then by Amazon with Audi and Daimler, were generally considered successful. Given the American car culture and our dependence on driving to work, this may be even more attractive to all but the urban public transport commuter.

This idea appears to have limited value and smacks of an attempt to push the envelope to the point of creating a frantic environment. Society doesn’t need all that immediacy. Is it worth the effort?

Fortunately I have never had that be an issue but I understand that porch pirates are a serious issue for retailers and purchasers. Will the alternatives mentioned replace leaving packages unattended? The short answer is no. However they will be part of the home delivery ecosystem. The issue for some home owners will be, does the added cost of the securing technology outweigh the risk and inconvenience of potentially having an item taken?

This is a good solution and is part of a raft of initiatives around improving delivery, which has always been the Achilles’ heel of online retail. More flexibility with delivery will likely stimulate demand as according to our research there is a large body of consumers who don’t use online more because they dislike packages being left outside their homes.

Haven’t I read that some houses are being built with lockers which allow access from the outside as well as inside of the house? This is a great concept for many purposes in addition to home delivery. But for those who don’t have a new house with a locker, let’s think about some kind of shed. I’m just not of the opinion that many folks will want delivery people inside their homes. Car trunks? That is OK but again, puts car theft at risk. What have we become now when one of the biggest issues Amazon has to think about is how to get that package the last mile? Sad but true. And that’s my 2 cents.

Amazon, with half of online retail in its hip pocket, smells blood and is putting its foot on the gas with a flurry of new test initiatives. They can afford to. They can afford to fail on a few tests because they’ve won so big on the tests that have succeeded in the past. One look at this forum is proof that Amazon is attracting attention at every turn, and potentially distracting retailers. How many Amazon questions per week do we answer? Which moves are the equivalent of the U.S. Star Wars initiative in the ’80s? And which moves will succeed? If porch pirates were a threat to e-commerce, then e-commerce wouldn’t be the fastest growing retail sales channel. If I’m worried about an unattended package, then I’ll be even more worried about sending a delivery person into my unattended house. Or my unattended car trunk. This sort of initiative is proof positive that Amazon is testing every possible improvement. Because they can. Will solutions to the problem evolve? Of course. But whatever that package… Read more »
2
|
0
-   Share

When I was a child living in a neighborhood in Detroit I was pretty small. So when people would lock themselves out of their house, they’d have me crawl through their “milk chute” — installed back when home delivery of milk (Detroit also had a great juice delivery company called Home Juice Co. and I still remember their papaya juice 50 years later … ) and open the door to the house.

Reconfiguring houses/installing “package chutes” would make all of this a lot easier. I remember what, 10 years ago, there was discussion about Amazon lockers for the home, long before the more centralized locker systems set up by Amazon, UPS and others. But nothing came of it. As apartment buildings are installing package lockers, such can be reinstalled in houses too.

Porch privacy is not only a problem for the actual delivery of products, but it causes the consumer to be wary of future deliveries. My mail was stolen from a public mail box area a few weeks ago, and my neighbors and I are being more careful about what gets put in the outbound mailboxes and which products are delivered to the inbound mail boxes. There will be more secure deliveries done in the future as the technology to support it become cheaper and more ubiquitous.

I live in a highly secure building with limited access. I’ve had packages left at the building entrance at 8pm on a Sunday night. I learned that overnight delivery can be a poor option and I should only choose delivery by US mail. Be safe and just let the mailman bring it, put it in your locked postal box or leave it with security during business hours.

Until recently, porch theft was not truly a concern for most retailers, but the last 2 years have certainly changed this. Personally, I can even vouch for this rise. However, this is not just about security of access but security of data as well.

Larger and larger issues with breeches in Big Data storage have allowed increased access to customers’ personal information so that online orders can be initiated and sent to a customer’s house, where the false customer is waiting close by to pick up whatever deliveries are arriving that day before the homeowner returns. Securing the delivery place helps, but unauthorized transactions using stolen data and IDs are where everything starts. Secure the data first, then secure the placement of the deliveries. We cannot put the cart before the horse.

Who’s fault is it when the deliver appears to not show up? The retailer sent it out, but it could have been lost or stolen. Once that retailer turns it over to the shipper, does that mean they are no longer responsible? As a lawyer I could argue that might be true. As a retailer you own the problem, because it comes back to you. Are you really going to say, “Call the police. Not our problem. We see that it was dropped off yesterday at 4:00.”? NO! You are going to accept that you want to do business with them again and you will either ship another product and/or work with them and whoever else may be able to help (the shipper, authorities, etc.) to get them their product.

So, the in-home or in-trunk is a brilliant solution. Kudos to major retailers like Amazon and Walmart who are resolving the security issue of the last-mile.

It is a problem for consumers, retailers and delivery companies. Here in Australia, our local Auspost is launching a product called receva which is kind of big, smart secure post box, intended to be used for packages.

Braintrust
"This is a good solution and is part of a raft of initiatives around improving delivery, which has always been the Achilles’ heel of online retail. "

"This initiative is proof positive that Amazon is testing every possible improvement. Because they can."

"Kudos to major retailers like Amazon and Walmart who are resolving the security issue of the last-mile."