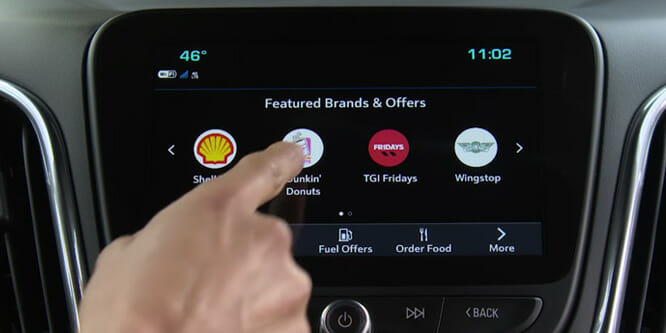 General Motors has launched an app that allows customers to easily shop major food establishments while they’re on the road — and some auto safety advocates aren’t happy about it.

The app, called Marketplace, allows drivers to place orders for coffee, reserve hotel rooms and browse deals on an in-dash touchscreen. The service is being positioned as a simpler, safer alternative to using smartphones to place mobile orders.

“For most retailers and consumer brands the daily commute is the only time not accessible in a consumers’ day,” said Santiago Chamorro, VP for Global Connected Customer Experience, GM, in a statement. “Marketplace gives merchants the ability to more safely engage with drivers and passengers in a meaningful way that provides true value for our customers.”

Starbucks, Dunkin’ Donuts, Wingstop, TGI Friday’s, IHOP and Applebee’s are among the brands initially involved with the app. Drivers can find the nearest location, order and pay ahead of time. Shell, ExxonMobil and Priceline (for reserving hotels) are also partners.

Marketplace is scheduled to be rolled out to millions of 2017 and 2018 model automobiles with the compatible infotainment setups.

Critics of the app are concerned that, while perhaps safer than smartphone ordering, the app encourages shopping activities that may divert drivers’ eyes off the road.

Being associated with an app like Marketplace could be a liability for restaurants or retailers integrating with the app, especially with an alarming number of accidents already being caused by drivers using apps from their smartphones. A New York Times article from last year cites tech distractions as the primary cause of the biggest spike in traffic deaths in 50 years.

DISCUSSION QUESTIONS: Is the ability to order and pay from car dashboards a safer convenience or too risky for drivers? Should merchants be hesitant to involve themselves with services like Marketplace?

Please practice The RetailWire Golden Rule when submitting your comments.
Braintrust
"When driverless cars are developed to the point where a driver does not need to monitor driving, then this app may be appropriate. "

"It looks unanimous among the BrainTrust that this is a bad idea. Great minds think alike."

26 Comments on "Are on-the-road shopping apps helpful or hazardous?"

Wow — why would anyone think that taking a driver’s eyes off the road to shop would be a good idea? When driverless cars are developed to the point where a driver does not need to monitor driving, then this app may be appropriate. Just because drivers may be breaking the law by using their smartphones to shop while driving does not mean cars need to encourage such a distraction.

Totally agree! If this were simply a voice assistant feature without the use of a touchscreen maybe it’d be okay, especially if it pulled drivers in-store without taking their eyes off the road on the way. But this is just bad, and a bad look for the brands that opt in to appear on this service. The future headlines I’m imagining for those retailers are too macabre …

I totally agree with you. What happened to safety on the road? Even the installed GPS systems tell you not to take your eyes off the road. There are too many drivers today that still think they are sharp enough to read, text and send messages while driving. Enough. (One man’s opinion.)

One can go from the sublime to the ridiculous. This is only acceptable to me if the car is in park. Otherwise it’s stupid (and not necessary).

Ridiculous is a good description!

Well said Bob. Stupid and not necessary is the absolute descriptor here.

The video here is fascinating … it shows that the app doesn’t actually save the driver any time, but instead just shifts the transaction from the store to the car. Camille is right — an app like this is appropriate only for driverless cars.

To say that this is concerning is an understatement. Yes, we are in a digital-first, always-connected world, however there have been studies which indicate that using smartphones or apps while driving is essentially as bad as driving while impaired. There have been too many incidents of distracted drivers causing major accidents and harm to others.

While I applaud continuous innovation and the desire to provide consumers with another method of buying products, the “shopping while driving channel” is not a sustainable or safe service. We need all drivers to fully concentrate while driving, and this e-commerce channel would potentially enable the opposite.

A quick search tells me that in 2015 alone, 3,477 people were killed and 391,000 were injured in motor vehicle crashes involving distracted drivers. Why are we actively creating more distraction to drivers?
I don’t know about you, but the last time I went to Dunkin’ Donuts the service was quick (albeit the pastry not the freshest). I’ll take those extra two minutes to park and order to potentially prevent injury or worse.

If used as shown in the video, the app is fine. The problem is, many drivers will use it on the highway going 70 MPH or higher. Here in Florida, I’ve seen drivers use iPads while going around a traffic circle. If used as intended, it’s fine. It also may be a safer substitute instead of drivers using their phones or tablets while driving, but none of these things are safe, and I’m sure lawyers are licking their chops on this one.

This poor and dangerous example of UX is why voice bots will overtake chatbots in implementation. Back in 2000, Mercedes-Benz used to offer a personal shopping service where you speak to an assistant on the phone while driving. States and insurance companies will not allow “finger touching” UX in automobiles after the first few incidents.

As much as I dislike sharing the road with distracted drivers, these apps are little different than the ones on smartphones and consumers are going to use them. For me, self-driving cars can’t get here soon enough.

This is a terrible idea. Of course people will be looking at the screen instead of the road. As it is they now they apply makeup, do crosswords, eat, and argue with God knows who — all while driving. So how does it make sense to give them yet another distraction? As to retailers, which company wants to be the first associated with a fatality caused when a driver lost control of his or her vehicle while placing an order for a triple soy latte?

In-car ordering will distract the driver which is a bad idea. Having said that, drivers will be ordering from their cars using their phones as they continue to expand the use of smartphones. If Marketplace is safer then drivers may migrate to it. I would suggest to the Marketplace developers to make it voice activated as a safer alternative to pressing screen icons.

Merchants should place their toe in the water and try Marketplace to see where the technology and liability leads.

Totally agree! I also agree with Joanna. If this were voice-only, maybe I could go for it. For my 2 cents.

Lee – You’re on to something regarding a voice app. “Hey Chevy” might be an acceptable mode of interaction for drivers, but touchscreen interactions are asking for trouble.

Some people can’t even walk without crashing into someone while using their phone, so I’m going to give this one a great, big NO.

Here’s the revealing comment: “For most retailers and consumer brands the daily commute is the only time not accessible in a consumers’ day.”

In other words, this app wasn’t created around drivers or passengers — but for GM to sell ad space to companies. And that’s a bad start.

I suppose this is my opportunity to trot out my automaker complaint: How are they getting away with ads that promote distracted driving? The spate of “auto stop” ads do essentially that.

This app seems to just carry that disconnection from the consumer/driver even further.

Are we really trading the sale of one more donut over safety? Ridiculous proposition.

If safety is judged by how something will actually be used as opposed to how some marketing guru claims it was designed to be used, then no, these aren’t “safe.” In fact, as TV screens (visible to drivers) have long been illegal in California, and I would assume other sates as well, I’m surprised that other screen-based (navigation, etc.) systems have been allowed. Of course legislatures have always found it easy to ban things … just as long as it (only) affects people younger than they are.

Future lament: “My defroster stopped working after my pizza order from Domino’s.”

It looks unanimous among the BrainTrust that this is a bad idea. Great minds think alike. 🙂 I suspect we won’t be waiting very long before there are reported accidents caused by distracted drivers and it becomes against the law. As Camille points out, the only way this becomes a practical concept is when we have driverless cars.

Two immediate considerations arise when it comes to GMs in-car Marketplace offering, although there could be other, additional points that emerge from a deeper examination of the capability. The first concern is obviously safety — and no spin of the better-than-smartphone variety makes this touchscreen shopping interface a smart choice for drivers. In the driverless future, maybe, but we’re obviously not there yet. And even if Marketplace, or a similar interface, were to focus on voice engagement and not touch, research shows that even voice commands can result in distracted driving. The other observation is about whether this is a feature that solves a consumer problem. The answer, if we base our analysis on what Santiago Chamorro, GM’s vice president for global connected customer experience, told Reuters on December 19, is that Marketplace is a revenue stream for GM, one that’s financed by the merchants who show up on it, and GM also expects to share a portion of the revenue per transaction. Are we putting the consumer at the center of our decisions? Is… Read more »
0
|
0
-   Share

Braintrust
"When driverless cars are developed to the point where a driver does not need to monitor driving, then this app may be appropriate. "

"It looks unanimous among the BrainTrust that this is a bad idea. Great minds think alike."