Are vendors and stores headed for a fight over Amazon? 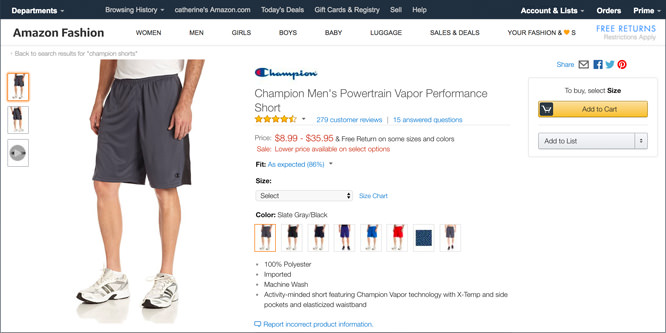 Hanesbrands, the parent of Hanes, Champion, Playtex and a number of other apparel labels, has been aggressively reallocating resources over the last several years to capitalize on retail sales moving from stores to online, but last week acknowledged it’s not been fast enough.

Sales in the fourth quarter missed expectations even though the company saw 28 percent growth in domestic online revenue across channels. On a conference call with analysts, Gerald Evans, CEO, said, “The current scale of our online business was not enough to offset the pressures in U.S. brick-and-mortar.”

Online revenue for Hanesbrands across all channels grew to 11 percent of its domestic sales in the quarter versus eight percent for the full year. Amazon.com became its fifth largest customer in 2016 with sales growing at a “strong double-digit rate.”

Going forward, Hanesbrands will “continue to aggressively follow the consumer.” Assortment will be broadened across online channels and digital will increase to over half of Hanesbrands’ total media spend in 2017.

At the same time Handesbrands will plan more conservatively for its brick & mortar channel activity. Said Mr. Evans, “The shift online is not only pressuring store traffic, but it’s also reshaping traditional shopping patterns as store visits are becoming more concentrated around key promotion events. Therefore, we’re going to be more targeted with our promotions and we’re planning for tighter inventory management at retail.”

Vendors aggressively pursuing online sales may not please retail partners, particularly those with sizeable brick & mortar presences and particularly when much of their efforts are concentrated on serving Amazon.com.

Shares of Autozone, Advance Auto Parts, O’Reilly Automotive and Genuine Parts all fell on January 22 after a New York Post report indicated a number of the largest auto parts suppliers reached deals to distribute through Amazon. Amazon is reportedly paying more to the suppliers while under-pricing the retailers.

“If Amazon is committed … they are definitely going to pick up some share,” Northcoast Research analyst Nick Mitchell told Reuters.

DISCUSSION QUESTIONS: How should vendors manage online growth opportunities when efforts rankle their traditional brick & mortar partners? What options do retailers with sizeable brick & mortar presences have in these situations?

Please practice The RetailWire Golden Rule when submitting your comments.
Braintrust
"My message to the brands: control your own online destiny. Build the infrastructure and skill set in-house to manage your online efforts."

"Gerald Evans is guiding Hanesbrands in the right direction, one that other vendors would do well to mimic — listen to and follow the consumer."

13 Comments on "Are vendors and stores headed for a fight over Amazon?"

Vendors do need to follow the consumer. Can they afford to only prize existing relationships at the expense of their own success?

Consumer attitudes have changed and the changes are permanent. Traditional retailers are holding on to a failed model because of capital investment.

You have to go where the customer is.

What brands should do is control their own selling accounts on Amazon and other sites. Too often they abdicate the management and marketing of these online efforts to others. Ultimately, this leads to a loss of control over how and where the brand is represented and at what retail price.

My message to the brands: control your own online destiny. Build the infrastructure and skill set in-house to manage your online efforts.

Manufacturers need to go where the consumers are, and increasingly consumers are buying online. This means continually taking fresh looks at targeted consumer shopping habits, changing marketing spend and diverting resources to maximize sales. For brick-and-mortar retailers this means doing more to pull consumers into stores by creating shopping experiences, not simply by cutting prices to having promotional events. Change is a constant. Manufacturers need to adapt or become obsolete.

Brick-and-mortar stores have to reevaluate their product and service offerings. If major vendors are reducing their inventory or pulling our entirely, retailers need to recognize they have to change. Offering better in-store experiences, promotions and exclusive products are key. If a vendor is backing out, it’s because their product isn’t doing well in that retail environment. Instead of fighting that change, retailers should get in front of it and figure out what will work better.

Several years ago, a senior Macy’s executive confided in me that Amazon was killing their business. This surprised me as — at the time — the department store model was still hanging in there. He said “you’d be surprised by how much apparel sales are made up by replenishment items — socks, underwear, t-shirts.” Amazon has specifically strong potential in any category where “browsing” is not so important — anything replenishment-related falls into that category, but vendors should take a lesson from the publishing industry and be wary of the easiest path online.

You have to go where the customers are — in today’s marketplace manufacturers are finding it easier to “do it themselves” directly, and you can’t expect manufacturers to be loyal to their retail clients just to be altruistic.

It is, however, a double-edged sword. We’ve written about the pitfalls of working with Amazon, from competition with foreign knock-offs to Amazon itself undermining some manufacturers with its own competitive practices (in 7 Reasons Why A Retailer Like Birkenstock Would Walk Away From Amazon and other posts).

Vendors also need to take control of their in-store presence starting with controlling and managing their in-store inventory. Retail executives believe their inventory accuracy is 95 percent when in fact they are lucky if it is 75 percent accurate. Retail IS A CONSIGNMENT BUSINESS and as such vendors should implement in-store solutions that not only recognize this core truth but leverage it to their, and their customer’s, advantage.

Vendors have to follow the customer, and that increasingly means that they need to invest in online channels. And Amazon is clearly the most important. It is critical, though, that while vendors focus on Amazon, they exert as much effort on other retailers online for two reasons. Online apparel is fragmented and Amazon isn’t as dominant in apparel as it is in many other categories. Second, and most important, it is in vendors’ interest to cultivate strong competitors to Amazon online.

Manufacturers who have resisted online sales or hesitated to distribute through Amazon either have unique products or have only a few more years to be in business. Selling through Amazon is much more complicated than just protecting a relationship with brick-and-mortar retailers. And it gets more complex each day.

Oh, and any manufacturer who thinks their products are not available on Amazon must have been in the other Amazon for the past few years.

Did anyone notice what Walmart.com did last week with their recent acquisition of Jet.com?

Hanes gets it … “Follow the customer.” Where does your customer want to do business? That’s where you go. You can lead them, but it takes a while to get a customer to switch purchasing habits. Brick and mortar retailers must work hard to understand the shift to online and work on their distribution and inventory control accordingly.

Gerald Evans is guiding Hanesbrands in the right direction, one that other vendors would do well to mimic — listen to and follow the consumer. We’re living in a consumer-centric era, more than any other time over the past century.

Gone are the days of brand->marketer->agency->medium->-CRM->retail->consumer model. Evans has the courage to state that fact and shift his own internal organization first.

Put the customer in the center of the wheel. From there, marketers are positioned to better determine the marketing service providers and channel. That model puts every participant in the traditional marketing chain one step away from the customer. Brick & mortar partners should be appreciative of Hanesbrands improved model. Product, retailer, media, CRM, direct to consumer commerce are all winners if they accept this path.

Weaker Retailers and those that are overly invested in the box of a previous generation’s model will be managing from fear and looking in the rear view mirror, instead of keeping their eye on what’s ahead.

Brands can take a page from Amazon and create their own marketplaces where they can invite their retail partners to sell on the brand’s eCommerce site. This creates a new sales channel for retail partners — removing any channel conflict — and ensures a smooth customer experience. The customer can research on the brand’s site, transact on the brand site, and still get the fulfillment and customer service that retailers have provided for so many years. It is a win-win-win.

Braintrust
"My message to the brands: control your own online destiny. Build the infrastructure and skill set in-house to manage your online efforts."

"Gerald Evans is guiding Hanesbrands in the right direction, one that other vendors would do well to mimic — listen to and follow the consumer."