Are wearables on the way out? 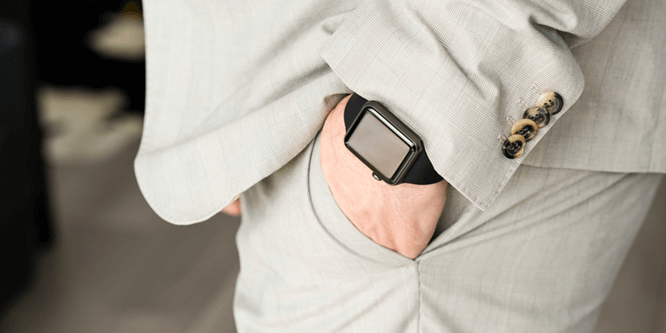 With the success of FitBit and the advent of the Apple Watch, the tech press seems to have taken it as a foregone conclusion that wearable devices are on their way to the same ubiquity as the smartphone before them. But retailers might want to be wary about adopting this conventional wisdom. According to a new study, wearables aren’t trending upwards in popularity the way they were just a year ago.

The rate at which consumers are using wearables is down seven percent from it was last year, according to a new study by Forrester Research, cited by MediaPost. The study, which polled 60,000 adults in the U.S. and 6,000 in Canada, noted that while 35 percent of the biggest segment of wearable users, 28 to 36 year olds, used a wearable last year, only 28 percent reported using one this year. The next younger generation down reported an even greater drop.

The study drives home the fact that no one can really determine the lifecycle of a given device’s popularity. The wearable world has already seen its share of devices that were expected to be big but didn’t quite make the cut with consumers. Most notably Google Glass, which despite the name behind it and the promise of an Augmented Reality experience that fully integrated web usage with daily activity, ended up more of a joke than a must-have piece of technology.

Given the study’s findings, it is not out of the realm of possibility that wearables have reached a saturation point or that certain demographics are finding them less useful than they once did. That’s not to say, though, that wearables are over. Even if the dip in usage by younger users continues and isn’t a one-time anomaly, the Forrester study indicates, according to MediaPost, that users older than 36 are actually using wearables more than in the recent past.

While it has seemed obvious that wearable technology should be aimed at more tech-savvy, younger generations, it might benefit both brands and retailers to give more thought to how wearable technology can address the unique needs of an aging population.

DISCUSSION QUESTIONS: Have retailers and brands overemphasized the importance of wearable technology? How seriously should retailers entertain the notion that wearables will be more popular for older people than younger people as the technology progresses?

Please practice The RetailWire Golden Rule when submitting your comments.
Braintrust
"I'm not giving up on wearables, but I do reject their current definition."

16 Comments on "Are wearables on the way out?"

Wearables have a different trajectory and fill a different need than smartphones. The phones were more groundbreaking, offering mobile computing at a time when most people were chained to desktops for computing needs. Wearables are largely an incremental advancement over mobile and some devices or features require tethering to a mobile device.

Adoption will continue to grow over time but, to date, the killer app for wearables has yet to surface. If one surfaces, it may reignite the market, otherwise as prices drop and small conveniences rise, the market will slowly expand. Until then, they are more targeted to geeks, those with more disposable income, fitness freaks, etc., vs. the general population that mobile serves.

I don’t think there has been an overemphasis. I believe the drop has to do with this generation of wearables being devices that you have to attach to your body, like the fitness trackers on your wrist. The market likely is reaching saturation with these devices. But we are starting to see wearables where the sensors are built-in, to shoes and apparel for instance. This should result in the next spike in demand, and should bring more older generations into the market.

I think the reason that older people are more likely to use wearables is that these same people are accustomed to wearing watches daily. It’s an easy and perhaps beneficial transition.

Younger people don’t wear watches (do they?). They’re used to their smartphones giving them immediate access to apps, information, friends, the time, etc.

I think we have to separate wearable technology in general from the specifics of the Apple Watch and Fitbit-type devices.

I’m not sure why anyone thought there would be a huge market for the Apple Watch. It just doesn’t do enough. And the Fitbit has its advocates, but the market is not in younger folks, it’s in older ones. So, yes, this market may well be rendered interesting mostly to older people.

But it’s early. We’re defining wearables very narrowly. What about a wearable projection screen (for example)? No other screen needed. Or a projected keyboard (save the thumbs!)? The ability to make these types of devices functional is partly based on Moore’s Law and partly based on finding better battery life or power sources.

I’m not giving up on wearables, but I do reject their current definition.

FitBit and the Apple Watch are early iterations of wearable technology. This is just the beginning. Between wearables and IoT (Internet of Things), life as we know it will change. It’s almost as if you can think it — or envision it — it can become realty. There are so many significant ideas coming to fruition, it will be mind blowing, which means huge opportunities for retailers.

My youngest son, who is a tech guru, has no desire to venture into this category, and many of his friends as well do not buy this stuff. If this is the bellwether for the future, then I think it will just be a passing fad. Our cellphones today can monitor miles walked, heart rate and a host of other free apps are part of the monthly service, and why buy expensive clothes, when your smartphone does the same thing? I know I won’t be buying any unless the price drops to match my Kohl’s offers, so we’ll see how this goes.

Wearables are at the beginning of the beginning of customer experience. The handy pedometer, on-device list and “nice to have with you” notes and reminders do not even touch the points of engagement that other screen-media wearables will offer consumers. The “third arm” of the smartphone that takes advantage of free-to-guest Wi-Fi is on its way to the more empowering form factors of glasses and augmented reality. This will be an increasingly important factor for retail success and improving the on-location experience.

My read — somewhat psychic — is that the trendies young and old, jumped on this, ramped it up and we will see a leveling out. Some of the apparel that has embedded technology was spun up fast and is now on sale. The basic step tracking devices bring value to many people — like cutting insurance costs if they walk a certain amount, etc. But wearables overall to me launched on hype, rode the peak and are leveling out. It will drop a bit and then go stable with a few major players. Also, after IoT has its first major hack all of these areas will drop. I myself will not use IoT technology in my home or wallet (the wallet blocks RFID and other readers). The security is not strong enough yet.

Wearables are still strong in certain areas. Take for instance running enthusiasts. I have yet to meet a serious runner who does not have some kind of wearable device to track their progress.

As more specific applications are presented, we will see more usage. It is not a just-for-fun thing. It’s more about purpose.

I am understanding that the initial fascination has worn off. Just like anything new and exciting, the sales arrow points upward for the first few years and then levels off or drops. How many of these devices can we wear? One for a phone, one for exercising and one for whatever else. For my part, I am still old fashioned. I wear a watch and carry a semi-smartphone. The “semi” part is because of the person carrying it.

I blogged about this yesterday. MediaPost reported “U.S. Consumer Wearables Usage Drops 21%”. Quite simply, compelling reasons to wear this tech today don’t yet exist. As longer-term marketplace adoption occurs, retailers will naturally take a piece of that pie.

Wearables may be currently sliding in to the “trough of disillusionment,” however I am bullish on the potential of wearables to deliver greater healthcare benefits and truly enable frictionless living.

The wearables market is in the “test and learn” phase. Companies are still figuring out what can be done with a wearable and what will resonate with consumers. During this phase adoption will wax and wane. Remember, there were fits and starts with PDAs and early smartphones before the iPhone came along and changed everything. The wearables market will shake itself out over the next few years until we get to one or two devices that provide enough utility and a great experience so that hordes of consumers will want them. It’s still an exciting space and it continues to be fun to watch.

Wearables certainly have the potential to be a stronger force for customer behaviour change than they currently are. A recent COLLOQUY study suggests that only 1/3 of those that use a wearable device actually change their behaviour based on the result they are achieving, while 61% of those that thought wearables could be used for better health outcomes felt they were too old to use them. There is a perception because of product positioning that wearables are for younger, hip people who are on the leading edge of technology adoption. As we see, this is not the case. If used effectively by retailers, wearables are the perfect mechanism to better understand customers through user generated data. Offering details on what the customer did and what their intention was in using the device as well as providing real time access and the kind of triggers that are contextual and relevant are key elements of wearables success in retail. Current declines in adoption may be a result of single utility (counting steps but not much else) and… Read more »
0
|
0
-   Share

Perhaps I’m the glass half-full guy in this discussion, but I don’t believe that the white flag should be raised on wearables. Honestly, we are only beginning to see the initial stages of what is sure to be an evolutionary — and revolutionary — change within how we measure, track, monitor, and quantify our health. Having just attended an incredible event in Nashville (anyone interested in the future of technology in healthcare should attend in 2017!), the applications of wearables is merely just emerging. The challenge for the moment is that there has not yet been a breakout moment within this field … but I’m anticipating a game changer on the near-term horizon (I believe there is a “PokemonGo” wearable just around the corner!).

A value proposition is essential for all products. Just because you can create something doesn’t mean you should build it.

Braintrust
"I'm not giving up on wearables, but I do reject their current definition."