Can Amazon dominate apparel with its own private labels? 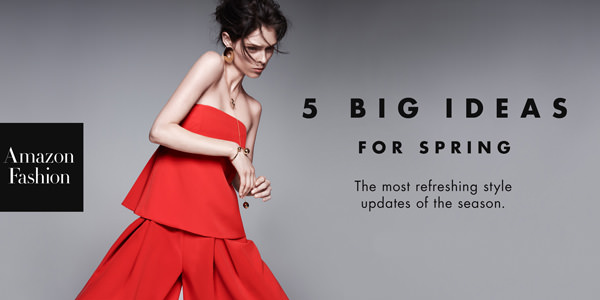 Amazon’s recent success with its private label Amazon Elements line seems to have gotten the e-tailer thinking about where else it can find a win. Over the past six months or so, Amazon’s moves had indicated the company was eyeing the fashion world and intended to launch a private-label apparel brand. Now Quartz reports that Amazon has rolled out its own line of fashion brands, under the radar.

Speculation about the move had been percolating for some time. Earlier in the month, Refinery29, citing an article on WWD, reported that Amazon posted a job listing seeking a senior sourcing manager for the company’s Amazon Fashion Private Label team. The job responsibilities for the position included launching “new high quality products for [Amazon’s] global customers.” The CEO of Amazon’s Shopbop unit, Jeff Yurcisin, envisioned private label clothing lines meeting consumer demand for brands that refused to sell with Amazon, according to an October 2015 Buzzfeed article.

A New York Times article from July 2015 about Amazon’s aspirations at Fashion Week threw light on the challenge. Only seven of the 43 fashion labels with runway presences sold directly through Amazon (with 18 others selling fashion through Amazon subsidiaries like East Dane), according to the article.

Amazon has stated, according to Quartz, that fashion is its quickest growing category. An e-commerce clothing company called Revolve cites house brands as some of its biggest sellers.

But whether people will buy Amazon house brand clothing as replacements for the fashionable brands missing from the e-tailer’s assortment is an open question. Successful house brands in the brick-and-mortar world, such as Target’s Merona and Mossimo lines, are thought of as functional rather than high fashion. Amazon likewise has the reputation of filling functional, not fashionable, needs.

DISCUSSION QUESTIONS: Do you expect Amazon’s private label clothing to catch on with consumers? What branding challenges does the e-tailer face? What will Amazon’s push into the apparel space mean for other retailers?

Please practice The RetailWire Golden Rule when submitting your comments.
Braintrust
"Amazon will need to address the way they organize clothing on their site and would be best served by creating a curated, more easily browsable interface for shoppers to look through."

"If Amazon is successful, it could hurt sales from competitive stores, depending on the quality and design of the line(s)."

"I just don’t see it. It’s a long stretch from data cables to fashion."

13 Comments on "Can Amazon dominate apparel with its own private labels?"

Amazon will need to address the way they organize clothing on their site and would be best served by creating a curated, more easily browsable interface for shoppers to look through. Integration with social media, like Pinterest, would also help introduce shoppers to the idea of Amazon providing fashionable items.

Whether it catches fire is almost immaterial. Amazon is going at traditional brick-and-mortar retail on so many fronts, it must be frustrating for executives in those businesses. Launching private labels is just the most recent example, but expanding into grocery and book retail and probably developing their own shipping and delivery service promises to eat into the already slow/no growth in-store retail is experiencing right now. I could be wrong, but I suspect the brick-and-mortar retailers that will be around and doing well in five years will be hyper-focused on a particular segment as opposed to offering broad general merchandise. I think it will take that level of focus and awesome execution around the shopping experience to do well. Remember, Amazon can fund these activities at a loss for a lot longer than any retailer can and Amazon’s cost structure is a lot more efficient. Just yesterday I saw news that Nordstrom’s online sales were growing but at a loss due to the inefficiencies of servicing that channel given the way they are organized. Resolving… Read more »
0
|
0
-   Share

Building a brand is not an overnight adventure and requires a lot of investment in marketing and product R&D, and more patience than most companies have for that investment. ROI is a long term affair. Having said that there aren’t many companies like Amazon who are willing to take the long view and slowly build a business without the usual requirement for profitability in a reasonable time horizon. So if they do it right and expect returns in the four to five year window, yes they can do it. Any revenue they gain comes as a loss to some other retailers. In fact some of those who will lose out have Amazon stores.

It will catch with some level of shopper. Not sure who yet. Generation Z? Most people I know would not ever wear it — it has a name that does not elicit style. “Got some truck parts and a dress for the wife on Amazon.” Sears did it and hmmm, where are they?

Amazon’s private label clothing line could catch on with consumers if the clothing quality meets consumer expectations for quality and value, whether it’s for functional clothes or higher fashion. If Amazon is successful, it could hurt sales from competitive stores, depending on the quality and design of the line(s).

I just don’t see it. It’s a long stretch from data cables to fashion.

Amazon has a two-decade golden touch in growing its brand and what it offers customers. While there have been a few stumbles along the way, most of their extensions have found a foothold. That said, I think Amazon is going to have some difficulty in creating a private-label fashion line for a few reasons: 1. Manufacturing product is not a core competency, they are experts in selling other brands; 2. Fashion is as much about the halo of the name of the designer as it is about the style/quality of the clothing and Amazon is associated with efficiency and functionality and not design; 3. They will be competing in a fashion industry that has been transformed by e-commerce, but not decimated by e-commerce such as the commodity products of music and books, where their web channel competency can dominate.

I don’t see this happening. Maybe some men will buy because we are not as style-conscious as many women. Women are not going to be boasting about the outfit they bought from Amazon. However, there is a certainty with this: there will not be a problem making the free shipping minimum (LOL). Some things are best left as they are and it is sometimes best not to try to change the world.

I’m certain that even Macy’s would privately admit that their fancy named private-label fashion lines never caught on with customers to the extent they’d hoped. And Macy’s was already known for, and experienced in, merchandising clothing. I’d guess Amazon is not likely to convert a lot of label-conscious fashionistas to a new private-label line. Now maybe if they had a distinct and powerful hook or theme like “Made in America” they’d get some added interest (from North American consumers at least).

Amazon has been performing well for growth in the apparel category over the past three years. The Prosper Monthly Consumer Survey reveals that in March, 2013, 23.8 percent of Amazon Prime members used the Amazon.com website MOST often for apparel shopping vs. 28.4 percent who used the site MOST often in December, 2015. Prime members also increased their loyalty to Amazon for non-apparel during that time, jumping from 54 percent to 59.4 percent. Prime Members certainly grew during that time span. However, among Amazon shoppers over choosing the Amazon.com website MOST often has remained flat to slightly down. Other retailers have been battling back, particularly in the non-apparel arena. Amazon.com has picked up the pace with Millennials choosing the website MOST often for apparel, rising from 16.4 percent to 23.8 percent of Millennials during those three years. Amazon’s private-label clothing will hold value within the ready-to-wear space. However, with department store shoppers they will face increased competition and focus of those merchants to retail their share both via in-store and online. Nordstrom, Macy’s, J.C. Penney… Read more »
0
|
0
-   Share

I am probably in the minority by not being a fan or customer of Amazon. That being said, I would not bet against them finding their place in the space. There seems to be room in the functional value space, where Old Navy and GAP play. If they get quality, sizing and value right and you need some casual shorts, shirts or khakis, why not buy from them?

This is not in Amazon’s wheelhouse. I have supported many of their ventures, but this one? Not so much!

Here’s one thing about Amazon we can all agree on: they have a great PR team. I’d bet that less than a quarter of all the press that Amazon gets actually comes to light. 400 bookstores, grocery BOPIS stations, drones, ubiquitous lockers, Uber delivery, and now fashion. Do you know how hard “fashion” is to do? No matter. Here we are talking about Amazon and fashion in the same breath.

And THAT … is good PR. Nice work, Amazon PR.

Braintrust
"Amazon will need to address the way they organize clothing on their site and would be best served by creating a curated, more easily browsable interface for shoppers to look through."

"If Amazon is successful, it could hurt sales from competitive stores, depending on the quality and design of the line(s)."

"I just don’t see it. It’s a long stretch from data cables to fashion."