Can American Apparel’s ‘Made in U.S.A.’ model survive bankruptcy? 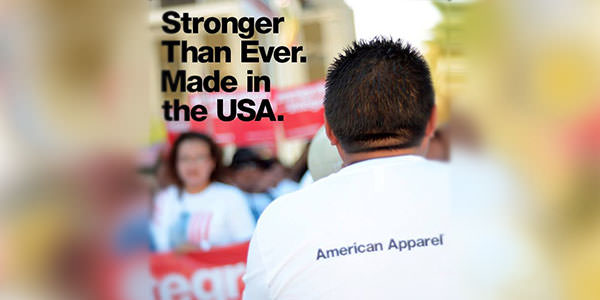 American Apparel has maintained a "Made in U.S.A." focus for all of its 15-year history, but its step into bankruptcy proceedings in early October poses risks to its 4,600 factory workers in Los Angeles.

After the filing, CEO Paula Schneider said management had no plans to move manufacturing operations to offshore locations.

"That’s what makes us a really important company and a company that needs to thrive and be saved," Ms. Schneider said.

Despite some small signs of apparel manufacturing returning to the U.S., the American-made model is under threat from several directions.

"There is too much emphasis being placed in having things made in America," Lloyd Greif, CEO of investment banking firm Greif & Co., told the Los Angeles Times.

"It costs way too much money," added Josh Arnold, an equities analyst and contributor to financial site Seeking Alpha.

But it’s not as though American Apparel factory workers in California are highly paid.

The workers, primarily sewers, averaged about $12 an hour in recent years. After production slowed down this year, several workers said they are earning closer to $9 an hour — California’s ‘s current minimum wage. That would translate into pay of about $1,440 per month for a full-time employee.

But those lowly hourly wages compare to perhaps the equivalent of $68 per month in Bangladesh or $90 per month in Vietnam, both major apparel producers. And unfortunately for American Apparel, the minimum wage in Los Angeles is scheduled to go much higher, rising in increments to $15 per hour by 2020.

One possible path out for American Apparel, industry experts say, is to move production from Los Angeles, but keep it in the U.S., perhaps in the Southeast, where in many states the minimum wage is still just $7.25 per hour.

Evan Clark, deputy editor of Women’s Wear Daily, thinks there is still some hope for American Apparel manufacturing in the U.S., but it will have to thread the market needle to do so.

"I think Millennials are very conscious of social issues and being environmentally friendly and all of that," Mr. Clark told NPR. "So I think made in the U.S.A. ethos resonates very much with that population. But the consumers seem to mostly make their decisions based on style and cost. So if you’re making it in the United States, the path would seem to be kind of get the styling right or get the timeliness. You need to somehow compensate for the cost factor in there."

Please practice The RetailWire Golden Rule when submitting your comments.
Braintrust
"What American Apparel really needs is a few creative merchants and product designers. The dynamic of fast fashion is about getting product in and out of stores quickly."

"I agree with Evan Clark. There is a market for products made in the U.S., but the majority of consumers are conditioned to be more loyal to price than ethics."

"I mean, it IS the name of the business. You know though, as a side note, this is a classic case of a good 50 store concept being pushed to proliferation for purely financial (exploitative) reasons that is now paying the price for being at least 5X bigger than it should be."

9 Comments on "Can American Apparel’s ‘Made in U.S.A.’ model survive bankruptcy?"

The reason why American Apparel has an opportunity to succeed is exactly its model of sourcing close to the point of demand. This is what fast fashion is all about, and it’s also the reason that companies like H&M and Zara are knocking the cover off the ball at the expense of department stores. What American Apparel really needs is a few creative merchants and product designers. The dynamic of fast fashion is about getting product in and out of stores quickly. The brand can place smaller bets because it’s not sending big slugs of product on a month-long journey. Mistakes are minimized. If it costs a few bucks extra to get it in, it’ll get made up in turn and fewer markdowns. The sourcing of product far from the point of demand creates a set of decisions that are not good: 1) big bets which are generally made on 2) safe products. The net of that is boring product, and that’s why sales can languish. No merchant is that good that they can or… Read more »
0
|
0
-   Share

Made in the U.S.A. is vital to American Apparel, but it needs to stand for quality, not just point of origin. American Apparel does not have to rush towards lowest price to be successful. It needs to deliver quality goods at a fair price point while retaining its Made in the U.S.A. point of differentiation. Don’t listen to Wall Street. After all, these are the same geniuses that gave us the Great Recession. Instead, focus on quality and stay on message.

I agree with Evan Clark. There is a market for products made in the U.S., but the majority of consumers are conditioned to be more loyal to price than ethics. If all factors were the same it would be an easy argument to buy American, but substantial price differences are going to make it a tough row to hoe.

No surprise though that an investment banker is a complete sellout on the issue of “Made in America.”

This is a no-win situation for American Apparel. I love the fact that they want production to stay in the U.S., but financially with much higher wages plus ACA and regulation burdens, it is very difficult to produce a clothing item for the mainstream consumers. Niche clothing that creates very trendy items and custom shirt and suit makers have a good chance at success if their clothing resonates with the higher income crowd.Walmart’s success is built on cheap products, from ties to home appliances, and undersells American goods all day long. Turning this trend around requires very bold thinking, which in D.C. is not happening. We have trillions of dollars parked overseas, and there is a way to bring it back without any penalties or taxes for starters. Is the country ready for a new manufacturing revolution? I hope so, as manufacturing in the U.S. could and should happen again. My solution is simple: Create a partnership with workers on new facilities using an ESOP plan to get the employees some skin in the game.… Read more »
0
|
0
-   Share

As always the question we see in this discussion points to labor as the cause for higher costs of goods sold which are American made. Many manufacturing companies have farmed out the legal limits of labor simply to keep the “Made in U.S.A.” tags. What we are left with is product which can not be made in the U.S. if need arises. Again we are headed into a pointless argument that can never lead to solutions for easy earning needs versus earning a profit. Since the dawn of written history economies have looked to production cost increases as a factor of labor only. There are few that look to any of the other contributors in LOHM G&A’s burden and responsibilities. Should companies consider alternatives to buying or engaging in long term facilities leases? Can we be so bold as to look to outsourcing the responsibilities of “C something or other Os” by passing the ownership jobs back to ownership and/or the board of directors? And what about making the same things our ancestors wore the… Read more »
0
|
0
-   Share

Made in the U.S. or not, their stores need to look and be executed a whole lot better if this is going to work. The last few I saw looked like bargain bins. That’s no way to try to sell the message of better quality.

Will people pay more for an item? Of course. That’s proven all the time. Not everything is price sensitive. But, to get more you have to deliver quality on every front. Unfortunately, American Apparel isn’t delivering it at all.

I mean, it IS the name of the business, at least in reference and history. You know though, as a side note, this is a classic case of a good 50 store concept being pushed to proliferation for purely financial (exploitative) reasons that is now paying the price for being at least 5X bigger than it should be. It’s the same boat most physical retailers are in now; past growth figures to The Street driven by increased store numbers vs comp growth. The opposite of the slow growers like Container Store, Trader Joe’s or Whole Foods, which are growth models based on demand.

I honestly think that A) there should only be 50 AA stores and with that, B) they should keep the Made in USA dictum. It is, after all, a pretty big differentiator that with the stores right-sized, would be very do-able.

If you had to file bankruptcy “Made in U.S.A.” hurt more than it helped. It’s well meaning but unrealistic in the apparel business. American Apparel needs to offer something more compelling than a country of origin tag. We don’t buy our bananas that way so why should be buy our clothes that way? It doesn’t make economic sense. That’s probably a good thing. In order to compete we would have to eliminate minimum wage, entitlements and corporate taxation. Our standard of living would then take a step backwards.

Braintrust
"What American Apparel really needs is a few creative merchants and product designers. The dynamic of fast fashion is about getting product in and out of stores quickly."

"I agree with Evan Clark. There is a market for products made in the U.S., but the majority of consumers are conditioned to be more loyal to price than ethics."

"I mean, it IS the name of the business. You know though, as a side note, this is a classic case of a good 50 store concept being pushed to proliferation for purely financial (exploitative) reasons that is now paying the price for being at least 5X bigger than it should be."