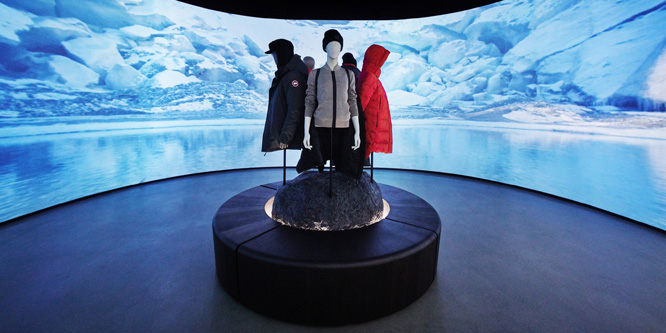 Canada Goose has opened a store without inventory to leave room to create an Arctic adventure.

Visitors enter “The Journey” at CF Sherway Gardens in Toronto to first experience “The Crevasse,” a dimly-lit path with walls made to look and feel like stone. When visitors step on the OLED glass floor panels they “hear the sound of ice cracking beneath their feet, inviting them to leave the outside world behind,” according to Canada Goose’s statement.

Next, visitors encounter the “The Elements Room” where 4K laser devices in the ceiling project seasonal nature films shot in British Columbia onto a 60-foot curved wall, according to CNBC. In the middle of the room, Snow Mantra parkas displayed on mannequins feature interactive “hotspots,” allowing customers to explore specific functions and features.

Guests then head to the “The Cold Room,” where they try on jackets in temperatures reaching as low as negative 4 degrees Fahrenheit. Cold rooms were introduced to some of the brand’s stores last year, but the Toronto location is the only one to feature snow.

Two original films are projected onto the walls in the cold room, narrated by Iditarod champion, Lance Mackey, and Indigenous activist and artist, Sarain Fox. The films will change seasonally.

Finally, guests enter an area where they can speak with associates, get their questions answered and place orders at kiosks. Products purchased before 1:30 p.m. will be delivered the same day to consumers staying or living in the Greater Toronto Area.

“In retail, experience is everything — and trying on a Canada Goose jacket for the first time is a powerful experience,” said Dani Reiss, president and CEO. “This new store amplifies that moment by creating an environment that digitally and physically transports people into the Arctic in innovative, surprising, and inspiring ways.”

Bonobos’ Guideshops and Nordstrom Local are among the few inventory-less showrooms, but many retailers are adding experiential elements to their locations to support storytelling and differentiate from online selling.

Markus Giesler, an associate professor of marketing at York University’s Schulich School of Business, told Bloomberg that one risk with experiential initiatives is the expectation that the response will keep rising. “Consumers get easily bored,” said Mr. Giesler.

DISCUSSION QUESTIONS: Is the expansion potential of a hyper-experiential/inventory-less concept such as Canada Goose’s “The Journey” likely limited to a few showcase locations or does it suggest broader initiatives for retailing? What obstacles do you see in bringing such a concept to four-wall profitability?

Please practice The RetailWire Golden Rule when submitting your comments.
Braintrust
"What a destination!"

"This all sounds very fun, and theatrical, and — experiential. But I would love to see the math."

Canada Goose has created an experience to allow shoppers to experience environments where its clothing is applicable. By the time they have wandered through the various areas, especially the cold room, they are primed to be converted from shoppers to buyers.

The question yet to be answered is if Canada Goose will earn a return on its investment (not counting the publicity it has and will continue to receive). That may be hard to measure because some of the people may elect to purchase one of their products after leaving the store.

I absolutely love this. The ultimate in “try before you buy.” The model has a lot of benefits in terms of minimizing overall inventory because they can ship to customers from a central inventory location. Given the variety of products and sizes combined with the product value this could be a huge point of saving for the retailer. Difficulties could be around how they deal with the new fulfillment model and ensure customers are kept up to date as to where their product is once ordered.

Canada Goose has a powerful brand that allows it to create these experiences. However, this concept is not suitable for all brands and retailers. Nor is it something that can be put in all locations: the cost is prohibitively high. However, in a diluted format, there are lessons that all retailers can learn. For most retailers in the mid-market and beyond, stores have to be more than places where transactions can be made. They are there to inspire and drive trade in other channels.

How can you not get excited about such new retail concepts and formats! Canada Goose has figured out how to blend product, brand and experience into a powerful retail concept that transcends traditional channel thinking. By combining in-person exploration and creative settings, Canada Goose ignites the imagination and elevates the brand cachet. This is inspiring and is part of a larger cross channel experience that is focused on the customer and how they experience Canada Goose. Brilliant!

This all sounds very fun, and theatrical, and — experiential. But I would love to see the math. The logistics and expense of same-day delivery on orders taken before 1:30 sound daunting. And it’s not like Toronto needs a cold room to teach people about cold. I totally agree that brick-and-mortar will succeed by offering sensory experiences that are literally impossible to offer on a screen of any size. But, it’s winter. It’s Toronto. It’s COLD outside. Come inside and visit our cold room. Sorry, no inventory. I applaud what Canada Goose is doing, but it seems like there is another evolutionary step or two to be taken.

Many customers like the idea of experiential shopping, especially for Canada Goose where temperature has a lot to do with selecting the right outerwear. The shoppers that go through the Canada Goose experience are probably more committed than usual to buying the products they select. Having said that, creating the experience cannot be cheap, and the shopper must come to the location for the experience. These are two of the problems with experiential selling, the third being the shopper has to wait for delivery of their purchase by mail or delivery service.

This reminds me of the Circle-Vision 360 O Canada experience at Disney’s Epcot Center. The Canada Goose Arctic Experience is cool. Literally!

Generally, inventory-less stores remove a critical (the most critical?) feature of an in-store shopping experience. If shoppers can’t buy what they want now, they’ll just get it online. And if they truly need it now, they’ll head to a well-stocked competitor. Travelers and luxury shoppers are particularly reluctant to put up with even the slightest inconvenience or delay. I’m not sure that the concept is working for Bonobos and I don’t think Nordstrom Local is an apt comparison.

That said, Canada Goose’s product and brand lends itself to this experiential concept. The fact that users can test merchandise against low temperatures is outstanding. That shoppers can get the merchandise the same day is incredible and should help them overcome the aforementioned concerns.

For many travelers, trying to stuff a Canada Goose into a suitcase would be daunting. In this case, “we’ll ship it to you” would be a positive in avoiding baggage fees and hassle at the airport!

The legacy pre-digital strategy of running the retail space operations simply to sell products and services has passed us by, as we are now living in a channel-less world. With that said, customers are still flocking to the stores, showrooms, and pop-up shops. Canada Goose is taking a bold step to reimagine what the retail experiential space could be, without the inherent pressures of hitting sales and margin targets.

This will quickly become a must-see destination, and will clearly prop up the brand in ways that are not possible via strictly digital channels.

Braintrust
"What a destination!"

"This all sounds very fun, and theatrical, and — experiential. But I would love to see the math."