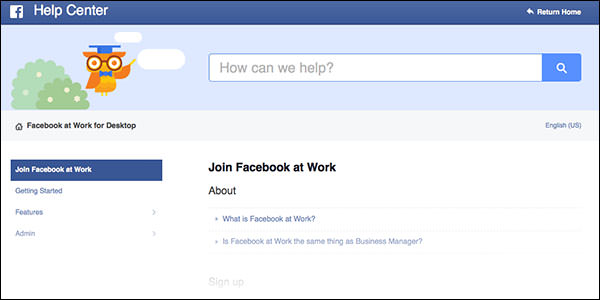 In mid-February, Canadian Tire became the first Canadian retailer and second largest company in the world to launch Facebook at Work for its employees. Launched without much fanfare late last year, Facebook at Work lets businesses create their own social networks among their employees that are built to look and act like Facebook itself.

Designed for mobile, Facebook at Work enables employees “to check in on news and collaborate from the office or while on the go,” according to a statement. Common Facebook functions such as posting, sharing, commenting, images, messenger, video and video chat are all available. Separate from a consumer Facebook profile, data shared on Facebook at Work is secured within the company’s network.

“It is a true game changer and has created an online space where we can tap into each other’s ideas and knowledge and get information faster regardless of location, department or level,” said Michael Medline, Canadian Tire’s president and CEO, on the company’s recent conference call with analysts.

Facebook at Work will compete with Microsoft’s Yammer, Slack, Convo, Socialcast, and countless others in the “enterprise social network” space. Other majors include Google, which enables employees to share documents and data; as well as LinkedIn and Salesforce.com.

Like others, a big challenge for Facebook at Work is enabling workers to use it without disrupting their everyday workflow. It also has to prove itself as an improvement over e-mail.

Julien Codorniou, director of global platform partnerships for Facebook at Work, told The Wall Street Journal that e-mail is “an inherently top-down method of communication meant for broadcasting information as opposed to exchanging it.”

What Facebook at Work has going for it is that no enterprise social software tool has widely gained traction and its familiarity with Facebook users.

“If somebody comes into the company, they know how to use this tool from day one,” Ryan Holmes, CEO of Hootsuite, told re/code.

DISCUSSION QUESTIONS: What do you think of Facebook at Work for retailers? Why haven’t enterprise social software tools been embraced by businesses overall?

Please practice The RetailWire Golden Rule when submitting your comments.
Braintrust
"Possibly, these tools are slow to catch on because of management’s concerns about misuse or distraction. If so, any tool with the word Facebook in the name might create concerns for company leadership."

"Facebook is a huge time sink. It was built that way to keep people on the site. If the same feature set is available, it may become a social site at work and just drain employee productivity."

That being said, Slack is really wonderful and generally silo-ed from distractions. Facebook for Work is going to provide too much of a temptation to jump into Facebook personal.

This or other social business tools may have the best home in retail, so long as it doesn’t get used out of control. Retailers, especially large chains, are primarily composed of lower-tier employees — management and middle-management are just a fraction of the entire workforce. Typically, lower-tier workers don’t wield much authority or have much say, but a carefully utilized social tool can be leveraged to communicate ideas, empower workers and even identify those worthy of management training opportunities. It can be a form of team building and demonstrate management’s trust.

Possibly, these tools are slow to catch on because of management’s concerns about misuse or distraction. If so, any tool with the word Facebook in the name might create concerns for company leadership.

Facebook is a huge time sink. It was built that way to keep people on the site. If the same feature set is available, it may become a social site at work and just drain employee productivity. It is going to require careful monitoring and policing to make this work.

When I was a consultant I worked with a digital agency that was making a workplace social network — it didn’t end up succeeding and I observed two major problems that I expect apply to most failed enterprise social projects: First, everyone thought they knew how to design a social network. There were skilled UX professionals hired, but in meetings business-side leaders who’d never designed software in their life would drown them out with their own ideas. They felt that their experience using Facebook every day at home was enough for them to contribute to, and in many cases control the design process. Wrong — the design was disjointed, internally inconsistent and riddled with sacred cows. It turns out that merely using a complex technology product is not sufficient experience to design one. 😉 Second, the project was a waterfall. They decided to determine the ideal feature set, with all the bells and whistles, in meetings and on whiteboards, and then build the entire thing before letting any of the endusers into it. This is risky with… Read more »
0
|
0
-   Share

Slack is better but it requires more motivation to become part of the culture.

People are already trained to go to Facebook when they want to check out. With Facebook at Work, the destination that they’ll go to when the: “I think I’ll check Facebook” feeling overwhelms them will not be a page with LOLcats posts, it will be a page about a LOL distribution center … with a business twist. Practice your karaoke, or perhaps a cover of Strawberry Fields:

Anytime you can enhance the experience for your employees is an opportunity to create more engaged employees. This will be embraced by many employees. And happy employees means (potentially) happy customers.

Many companies have embraced similar “intranet” programs that are similar to Facebook at Work. Those that have, know the benefits.

This is a unique perspective, but the exchange of ideas and improved communication might be better done through phone calls and face-to-face chats. Encouraging social Facebook at Work-style communications is also encouraging employees to disrupt workflow and “chat” whenever they feel like it. This has to have negative impact on performance and workflow.

Having a social platform like Facebook at Work can work in one of two ways. It will either bring your staff closer together, making them feel at home among their coworkers or, if everything doesn’t go according to plan and someone abuses the privilege, it could create a hostile and uncomfortable medium that may drive your staff apart. It’s important to weigh both the benefits and the costs when implementing a platform like Facebook at Work. Do your employees feel they need a digital platform to collaborate and grow closer with one another? Do you feel it will increase overall morale at your company? Have you mapped out some ground rules that will prevent abuse on the site? The fear of what could go wrong is likely why more social software tools haven’t been embraced by the business community. Technology today enables people from all corners of the world to communicate with the touch of a button. If you feel your employees need an additional private platform to connect and collaborate then weigh the pros… Read more »
0
|
0
-   Share

Braintrust
"Possibly, these tools are slow to catch on because of management’s concerns about misuse or distraction. If so, any tool with the word Facebook in the name might create concerns for company leadership."

"Facebook is a huge time sink. It was built that way to keep people on the site. If the same feature set is available, it may become a social site at work and just drain employee productivity."