Chewy gains customers and increases sales, but will it ever be profitable? 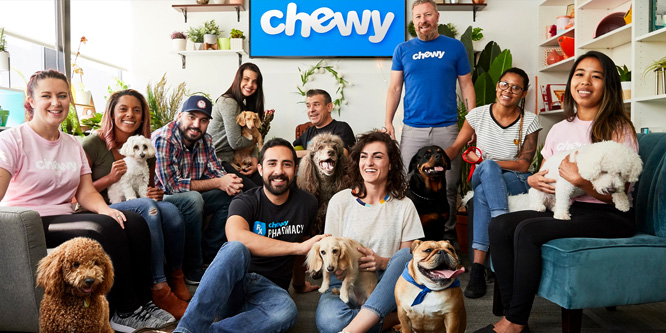 Chewy.com, the pet products e-tailer, posted a 43 percent gain in net sales year-over-year during the second quarter. The company also reported that its active customer base grew to 12 million during the quarter, 39 percent higher than this time last year. Chewy also managed to cut its adjusted loss to 10 cents a share, a penny better than Wall Street’s expectations. All in all, the numbers look encouraging for Chewy, even as its share price fell slightly on its earnings announcement.

CEO Sumit Singh told CNBC that he sees a big upside for Chewy. “We’re playing in a very large market size, $70 billion,” said Mr. Singh. “I’d also point to the fact that it’s the early days for e-commerce. [The company is] 14 percent penetrated but we believe this number could be 25 percent or 30 percent in the next few years.”

Mr. Singh also said that Chewy is currently capturing about 40 percent of its customers’ spending, a percentage that he believes can be improved by building on the e-tailer’s customer service strengths and by moving into new areas, such as pet pharmacy.

“We continue to invest in product and business innovation that will make it easier for pet parents to shop our Chewy Pharmacy and veterinarians to partner with us, including tools targeted specifically at improving the vet experience,” said Mr. Singh on an earnings call with analysts yesterday. “Our newly launched RxManager is continuing to help customers better manage their pet’s prescription diets and medications in a streamlined manner making compliance and record keeping easier for pet parents, and we continue to evolve this product to provide similar convenience to the vet community in the future.”

Making the shopping experience easier and more enjoyable for “pet parents” is central to Chewy’s mission. The company recently broke ground on its ninth fulfillment center to enable even quicker deliveries. Chewy management has been encouraged with the continuing popularity of auto-ship, which now accounts for 69.3 percent of its sales.

Chewy, which was spun off by PetSmart to pursue its initial public offering in June, does not currently appear to be moving into brick and mortar retail. The e-tailer, at least for now, is bucking a trend that has seen more and more consumer direct brands and retailers opening stores.

Everlane CEO Michael Preysman, who said in a 2012 interview that he would rather “shut the company down” before opening a store, told CNBC last week that one of the industry’s dirty secrets is that online-only companies are not profitable.

DISCUSSION QUESTIONS: Is Chewy.com on a path to becoming profitable? What do you see as the biggest opportunities and challenges facing Chewy as it seeks to profitably grow its share of the pet products market?

Please practice The RetailWire Golden Rule when submitting your comments.
Braintrust
"If profitability is the most important metric (it is), I see a tough road ahead for Chewy."

"If enough customers become loyal to the brand, talk it up, and Chewy can continue to grow its audience, then they have a shot of being successful. "

"It’s a risky growth model to hope that volume will eventually morph into profits."

12 Comments on "Chewy gains customers and increases sales, but will it ever be profitable?"

Chewy is not a value play, it is a convenience play. Having lower prices than anyone else removes your wonderful customer service and ease of purchase, losing that means lugging a 40 pound bag of dog food from you car to your home. Raise the prices to be able to do more to become an upscale pet food delivery service.

I think I like your answer but I don’t know if they will stay in business if their prices are higher than others.

Enough people will pay for their culture, service and curated products. Those who don’t will shop elsewhere. On a side note, it’s about time we stop calling people entrepreneurs who can burn through billions of VC and stock money like Uber, Chewy, etc. yet never make a profit with a business.

Just yesterday a friend was talking about ordering groceries from Walmart, including giant bags of dog food and kitty litter. The prices were good and the heavy bags were brought into her home for her. Chewy can’t do that, at least right now.

Like a lot of online retailers, Chewy has no problem in driving up sales and generating impressive revenue growth. However the cost of servicing those sales is high. I accept the fact that Chewy can secure a large share of wallet and that it can move into other areas, such as pharmacy. However I am not entirely convinced that these represent a sustained path to profitability – especially in a market that remains highly competitive.

It’s hard to say at this time how successful Chewy will be in the future. As the article states, it needs to increase its market share. On paper it has the potential, but what is on paper doesn’t necessarily happen in the business world. If enough customers become loyal to the brand, talk it up, and Chewy can continue to grow its audience, then they have a shot of being successful. Equally important, they will need to keep their costs down so they can also remain profitable. There are many “ifs” and only time will tell if the public will buy into the Chewy concept and if the company can find a strong enough audience that will keep them successfully in business.

I have had excellent experiences with Chewy. Their customer service is as good as Zappos who many believe to provide superior service. There is very little Chewy will not do to satisfy their customers. If you order something and decide later you do not need it, they tell you to keep it or give it to someone who might be able to use it.

As to the question of profitability, I defer to their CEO who believes they are on the right path. It might be another year or maybe two; but they will get there. My guess is they are going to be sought after to be purchased sooner than later.

We we recently had a similar discussion about how expensive it is to operate a pure-play e-commerce website today. The state of the industry reflects both the laws of the free market and open competition, and self-inflicted wounds by the retailers. The point of differentiation between websites is going to have to be ease of use and navigation and possibly an optimized product assortment. Retailers are killing each other on price, shipping for free and accepting non-resealable returns. They cannot make money that way. They may increase revenues but not profits. Every touch of the product is a cost. If they spend more than they make, they will be gone eventually. So it appears the pure-play retailers can make money if they raise prices some, do not ship for free, and implement tighter policy on returns, but offer the customer something else in the place of that: ease of navigation and purchase, and the right products.

If profitability is the most important metric (it is), I see a tough road ahead for Chewy. Shipping costs alone for a good percentage of their product will make it very difficult to make any margin. Pharmacy is a good move but it will never reach the volume of dog food and cat food. Perhaps a subscription service like BarkBox would add value but for a pure convenience play, I don’t see a path to profitability.

Chewy lost a significant advantage when PetSmart spun it off. The combination of local brick-and-mortar stores and Chewy’s brand appeal made for what could have been an unbeatable combination of the two channels. Now Chewy is just one of many online sellers in a price war with no clear differentiation.

Apparently “The Street” thinks they will be profitable, or they wouldn’t be doing their IPO. The best opportunity for Chewy.com will be their subscription service. To get all those pet parents on a recurring revenue model (subscription model) will mean long-term financial stability.

Chewy is investing heavily in growing market share – I get promotional direct mail from them regularly! It’s a risky growth model to hope that volume will eventually morph into profits.

Braintrust
"If profitability is the most important metric (it is), I see a tough road ahead for Chewy."

"If enough customers become loyal to the brand, talk it up, and Chewy can continue to grow its audience, then they have a shot of being successful. "

"It’s a risky growth model to hope that volume will eventually morph into profits."