Costco to build a chicken coop 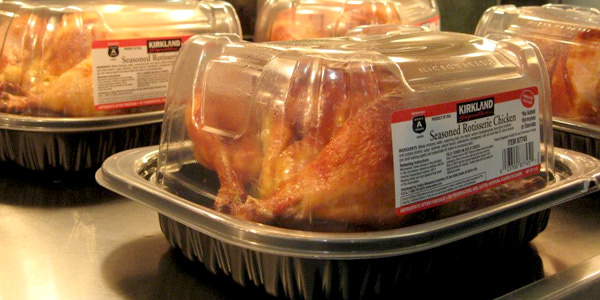 Costco is looking to build a poultry processing plant in Nebraska with the aim of gaining greater control over its food supply chain.

Domestically, Costco sells 60 million of its $4.99 rotisserie chickens per year. The new plant is expected to supply a third of its fresh chicken needs when it reaches full production in 2019.

The plant will boost chicken margins by reducing wasteful and costly overproduction.

“Most plants can have up to 300 items they produce to please all their customers. This is a purpose built plant that will produce 18 SKUs for us. This gives us the chance to be very efficient,” Jeffrey Lyons, Costco’s SVP merchandising – Fresh Foods, told Forbes.

Costco plans to buy 300,000 bushels of corn and 3,000 tons of soybean meal per week from local providers, according to a press release from the Greater Fremont Development Council, a local public/private partnership in Nebraska.

The factory, which needs local approval, promises to create roughly 1,100 jobs and investments of $180 million in the region. Georgia-based Lincoln Premium will operate the poultry farm. Costco will retain its partnership with Pilgrim’s Pride Corp., which currently produces chickens for Costco in Alabama.

A Seattle Times article from early April noted that Costco has already made investments to shore up its organic food supply. Beyond the Alabama chicken plant, Costco partnered with a Mexican vendor to secure wild shrimp from the Sea of Cortez. It has also bought cattle and is contracting with owners of organic fields in Nebraska.

Mr. Lyons told the Seattle Times the initiatives are based on two questions: “What do we see down the road that could be a challenge in terms of supply? And what can we put in place today to grow that particular scarce resource?”

DISCUSSION QUESTIONS:
Does it make sense for Costco to build a poultry processing plant? What are the pros and cons of such moves by retailers to take greater control of the food supply chain?

"This kind of vertical integration is the next wave of food retailing, especially for value shoppers."

"The food safety issue alone makes this a good idea for Costco. The recent troubles that Chipotle has suffered make controlling your supply chain a big concern for retailers."

12 Comments on "Costco to build a chicken coop"

The problem is that no one wants a chicken coop in their backyard!

I live in Nebraska. The original proposed location is very near my home town. While convenient for producers, local home owners are rightfully concerned.

The backstory of this venture involves a lot of events that weren’t exactly transparent to local citizens. What is often missed in the story is that a “plant” means confining thousands of chickens to raise them cost-effectively. There are most certainly issues to being downwind from such a plant.

Costco gets kudos for looking at ways to cost-effectively produce fresh food closer to where it is consumed. But Costco or the people handling the site procurement need some basic training in public relations.

There is increasing consumer awareness about the quality of food they eat. Transparency on food source, conditions and quality will be a major differentiator in the future. The best solutions will be derived from establishing relationships with local farms and producers.

H-E-B owns their own shrimp boats. Some grocery chains own their own dairy. Wegmans closed their egg farm after a leaked video. Of course the pros are saving money and having control over the quality. The cons are taking the heat if PETA finds out those chickens are not being treated like pets.

If Costco can insure quality and meet customer standards, the chicken plant makes sense. In the west, Costco has been caught up in the Foster Farms recalls (their current chicken supplier). This hurt Costco’s image and sales. As a consumer, I trust Costco more than Foster Farms to deliver on its promise of quality. My only concern is whether bringing chickens from Nebraska versus chickens from California will impact freshness and quality.

There are certainly efficiency advantages when producing 18 versus 300 items in a plant. The vertical integration provides additional potential saving and increases surety of supply. It also increases Costco’s exposure should something go wrong. It is one thing to blame your supplier but quite another when the issue occurred at you own plant.

This kind of vertical integration is the next wave of food retailing, especially for value shoppers. We are seeing other food retailers like AHOLD embracing the trend by partnering with organic farmers like BrightFarms, which supplies their produce in several states. This move gives them control over quality claims to differentiate them from competitors, as well as savings on margins.

There are many changes driving this vertical integration trend: grocery margins are getting squeezed, Amazon is picking off categories, farmer’s markets are encroaching and grocerants are stealing more at-home meal occasions.

The future may hold that food retailers and Big Agra make joint partnerships.

This has only been going on for 100 years. File this right along with Amazon’s purchase of a fleet of airplanes to support its own deliveries. Retailing is the largest industry in the world, and it has repeatedly made sense over the past century for retailers to supply themselves. Do they sometimes stumble? For sure. Do their third-party suppliers ever stumble? I think the real shock here is how the world of brick-and-mortar retailing is still almost oblivious to what is going on around the world. I don’t create rankings myself, but I have seen industry reports of Costco being number two in global retail, after Walmart. I don’t know the number of times when pointing out something to a retail audience, I get a response to some observation more or less along the line, “Well, we don’t do OUR business that way!” Well, get a clue. Have you checked what is happening to the businesses doing it “your way?” You think you are impervious to the hard scientific facts of reality, because SOME who… Read more »
0
|
0
-   Share

The food safety issue alone makes this a good idea for Costco. The recent troubles that Chipotle has suffered make controlling your supply chain a big concern for retailers. What better way than to control an SKU that is extremely important to your image as well as your bottom line?

This is a great move and focus for Costco in order to better manage costs, bring a secure channel of supply to its stores, and better control the quality of products which are being brought to market as Costco moves towards a direct to market model.

Given Costco’s volume, probably yes. For the average vendor, for the same reason — volume — probably not.

The pros/cons are always pretty much the same. The possibility of lower costs — again qualified by sufficient volume — and greater control, vs. trying to do something outside your area of expertise.

Purely from a quality control and cost control perspective, owning rotisserie chicken production seems like a smart move for Costco. But as David points out, there’s a potential downside in a new “chicken processing plant” built to raise birds in a concentrated factory environment. Is Costco overlooking an opportunity to meet a growing demand for ethically raised poultry?

Costco customers already show a significant interest in organic products (as evidenced by numerous merchandise offerings visible in its stores). Pasture-raised, hormone-and-antibiotic-free chickens have potential to bring in higher margins and create another significant point of difference that could be a major trip-driver. This is curiously absent from the messaging I see so far.

If Costco receives less than excellent ratings from government inspections or suffers from some sort of salmonella something or other, the ramifications will certainly reflect on their consumer confidence levels. Saving money on operations costs can be far more expensive than they anticipate. In times like these companies should stick to what they do best for safety sake.

The main pros are quality control and cost savings, but theres always a risk when delving into an area where you don’t traditionally have expertise in.

As a side note, this is interesting, as vertical integration across the retail industry appears to be growing in general (not just the food supply chain) — for example, more retailers moving into private label manufacturing, or manufacturers moving into B2C, etc.

"This kind of vertical integration is the next wave of food retailing, especially for value shoppers."

"The food safety issue alone makes this a good idea for Costco. The recent troubles that Chipotle has suffered make controlling your supply chain a big concern for retailers."