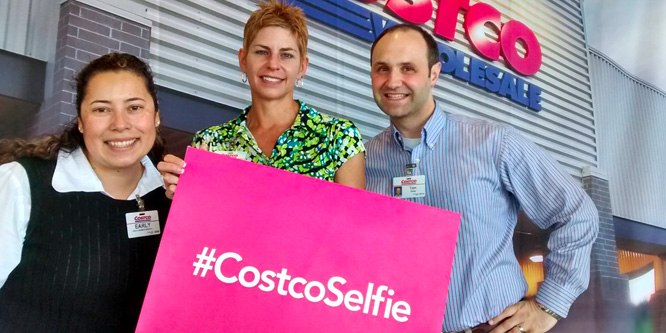 Costco has long been held up as one of the best employers in the retailing industry. Last week’s announcement that Costco planned to raise its starting wage by $1 an hour while bumping up the hourly rate it pays other workers between 25 and 50 cents an hour, won’t hurt its reputation either.

Beginning on June 11, Costco will increase its starting pay, currently $13 and $13.50 an hour based on location, to $14 and $14.50. About 130,000 U.S. employees will get a bump in pay from Costco. Earlier this year, Indeed published research based on reviews on its site that ranked Costco as the top retail employer when it comes to a combination of pay and benefits.

Costco is not the only major retailer sweetening the deal for hourly workers. Earlier this year, Walmart announced it was raising its starting pay to $11 an hour. Last week, Walmart introduced a new educational benefit that will pick up most of the tab for employees to earn an associate’s or bachelor’s degree in business or supply chain management from select colleges.

Target recently went $1 better than Walmart with a starting wage of $12 and a promise to raise that to $15 an hour by 2020. The chain’s CEO, Brian Cornell, has said that Target saw a 30 percent increase in applicants when it raised its starting wage to $11 an hour before last year’s Christmas selling season.

DISCUSSION QUESTIONS: Do you think the retail industry, in general, needs to reevaluate its labor practices in light of the job market? What makes Costco a preferred retail employer in your view?

Please practice The RetailWire Golden Rule when submitting your comments.
Braintrust
"People is the only way to compete. Paying more than you might feel you should allows employees to not feel like cogs in a wheel."

"Pay people a living wage and give them decent benefits and shrink goes down, turnover is reduced, and loyalty improves and you attract better quality."

"For a long time, retailers could hire associates with almost any background and train them to deal with the customers. That was before the Internet..."

I do think the industry needs to reevaluate its labor practices for many reasons.

This is still a big ask — changing a model that has kinda sorta worked for almost 100 years. Unfortunately for retailers, it has to happen.

Certainly, and I would even go further. Not only in light of the job market but also in order to deliver a great customer experience. It is very simple: you do not get the best if you pay too little. Employees are the most valuable component in a company. Show them that they are of value for you and they will pay it back to you over the long run by being more loyal, by working harder and by providing a better customer experience.

Costco is a preferred retailer because it takes care of its workers, pays them well, gives them great benefits and offers a positive work environment. This also contributes to Costco being a great place to shop and an even better place for both customers and workers to interact. Together you have a superior combination for a great retail experience.

The short answer to the question about labor prices is: Yes. To get good people, you have to pay them fairly. We’re in an economy where there are now more jobs than people. Pay someone fairly and they will work hard for you. Take a lesson from the Starbucks playbook. They pay their people well and take time to train them — the end result is an employee who works hard and doesn’t leave. Take a look at the cost of rehiring, onboard training, etc. Consider taking a part of that cost and investing it back into your people. Lower turnover will ultimately save a company money. So, paying a little more pays off in better employee productivity and morale as well as lower employee churn.

Re-evaluation is necessary. If it costs less to retain workers and if the job market stays tight, then employers need to pay employees a living wage, provide training so employees can be successful in their jobs, and provide career paths. When other employers treat employees this way, an employer can not expect to retain employees and will continue to have a high turnover rate and employees who are not performing well.

Happy employees mean happy customers. It’s that simple. Businesses need to take a hard look at themselves and get their priorities straight. There is no one more important in a retail store than the store associate. This person makes or breaks the sale. When management treats them poorly, as in the case of so many retailers, the company loses sales. Customers walk out unhappy, many vowing never to come back. I read so often about how the company that was struggling still managed to pay their substantial executive salaries and bonuses. If they would lower those vast wages, hold the bonuses and reinvest in their company starting with better wages and treatment of the store associate, there is no telling how much more business they would do. Recently, I have seen articles stating that former Toys “R” Us employees are going to sue for severance pay, while the company’s former top executives who didn’t even have the decency to stay with the company until the end, all left early WITH their bonuses. That’s not right,… Read more »
2
|
0
-   Share

People is the only way to compete. Paying more than you might feel you should allows employees to not feel like cogs in a wheel. Retail seems to divide between those that get this and bean counters cutting employees and holding a lid on wages. Would JCP be where they are now if they didn’t have 1/2 the employees they used to have on the floor 10 years ago? And wages probably would have been one way to have held on to the best. Hats off to Costco for getting it.

The retail industry needs to not only evaluate their labor practices in relationship to the tight labor market but they need to do it because of a number of factors, including the change in the quality of the workforce they need to have to compete in today’s hyper-competitive marketplace and the increased cost of turnover.

Retailers will always succeed best that play the realities of supply and demand most astutely related to all aspects of the business, including staffing. Staff are not donkeys with blinders circling the olive press, they are the face of the enterprise and advocates for improvement. This moves supply and demand to a higher level at which attitude, capabilities and growth potential really matter, and pay scales in line accordingly. I believe we will see a widening gap in worker wages to reflect contributions to business success.

What’s interesting about Costco is they just simply have given these raises – with this only being the most recent. Management practice tends to be to want to manipulate people into “working harder” with raises — making them bonuses, offering incentives, etc.

So let me offer this intriguing and provocative article by Stephen Shapiro from Inc that appeared today. He suggests that the harder we push toward a specific goal, the less likely we are to make it. And includes research into motivation that shows when people are challenged intellectually and creatively they achieve goals better than when they are offered a reward for meeting them. A worthwhile read that uncovers some pretty dysfunctional management practices.

I find myself preferring to shop at places where I know the employees are well trained in customer service and taken care of by the company. Costco has the reputation of being an employee friendly environment. You can ask any employee for directions or advice and they gladly interact with you. This is something you do not often see with some of the competition or in many big box stores. Keep it up, Costco.

Costco has long been the leader in the field.

YES! Oh, sorry. It’s not just the job market, it’s good business practice. Pay people a living wage and give them decent benefits and shrink goes down, turnover is reduced, and loyalty improves and you attract better quality recruits. It isn’t really all that complicated. What makes Costco a preferred employer? They get their employees want to be treated like human beings, not red ink on a balance sheet.

In this world of expanding e-commerce, customer experience is one of the few differentiators a retailer has. Fundamentally, employees who are not paid a living wage cannot deliver the type of high-quality experience that is necessary to keep customers off their phones and away from Amazon. By paying a strong hourly wage, Costco gets to select the best retail associates, and maintain their competitive advantage.

This approach would seem obvious, but few retailers have embraced it. Too much of a focus on expense line and not enough on incremental customer value, which leads to strong comp sales.

Clearly the most undervalued asset retailers have is their associates. Cutting payroll is a fast way to becoming more profitable and an even faster way to brand deterioration. The entire process (if that’s the right word) of human resources needs to be re-evaluated as people are the difference between online shopping and in-store shopping. Excellence in associates should be paramount for retailers in the age of AMZN. Congrats to Costco for starting down that road.

Costco is right on target. Store personnel, when feeling appreciated and recognized (and rewarded) for a good job take ownership and a pride in their work. Many retail establishments haven’t seen this light, and that blindness produces staff that are prone to offer little or no service, and possess little, or no pride in their job or employer. Employee involvement programs that solicit employees’ input produces pride in their work. Starbucks took a commodity and repositioned it through uniqueness on their product and most importantly, their staff — excuse me, Baristas. For the most part, retail is not in the commodity business, but in relationships, which are by far created by staff. Yes! The retail industry does need to reevaluate, constantly. It is always well worth it!

For a long time, retailers could hire associates with almost any background and train them to deal with the customers. That was before the Internet, mobile shopping, Buy Online and Pick Up in store and Amazon. As the retail industry has evolved, and rather rapidly, the skills required for store associates have increased to being able to use data, digital devices and to treat the customers well. With these skill requirements changes, retailers need to find people with more skills and to provide additional training. Given today’s booming economy, the problem of hiring and finding those skills has increased dramatically. With turnover very expensive, it is not surprising that retailers have to adjust their labor practices.

Costco has stayed ahead of these challenges by being the best retail employer and attracting better talent.

Braintrust
"People is the only way to compete. Paying more than you might feel you should allows employees to not feel like cogs in a wheel."

"Pay people a living wage and give them decent benefits and shrink goes down, turnover is reduced, and loyalty improves and you attract better quality."

"For a long time, retailers could hire associates with almost any background and train them to deal with the customers. That was before the Internet..."