Could a robotic grocery store startup become a model for ending food deserts? 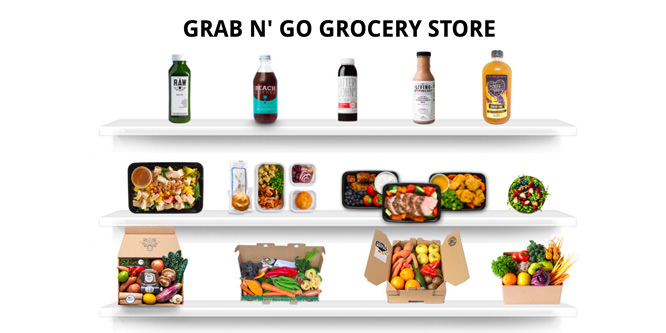 A startup that began with the idea of offering low-cost grocery delivery is now pursuing a tech-forward pivot into the realm of grocery pickup, with an eye toward addressing the problem of food deserts.

Shotput, based in Oakland, CA, began by leveraging UberEATS, Postmates and Caviar to deliver fresh groceries, as described in a press release from the company. Touting 30 percent week-over-week growth, the startup is planning to set up pickup points so that people can order food at work via its app and pick it up on the way home. Then, by the end of the year, Shotput intends to set up “robotic grocery stores” in office parks, train stations and parking lots. They intend to keep costs 30 percent lower than Safeway with the use of supply chain technology such as robotic shipping containers that can track packages in transit.

The company’s website bills Shotput as a “grab n’ go grocery store” and purports to cut out the middle man at every step of the way, yielding prices 40 to 60 percent lower than elsewhere on high-quality food. The site also offers price matching on any product they have available.

While the food desert challenge is generally associated with urban poverty, the press release and site display a list of offerings catering more to the Silicon Valley set than those struggling to make ends meet, such as pre-packaged meal kits, raw juices, cold-brew coffees and kombuch.

More conventional grocers have been implementing and incentivizing pickup recently as a way to meet customer demand for convenience while saving on the high cost of delivery. Walmart, for instance, has begun offering a program called Pickup Discount, which allows customers to get select items at a reduced price if they buy online and pickup in-store rather than opting for delivery.

Shotput is not the first startup to play with the idea of robotic grocery stores as a solution to food deserts. In 2015, an Iowa non-profit called Eat Greater Des Moines announced a partnership with a tech firm called Oasis24seven to place automated grocery stores in areas underserved by conventional grocers.

DISCUSSION QUESTIONS: Could app-based ordering with delivery to pickup points like Shotput plans to offer catch on as an alternative to traditional grocery shopping? Is it feasible for Shotput to keep its prices low through supply chain efficiency? Could Shotput’s concept provide a model for the alleviation of food deserts?

Please practice The RetailWire Golden Rule when submitting your comments.
Braintrust
"With this and products like Blue Apron and store delivery services the need to visit the grocery store is becoming less of a requirement."

"Imagine a “chuck wagon” on the shoulder of the freeway as you’re in stop-and-go traffic. Right?!"

"What’s interesting about this is that it raises the question of how many people are there out there that retail isn’t serving completely?"

13 Comments on "Could a robotic grocery store startup become a model for ending food deserts?"

I’ve seen the stat that 90 percent of U.S. consumers drive by a local grocery store on a daily basis. While pickup points other than at the grocery store may be helpful, even necessary, in true food deserts, I don’t see the pickup point option catching on broadly unless it is for assortment that is uniquely different from what is available in fairly traditional grocery.

Grocery isn’t the only category where this is taking place. Robot retailing is happening in a variety of other areas like beauty, health and pet staples. Shoppers buy because of experience or convenience. Most retailers nowadays can only compete on experience because Amazon and Walmart are quickly monopolizing the convenience side. With their supply chain model and low operating cost, robot retailers could be one of the few “retailers” that can actually compete on convenience.

Convenience will always be an attractive option to the demographic this is aimed at so it will probably catch on. With this and products like Blue Apron and store delivery services the need to visit the grocery store is becoming less of a requirement. But what is the long-term goal here for grocery retailers? They will still need to work hard to get people into stores where they spend more rather than just getting the convenience items needed right now.

As a child, I was able to visit my grandmother in Switzerland. She lived on a remote farm in the foothills of the Alps. I remember going to the Migros (a Swiss grocer) truck. The truck was a mobile grocery store with a center aisle for standard fare — milk, butter, eggs, onions, lettuce, canned goods. I believe it made the rounds three times a week as back then. European refrigerators were very small — think a dormitory mini-fridge. Perhaps what’s old is in fact new again? Maybe the bookmobile will come back? This concept integrated with new technology — RFID tagging for dynamic inventory control and automated checkout (Amazon Go on wheels) — could be viable.

App-based ordering with convenient pickup will surely catch on, no doubt. However, the small format with a limited assortment just doesn’t fit into this model. Why would shoppers stop into somewhere for some of the total list when they could visit a large store with a wider/deeper assortment and still pre-order/pickup? Besides, there is already a format that fits this need with shallow assortments and quick, easy service — convenience stores.

The grab-and-go concept is what the c-store is supposed to be, isn’t it? I am thinking of the growing number of grocery stores we normally pass on any given day. Possibly five different brands. So what is going to make this concept successful? I am not going to stop at a c-store for eggs when I am going to pass a number of typical larger grocers along the way. I wish them luck. But …

This doesn’t feel like a scalable solution to me and it doesn’t feel like an answer to food deserts — urban or rural. That said, assuming right selection and strong execution, it is a model that could easily work in a variety of markets. We will see more and more app-based ordering as time goes on, but I’m not sure it’s a threat to the channel as a whole quite yet. As to prices, again the answer is, “yes, but … ” depending on scale, inventory, trading area, etc.

I’m with Ryan here. This in not the answer to food deserts, but it is an interesting solution that can see some success depending on specific inventory, customers and location. Leveraging technology to create a new experience is what the future of retail is made of.

It’s just a matter of time before pop-up food stores appear everywhere. Remember the Korean market projected on the subways walls with touch ordering capability a few years ago? Here’s an idea for all you entrepreneurs: pop-up food stores on freeways in peak rush hour times. Imagine a “chuck wagon” on the shoulder of the freeway as you’re in stop-and-go traffic. Right?!

The idea is sound and flips the traditional efficiency-based model: bring the food to where the people are versus having them go to where the food is located. Increase convenience and personalization quotient by adding easy app-based ordering and various delivery and pickup point options. At some point, we can also introduce driver-less food trucks to reduce cost and increase efficiencies.

From my view, although I like the concept and it certainly has merit, I do not see a strong moat around this business model. It’ll come down to how well it executes, builds trust (timeliness, predictability), grows top line and establishes profitability.

What’s interesting about this is that it raises the question of how many people are there out there that retail isn’t serving completely? Or in the way they’d like? While the idea of ordering for pick-up at a location of your choice seems like a solid one, and I’m sure will see traction in some parts of the market, the average customer has a lot of choice for their grocery shopping. Whether discounts would persuade them to switch models is another question. For food deserts this could be a solution, but that does means limiting the audience, which may or may not be an issue for the business.

While I don’t want to discourage people, little I saw on Shotput’s website inspired confidence. They don’t seem to really have experience in food retailing or anything else for that matter, and to be honest, it reads like a parody of some Dotcom.bubble concept … all full of ideas and enthusiasm, but devoid of any connection to realities of cost or implementation.

As for the specific ideas they offered: pickup depots, which require a smartphone, car and — implicit from “on the way home from work” — a job, all things in short supply in food deserts. Robo-stores: I guess I’d have to see the cost data on this … it’s hard to imagine it’s cheap.

There is merit in what they are suggesting to implement, but it’s hard to see this model be cheap enough to scale sustainably. In many ways I feel the idea could be summed up as a cheaper cost version of a c-store. Do we need more of those? Maybe, but it’s not the first time we’ve seen the idea of “stop on your way home from work” but how many of us actually do that? I’m not sure grocery pickup is a compelling enough reason to stop on my home commute such that it discourages me from seeking out home delivery instead.

Braintrust
"With this and products like Blue Apron and store delivery services the need to visit the grocery store is becoming less of a requirement."

"Imagine a “chuck wagon” on the shoulder of the freeway as you’re in stop-and-go traffic. Right?!"

"What’s interesting about this is that it raises the question of how many people are there out there that retail isn’t serving completely?"