Could ‘platform thinking’ be a blueprint for retail success? 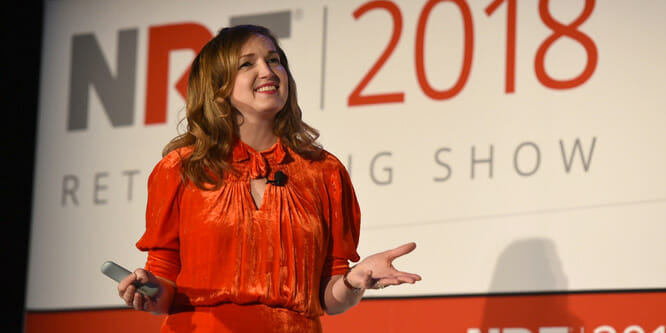 “Platform thinking” is the key to succeeding at retail in the face of the upheaval it has experienced, according to Kate Ancketill, CEO of GDR Creative intelligence. In a session she gave at the 2018 National Retail Federation show in New York City, Ms. Ancketill defined steps that were, in her view, critical for retailers to compete with monopolistic players like Walmart and Amazon.

“No one entity has enough data or machine learning to do its job sufficiently well to compete with the big platforms,” Ms. Ancketill said. “You can’t beat them — they’re too big. You can either join them … or you can not join them … but you can’t not think like them, because they employ platform thinking and everyone else has to, too.”

The first component of platform thinking she defined was adopting new contextual channels, such as in-flight and car dashboard-based shopping.

The second was moving outside of traditional core competencies. Ms. Ancketill gave examples:

The third was understanding the deeper significance of a product in a customer’s life. She gave examples such as:

The fourth part Ms. Ancketill defined was getting as much out of assets as possible (“sweating assets”). She pointed to examples like Japan’s Toyota Drive to Go store, which has reconfigured its car rental space into a café-like environment.

DISCUSSION QUESTIONS: Is platform thinking as Kate Ancketill defines it a path to success at retail? Which elements promise the most success and the ability to compete with big platforms such as Amazon and Walmart?

Please practice The RetailWire Golden Rule when submitting your comments.
Braintrust
"Not an intuitive or necessarily an easy concept … but it does make sense for certain retailers. "

"Those are all great ideas, but unfortunately can all be easily copied by big platforms. "

"I don’t accept the argument that you can’t compete with 'large platforms.' Good thing nobody told that to Sam Walton, or Steve Jobs or Bill Gates ..."

15 Comments on "Could ‘platform thinking’ be a blueprint for retail success?"

I’m not sure I understand what “platform thinking” is and how is it connected to the examples above, however the way to compete and survive is to create competitive advantage in the specific niche in which you operate. Create a better customer experience, provide better service, offer multichannel purchasing opportunities, seamless payment process and generally aim to make customers “love” shopping at your stores whether online or off-line.

All enterprises operate on platforms and the better these are integrated the most accelerated the return on investment. As every business turns resources into profits, the managing of this transit defines the sustainable value that the business can deliver. Too often retailers have focused on the core operations of inventory cycle and financial systems fed by point-of-sale, but the pressures of customer acquisition and lifetime customer value require, and will continue to require, expansion into customer experience functions and front-of-house technology application.

Not an intuitive or necessarily an easy concept … but it does make sense for certain retailers. This is not a necessity for the small retailer. However medium, large and enterprise-class retailers should be using platform thinking to pursue success. That is, thinking of oneself as a media company rather than a wallpaper company is important to connecting with a new idea, taking on new product lines and bringing it all into a unifying retailing strategy. Interesting.

Hmmm, though I look at it a bit differently, I’ve been spreading the word about the shift from products (retailers as places that sell stuff) to platforms (retailers as connected ecosystems that encompass physical, digital, data, content and more) for the last several years. It’s a foundational principle that underpins my work and presentations. In retail, it’s a shift that made all the difference for Apple, Amazon, Walmart and others. The commonality with Ms. Ancketill’s example is a focus on managing and exploiting connections, even over product/solution innovation. And yes, this “platform thinking” is available, and beneficial, to companies of all sizes.

Those are all great ideas, but unfortunately can all be easily copied by big platforms. The big platforms are winning because they are successfully executing on assortment, price and convenience at scale, and have strategically focused on developing well-curated “walled gardens.”

I think retailers should focus on the three fundamentals of assortment, price and convenience with respective attributes being localized and personalized, competitive and truly frictionless. In addition, retailers should devise a way to federate customer data outside of Facebook, Google, et al., potentially standing up a decentralized model for permission-based access to shared customer data, where the consumer is rewarded for sharing.

I would have liked to have heard her whole speech since the gist of her argument isn’t crystal clear to me here. That said, like Carol, I have been beating the drum that retailers have to stop thinking in terms of selling “stuff” and find new ways to optimize space for — quite literally, sadly — decades. If you want to label that “platform thinking,” fine with me, but I think that begins to trivialize the potential. Also I don’t accept, as presented at least, the argument that you can’t compete with “large platforms.” Good thing nobody told that to Sam Walton, or Steve Jobs or Bill Gates or we would all still be going to the A&P and operating IBM mainframes. Myth has it that the cockroach co-existed with the dinosaur, and we see who won that fight. Of the elements listed above I guess I would opt for the third. If you don’t understand how your offering fits into your customers’ lives, no platform is going to save you.

From what I can tell, platform thinking is about understanding consumers’ needs, frustrations, problems and preferences and then creating brick-and-mortar and online approaches that work for those consumers. This is what we have been saying for years. The difference is that technology allows for a broader range of solutions and even more creative solutions.

I suggest not to get hung up on the name, which is confusing, but concentrate on the essence of the examples given in her talk, about new ways of thinking and presenting the customer experience. It matters not the size of your business, but your creativity in promoting the product(s) and attracting and entertaining and pleasing the customers. The majority of our votes in the poll above: “Which part of platform thinking promises the most success,” went for “Understanding a product’s lifestyle significance.” Make that the attraction for the consumer.

It’s a cumbersome concept, more simply it’s looking to understand your capabilities and understanding how they can be extended beyond the current defined status. Stretch your capabilities, create new markets and extend the value you get from them. I think we all need to do this all the time. The moment you rest on an existing model some new upstart will pass you by.

I would recommend focus over platform. Retailers must give up something to be good at something. No, you won’t beat Amazon at being Amazon. But a retailer that has vision, a defined customer and a refined product offering for that customer can be successful.

The trouble with borrowing terms used in other domains is that they bring their own set of understanding and shortcuts we use to simplify and categorize our knowledge. Be that as it may, the notion of “platform thinking” to me is about changing your mindset as to how you engage with your customers. That requires access and use of data in ways not done before; shifting from having product as the defining reason to the existence of your business to one that is based on a lifestyle and a segment of one; and realizing that you cannot do it all and must be in an ecosystem of partners to execute on delighting your customers.

Such a mindset requires a change from the past and an openness to not only creative solutions to existing challenges, but the ability to combine existing elements to create something that has yet to exist.

What I’m hearing appears to be borrowed from a recent book called “The Platform Economy” and applied to retailing. Amazon is a platform. It allows merchants to sell, warehouse and distribute on their platform. There are home-based entrepreneurs that purchase items on clearance from a retailer like Walmart and sell on the Amazon platform for profit. I get what she is saying; retailing can longer be about merely selling products but establishing a platform for products, customers and distributors to participate upon.

This sounds like the idea of a platform as a business model. Platform business models add value by creating a means for suppliers of things and services to connect with customers. I think the examples in this article over complicate an established way of designing modern businesses. Look into Salesforce.com as an example of a company that facilitates business models like this. They’ve been on this track for close to a decade. BTW, I don’t have an interest in Salesforce or any solution provider. I just want to help readers who may be interested in riffing off of this somewhat well established approach to building a modern business.

They have to have a “platform approach,” especially around data. It’s core and foundational and one of the main things to drive these types of use cases that Kate mentions. But I’m biased — I work for the best-in-class enterprise operationalized data and analytics company. This is what we do, help retailers build that agile data foundation and allow analytics to drive the use cases.

Agreed that platform thinking is necessary. But be careful about data transparency. Also, at a high level, let’s be sure to differentiate between the people who understand the platform (AI, machine learning, programmatic ad buying), and those who understand the protocol (email marketing.) Retail companies need to focus on using the protocol to achieve results. This is why something like email marketing will always exist, Twitter will not. When you have something that becomes a protocol, versus a platform, the protocol almost always wins out. Because you have control. It’s completely transparent. Anybody can use it, it’s free. Facebook could change their mind any day, and everyone would be screwed. Retail companies should beware: The farther you are away you get from the protocol, the potential opportunity to obfuscate the data becomes greater.

Braintrust
"Not an intuitive or necessarily an easy concept … but it does make sense for certain retailers. "

"Those are all great ideas, but unfortunately can all be easily copied by big platforms. "

"I don’t accept the argument that you can’t compete with 'large platforms.' Good thing nobody told that to Sam Walton, or Steve Jobs or Bill Gates ..."