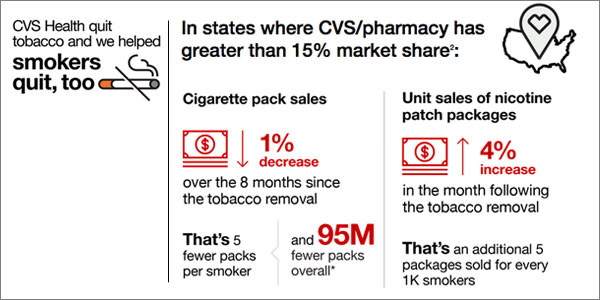 Marking the first anniversary of ending tobacco sales at its stores, CVS issued a study indicating that its decision led to a measurable decrease in the number of cigarette purchases across all retailers.

The study, conducted by the CVS Health Research Institute, evaluated cigarette pack purchases at drug, food, big box, dollar, convenience and gas station retailers in the eight months after CVS/pharmacy stopped selling tobacco products. It found an additional one percent reduction in cigarette pack sales in 13 states where CVS had a 15 percent or greater share of pharmacy, compared to states with no CVS stores. Over the same eight-month period, the average smoker in these states purchased five fewer cigarette packs and, in total, approximately 95 million fewer packs were sold.

Other indicators that the move led to attempts to quit smoking:

"We know that more than two-thirds of smokers want to quit — and that half of smokers try to quit each year," Dr. Brennan told USA Today. "We also know that cigarette purchases are often spontaneous. And so we reasoned that removing a convenient location to buy cigarettes could decrease overall tobacco use."

Saul Shiffman, a University of Pittsburgh psychology professor and expert in smoking and smoking cessation, said it was hard to tell if CVS had a direct impact on overall cigarette sales amid the overall decline in cigarette smoking.

Regardless, the study’s findings and the anniversary prompted anti-smoking groups to call on other retailers to stop tobacco sales.

"These results make it increasingly untenable for responsible retailers — especially those in the business of providing health care services — to continue selling tobacco products," said Matthew Myers, president, Campaign for Tobacco-Free Kids, in a statement.

A year after the fact, how would you rate the success of CVS’s decision to stop selling tobacco products and its surrounding PR efforts? Do you think CVS’s new report will put further pressure on other retailers follow suit?

Please practice The RetailWire Golden Rule when submitting your comments.
Braintrust
"It is difficult to make claims about causation. I was curious as to what impact this decision has had on the sales and revenue of CVS in these 13 states. I think that would also be part of determining the success of the strategy."

CVS’s move was genius in terms of brand and marketing. They’re proving that they can have an outsize influence on the way America thinks about health.

It is difficult to make claims about causation. I was curious as to what impact this decision has had on the sales and revenue of CVS in these 13 states. I think that would also be part of determining the success of the strategy. In addition, that information may have an impact on whether or not other retailers want to make a similar decision regarding the sale of tobacco products.

Don’t break your arm patting yourselves on the back, CVS. Sell cigarettes or don’t sell cigarettes. Whatever. It’s your store brand, and your management’s call regarding assortment and profit and image. But when you demonize customers who choose to buy cigarettes, and publicly question whether other retailers who decide they will serve that market are “responsible” (by quoting a study *you* controlled and financed) you look like a self-serving bully.

Well, first of all I think there is a tiny cause and effect problem here. Sure there is a slight decrease in single pack sales, but can CVS really take credit for it? I’m just not sold on the logic.

The decision was a first step toward repositioning the brand as a true health and wellness center. The next will be dumping the soft drinks, wine, beer, junk food, candy, etc.

As to the impact of the report, I wouldn’t hold my breath here either.

They should probably quit (the PR effort) now while they’re still ahead. Taking credit for something you had a tenuous part in invites being later blamed for something you also had little part of…and no doubt CVS does something that someone, somewhere, doesn’t like.

The cigarette ban is far reaching beyond the sale of cigarettes. Car rentals, hotels, restaurants, bars, and even casinos are banning smoking. Smoking is associated with bad behavior and retailers don’t want the image. Tobacco shops and convenience stores will always be around to cater to that consumer. There is nothing more unflattering for a retailer than to have its workers smoking at the side of the building. If I were a retailer I would go beyond banning cigarettes and ban smokers from working for me.

From a policy and public relations perspective, it has only upside. To extrapolate this to the larger population, I don’t know. There has always been a correlation between smoking and educational level. Smokers, just by that habit alone, do not care about their health and will find whatever source it takes to feed this habit.

Braintrust
"It is difficult to make claims about causation. I was curious as to what impact this decision has had on the sales and revenue of CVS in these 13 states. I think that would also be part of determining the success of the strategy."