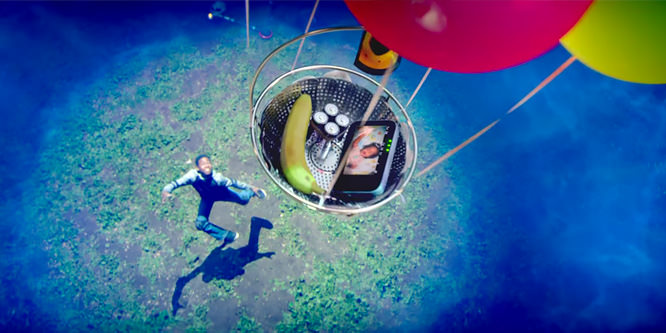 For its first-ever commercials for the Academy Awards, Walmart recruited some acclaimed directors to move its messaging beyond low prices.

Under the theme, “Behind every receipt, there’s a great story,” the directors were tasked with making 60-second “short films” based on six items listed on a Walmart receipt: paper towels, bananas, batteries, scooters, wrapping paper and a video baby monitor.

In a statement, Kirsten Evans, Walmart’s SVP of marketing, said the items “represent what our customers experience in the store — a combination of food items, everyday general merchandise items and then some items that are a little special.”

Seth Rogen and Evan Goldberg, actors who have collaborated on comedies such as “Superbad” and “Pineapple Express,” came up with “Bananas Town,” a musical comedy. Encouraged by their teacher to find “inspiration in unusual places,” a class erupts into dance and sings songs based on those receipt items while encountering a barbershop quartet, ballerinas and the same teacher dressed as a banana.

The other two shorts came from Antoine Fuqua, known for action thrillers such as “Training Day,” and Marc Forster, director of “Monster’s Ball” and “Kite Runner.”

Walmart signed a three-year commitment as the show’s retail sponsor.

“Our brand proposition is ‘Save money, live better,’ and we think we can do more to tell the ‘live better’ side of our brand story,” Ms. Evans told Campaign US. “We’re looking for places to engage our customers in a way that shows that we know what they are passionate about and that we want to be a part of that experience.”

Speaking to USA Today, Laura Ries, president of branding consultancy Ries & Ries, felt the placement was a mismatch because the Oscars are a “high-end, glamorous event and Walmart is not glamorous.”

However, others felt the Academy Awards, often described as the “Super Bowl for women,” reaches a broad yet diverse audience Walmart might be missing. Lopo Rego, a marketing professor at Indiana University, told USA Today, “They’re not pushing low prices every day. I don’t think there’s a lot for Walmart to lose.’’

DISCUSSION QUESTIONS: What do you think of Walmart’s Academy Awards placement and the storytelling-themed executions? Does the retail giant need to take its message beyond low prices?

Please practice The RetailWire Golden Rule when submitting your comments.
Braintrust
"This might just have had the impact it was designed to have."

"Conceptually this is a great idea … but someone forgot to plug it in. At our small party it drew zero conversation."

"Walmart’s Oscar commercial was a refreshing bit of marketing, and is exactly what the retail giant needs to be doing more of..."

Well it’s got people talking about Walmart who don’t normally talk about Walmart! Everybody buys groceries, whatever social group they are from, and this might just have had the impact it was designed to have. There was a good feel of inclusivity at this years Oscars with the coach tour group coming too so perhaps Walmart timed this just right. There was nothing to lose and they gained great coverage.

The consensus in my social media network is that the commercials were duds. This is not Walmart’s fault — it was actually a clever idea. But the folks who wrote the stories just didn’t do a great job.

Maybe a different variety of items would have helped … I don’t know. But I do hope Walmart didn’t pay the writers too much. If I were Walmart, I’d keep working on the concept — and I think it’s an interesting place to advertise.

If you watched each spot in a vacuum, you’d have trouble figuring out how it “sells” Walmart — but as an overall effort to reach a more diverse and potentially upscale audience, the idea was solid. Of the three spots, I thought the “Bananas Town” ad did the best job making the point about the variety of goods Walmart carries, in a whimsical way … and subtly making its point about the tape total, too.

Conceptually this is a great idea … but someone forgot to plug it in. At our small party it drew zero conversation. I think of the iconic “Baby shoes for sale. Never worn” six-word story usually attributed to Hemingway. Why couldn’t something like that have been done visually? I didn’t see a “story” in any of the segments. Special effects and frenetic disconnected movement may have included all the items on the receipt as instructed but it looked as messy as most discount stores.

This approach to contextual, “native” advertising reflects the tsunami of messaging change coming from Madison Avenue. As broadcast and narrowcasting, the big buckets of advertising spend, seek increased relevance and context, this themed story-telling which is so effective as on-location targeted messaging will usher in a more effective paradigm of brand communications. The learnings from story-based themed messaging from the Super Bowl and major holidays offer branding, merchandising and PR value.

I didn’t see any of them! I sort of remember seeing something about receipts but it totally lost me. Didn’t know it was Walmart and didn’t get it.

This is a scenario in which any publicity is considered good publicity. The Walmart brand, while ubiquitous, could take advantage of these sort of storytelling strategies to spread the word and do more of a social media outreach, beyond their everyday low prices.

Brands such as Walmart could benefit by subtle references, attached to emotions and experiences, rather than the obvious every day low price mantra.

By the time the second one came on everybody stopped to pay attention and see what the creators would do with the idea. By the last one, there was considerable conversation about how much fun these were.

Just a comment on the ads overall. Better than the Super Bowl!

With the news that Walmart is going aggressively at Aldi in grocery, I think this was a brilliant move. The Aldi shoppers include the more affluent who like the speed and ease of shopping there, the quality of many items and the sense of discovery around the limited edition items. I would venture to guess that those Aldi shoppers among this segment are who Walmart can target with omnichannel campaigns such as this one.

Great concept and a smart move by Walmart. We will see others duplicate it.
It’s especially smart with Jeff Bezos sitting in the audience and getting air time. I only watched the intro to the Oscars — the rest is a political playtime and a waste of an evening.

The fact we are even talking about Walmart is a win for Walmart. Sure, it will take some time to figure out messaging. But have you noticed the new Walmart commercials on regular TV? They seem to be appealing to more of an urban crowd. Jet.com is bringing in the new urban Walmart customer.

I did see the ads. I thought the concept was good. It did not come off to me as something I would look forward to seeing again. Don’t give up, Walmart.

I agree that Walmart needs to do better on the “Live Better” portion of their value proposition. The Oscars were a good place to start, and I’m sure they have lots of learnings for their next “act.”

Loved the concept, but the execution was so-so. There was a lot of expensive visual production going on, but not a lot of evident attention to brand. Mostly we witnessed some movie-makers showing off their technical chops before an audience of movie industry influencers.

One delightful exception were the yellow smileys that floated down from the spacecraft at the end of “The Gift.” But you had to look fast to recognize them as brand icons.

As a set, all three spots were very much hallucinatory in style, Makes me wonder about the creative direction the directors were given.

It will be interesting to watch and see if this truly marks a turning point for Walmart positioning — a shift in balance toward identifying with its shoppers’ experience (“Live Better”) with reduced emphasis on the pure low-price message. If so, I’d prescribe an approach going forward that is more story-driven and less about special effects.

Walmart’s Oscar commercial was a refreshing bit of marketing, and is exactly what the retail giant needs to be doing more of, especially as they move towards a more aggressive strategy of ramping up their online business. Even though Walmart is the low-price king of the retail world, competing strictly on low prices only works until the next big competitor — and in the online world, that would be Amazon — offers equally low prices.

The ads were very well-suited to the Oscars. While their traditional “low price” message would have been off-point for the event, Walmart created an ad that appealed to viewers’ interests — creating a deeper emotional connection that transcends the price advantage. In the online world where the next retailer is just a click away, Walmart will do well to continue a strategy of more story-telling like this to supplement its low price ad strategy in order to forge a deeper and more personal connection with consumers that want more from their retailers than just a price advantage.

Walmart did take its message beyond low prices: The Rogen-Goldberg bit was most entertaining — and most commercial. And I think it used the items on the receipt most clearly. The other commercials were futuristic (maybe it was because it was for the Oscars), but reminded me too much of “Road Warrior” and “Close Encounters of the Third Kind” — didn’t really connect with Walmart.

Taking a page from the Apple advertising playbook — making the audience feel their lives will be better with the product/brand — this was a great idea, but not the best execution. I think what Apple does very well is connect the idea of how a common feature in a product can tell your life story and therefore make your life better was lost in the execution by Walmart. Yes, everyone knows Walmart, but everyone knows them for low prices, not for the “live better” part. “The Gift” did a better job tying the common grocery items back to Walmart with the smiley faces at the end but some people might miss the connection.

Overall, great idea, and I hope Walmart continues producing these to change the playing field as they compete with the likes of Aldi, Lidl, and others for grocery mindshare!

Braintrust
"This might just have had the impact it was designed to have."

"Conceptually this is a great idea … but someone forgot to plug it in. At our small party it drew zero conversation."

"Walmart’s Oscar commercial was a refreshing bit of marketing, and is exactly what the retail giant needs to be doing more of..."