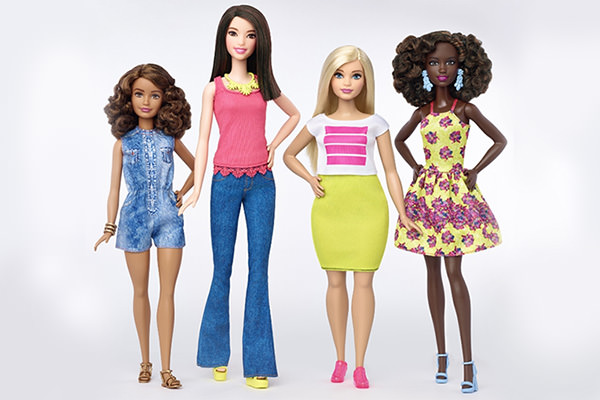 The push for more diversity started in 2015 when 23 Barbies with new skin tones and hair colors (and, oddly, a flat foot version) were added as part of its Fashionistas line. The 2016 line will include four body types (the original plus three new bodies), seven skin tones, 22 eye colors and 24 hairstyles.

The curvy Barbie in particular received attention because the iconic Barbie shape has often been accused of being anorexic. Her out-of-proportion bust was also seen as unrealistic and stiletto pumps too image-conscious for girls.

“We believe we have a responsibility to girls and parents to reflect a broader view of beauty,” said Evelyn Mazzocco, SVP and global general manager Barbie, in a statement.

Many applauded the move.

“Our call hasn’t been to throw Barbie out the window, but for her to be one body in a plethora of bodies,” Pia Guerrero, founder of Adios Barbie, a body image website, told The Wall Street Journal. “It’s nice to see that they have different shapes and sizes because those bodies do exist.”

Some, including Ms. Guerrero, were still dismayed at the hourglass figure on all the dolls. Others felt the labeling would bring up body image issues to girls too young to care about them. Others felt girls recognize that Barbie is a toy and wondered what all the fuss was about.

The other storyline was whether the changes would do much to revive the popularity of the 57-year-old Barbie, whose sales have been declining by double-digits in recent years. Some felt the range would appeal to a wider demographic. While Barbie now encompasses 180 careers, some felt the unnatural body measurements challenged the doll’s ability to act as an aspirational figure for girls.

Other challenges facing Barbie include a shift toward electronics and games in recent years and greater demand for less gender-specific toys. Mattel’s Monster High line and the Disney Princess characters from Hasbro also have stronger backstories outside their looks.

Will girls better relate to the new range of body types for Barbie? How do you think the changes to the line will affect the brand’s future?

Please practice The RetailWire Golden Rule when submitting your comments.
Braintrust
"As the parent of an 11-year-old girl, one who just selected a few dolls to save as meaningful to her before giving the rest away to another little girl down the street, I think what Mattel is doing with Barbie is all wrong."

It’s about time that Mattel listened to its customers. For years the toy giant has been deaf to customers and critics. I think this is a positive development for the company and should result in higher sales. And it opens the door for future iterations and innovation.

As the parent of an 11-year-old girl, one who just selected a few dolls to save as meaningful to her before giving the rest away to another little girl down the street, I think what Mattel is doing with Barbie is all wrong. My daughter had Barbies, yes. The ones she loved the most were the ones with the deepest back story, from the Diamond Castle theme. But the dolls she really loved the most were Monster High, with books, cartoons and more to bring them to life far beyond the physical doll. Are those dolls “realistic”? Not by any long shot — in fact, they’re even farther from reality than the classic Barbie figure everyone frets about: vampires, cat-people, zombies, abominable snowmen, you name it. The difference to me is that Mattel has basically one character (and her friends, which, outside of Ken I don’t think anyone can really name or relate to), and they try to make this one character, Barbie, be everything to everyone. What everyone else is doing is coming up with… Read more »
0
|
0
-   Share

I don’t believe Mattel thinks they “have a responsibility to girls and parents to reflect a broader view of beauty.” Instead they have a responsibility to investors to make money. Barbie is like postage stamps. A lot of them are sold to collectors as well as kids. The more variety the more you can sell. As for the basic Barbie, the best person to decide what sells is a six-year-old girl. My guess is if it’s not broke, don’t fix it. The traditional Barbie is a good seller. I agree with Pia Guerrero’s perceptions but not her desired outcome. For Barbie to sell she must come across as unrealistically attractive.

Great step by Mattel to add the range of body types to Barbie. However, many others like American Doll already had added that expanded range a long time ago so it’s not unique. The Barbie brand needs a major re-brand direction that calls for changes that are more in line with kids today. It’s unclear how this change will help improve Mattel’s current business results as their issues requires some major strategic changes.

Well said Nikki Baird! Women aren’t annoyed with Barbie just because of her unrealistic body — it’s also with her lack of real meaning to the world. She is only about beauty, not strength, intelligence and self worth. Look at culture today — girl power has never been more prominent. Mattel should be looking at THIS and enhancing Barbie to be more than a vapid doll. She needs to be a character worthy of admiration and “life modeling,” not just runway modeling.

This is too little, too late. American Girl gave aspirational, relatable role models to youth, earlier and better than Barbie. Further, the emphasis on looks as the value of the doll is perpetuated (versus American Girl characters). Finally, if Barbie has a place at all, it’s as the insane ideal that lives in our collective subconscious.

Being the dad of a Barbie daughter (she is 30 years old now) I am confident that she would have liked the curvy Barbie more. Still, her favorite thing to do with Barbie was to cut her hair. Not sure where she got the scissors, but back in the days of no Google parenting we left stuff where kids could find it.

For today’s kids — with the massive media exposure via cable, internet and working parents that are not sure what their kids are doing — the new Barbie look is fine. I hope that they have parts available, mainly heads, so if kids find the scissors and chop the hair off the parents can get new heads for the Barbies. They could offer different heads to really tune the style in.

Dolls are dolls! For kids! To play with! Sure, some of them are bought and stored or displayed in pristine fashion by adult collectors. But come on, most of the billions of them that have been made and sold are for kids because they appeal to kids’ imaginations and creativity. Dolls need not be “realistic.” They need not be educational or aspirational or socially conscious. Were the carved wooden or cornhusk dolls and figures that were made and dressed by poor farmers and their wives for their children realistic? No. But they did the job. They were played with, loved and cherished by children, were often kept as mementos and passed on as heirlooms to future generations. I think it’s great that Mattel has decided to add some diversity to their line. I think it’s lovely that dolls which come with backstories and unique qualities are now available in the market. But let’s not make more of a big deal about this than it really is. Little girls (and boys) create their own backstories for… Read more »
0
|
0
-   Share

Mattel is doing a lot of things right with Barbie, starting with the ad campaign that shows girls being whatever they want to be and layering on it the new body types, skin, eye and hair color that make her more relatable to a diverse population. Add to it that the clothing choices are no longer interchangeable and you’ve added a much bigger store presentation to tell the story.

Although electronics are still a huge part of kids’ toys, I think there is a bit of a backlash with younger parents also encouraging imaginative play.

Mattel would not be making these changes unless they were confident they would be accepted. It will be interesting to see if they make the same changes in Asia and Latin America. My guess is no. Real diversity is where there is imperfection of some sort. With these new body types, Mattel is not remotely close to showing imperfection.

I agree with Nikki, as usual. 😉 At the age I played with Barbie, body proportions meant nothing, nada to me and should mean nothing nada to young girls today.

The deal with Barbie back in my day were all the outfits and even better, Barbie’s house. Have I ever mentioned that I was meant to be an architect? Yep. Back in the day, I bought the little pieces of furniture and laid out the house. I made clothes for her out of scraps from my mothers sewing room, makeshift furniture, walls, swimming pools. It was all about the creativity and nothing about the actual doll or what shape she had.

Young girls don’t associate with their dolls. Meaning, they aren’t trying to “be” them or even look like them. Take Raggedy Ann for example. They use them to build stories.

Barbie’s brand was originally designed to be the ultimate image of a woman….not a realistic one. Why Mattel should be compelled to create alternate images just to be politically correct is going too far. Barbie is a toy for children, and nothing more. Think of Barbie as a character in a play, and we rapidly recognize that she can be monolithic, distorted and politically incorrect. Why can’t we just accept her for this?

Braintrust
"As the parent of an 11-year-old girl, one who just selected a few dolls to save as meaningful to her before giving the rest away to another little girl down the street, I think what Mattel is doing with Barbie is all wrong."