Do Carolinians have Wegmans on their minds? 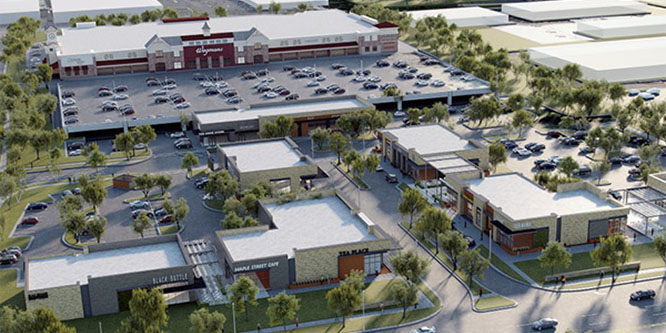 Wegmans and the “reverence and devotion” of its legions of fans (Sometimes known as Wegmaniacs) has been compared in the past to a cult. The family-owned chain’s fanatical following hasn’t diminished one bit as it has opened stores far from its Rochester, NY home.

On Sunday, Wegmans opened its first store in North Carolina (100th overall) and the crowds, according to the chain, were record-breaking.

When all was said and done, more than 30,000 people visited Wegmans on its grand opening day.

“We knew there was a lot of excitement, but the outpouring we saw yesterday was beyond anything we could’ve hoped for,” Hallie Johnston, the store’s manager, told WTVD. “From the bottom of our hearts, we want to thank everyone who made our first day in North Carolina so special. We’re incredibly proud to be here.”

DISCUSSION QUESTIONS: What accounts for Wegmans popularity with consumers in the markets it serves? How has Wegmans been able to maintain or grow its popularity as it adds more stores in new markets?

Please practice The RetailWire Golden Rule when submitting your comments.
Braintrust
"They run their company the same way it was done back in the day when the name of the company was typically that of the family running the business."

"Wegmans is the best and for their followers, they will do well anywhere they go."

"...only time will truly tell if the market can support another player or if this is just a short-term attraction because Wegmans is new."

12 Comments on "Do Carolinians have Wegmans on their minds?"

The response is pretty simple – North Carolina is loaded with transplants from the Northeast. The “cult of Wegmans” remains strong and it’s admirable that they continue to provide a unique experience in the hard-to-differentiate grocery space.

I very much agree with David. As a recent transplant from Ohio to the Charlotte area, I’ve been astounded by the number of others in my area from the Northeast and Mid-Atlantic. And coming from the hometown of Kroger, I’ve been disappointed by the experience at regional chains (including KR’s HT), the exception being Publix. Unfortunately, that experience (and superior quality produce and baked goods) comes at a steep premium. I would welcome another option that offers a better blend of consistent experience and rational prices.

Wegmans is the textbook example of a retailer that is customer service focused, has an excellent retail shopping experience and a progressive grocery growth strategy. They stay nimble to address the changing needs of their customers while staying true to their employees and business model. Wegmans has been a “best in class” retailer since the early days of the ECR movement and at the forefront of progressive changes in the grocery retailing business. All of this adds up to excitement and a loyal customer following.

I have to give credit to Wegmans’ marketing team, because my experiences with the store don’t reflect anything above ordinary.

I once was verbally “attacked” by a very nasty/rude cashier, the rest give their required un-genuine greeting. In an age of environmental plastic bag issues, they use excessive amounts of bags. Their bulk self-serve aisle (nuts, grains, dried fruits, etc.) is usually dirty and items are not fresh. In the past, they refused returns for perishable items (even the same day) but would say something like “this is a one-time exception.” I can go on…

They do have a good selection of organic produce but not a lot. Their prices are generally good and SKU for SKU far and away beat Whole Foods (but that’s not unusual). They have a variety of in-store “specialty” departments like prepared food and floral, but that’s table stakes these days.

It’s puzzling to me. It must be marketing…

You can sum it up in one word: “experience.” When you shop at Wegmans, you have an experience like no other supermarket. From atmosphere to design, products, associates, you name it — Wegmans does it like no other. Wegmans has remained successful because they put the customer first and understand their customer and they realize that it’s not smart to suck out every penny imaginable for personal profit. They invest heavily in their stores and their employees, and it makes a difference. They haven’t sold out to some private equity firm or gone public. They are family run and have no plans of changing that. In essence, they run their company the same way it was done back in the day when the name of the company was typically that of the family running the business — like Macy’s, Gimbels and so many others. As long as Wegmans continues this philosophy, I see them only becoming even more successful.

Social media and old-fashioned human interaction has a lot to do with the initial popularity. Many people in North Carolina are familiar with Wegmans from having lived farther north previously, so in the months leading up to the store opening they were telling all their friends and neighbors how awesome Wegmans is. A few months of anticipation built up enough excitement to draw 3,000 to the opening — impressive!

Wegmans epitomizes the concept of shopping as an experience. The stores are huge and can be overwhelming, but they are also fun to shop and offer so much to experience. Wegmans also works hard to establish an emotional connection with their customers and especially people who love food. Wegmans celebrates food and the role it plays in our lives and they use storytelling effectively.

It’s really quite simple — Wegmans’ reputation for service and community follows them wherever they go. It’s all about reputation and consistency. By the way, if anyone wants to know how to compete in today’s VERY competitive retail landscape, just study Wegmans!

Wegmans is the best and for their followers, they will do well anywhere they go. They only invest in high income areas and rightly so. They carve out a niche, and provide excellent service and amazing perishables. The best of the best, period.

There is a definite attraction to a new player in the grocery space, and the larger metro areas do well with these new players (Lidle, Aldi) who compete with the more established Harris Teeter, Publix and Walmart. However, only time will truly tell if the market can support another player or if this is just a short-term attraction because Wegmans is new.

Being a Wegman’s fan, and so missing it here in Connecticut, I can attest to the fact the total experience is a welcoming and pleasing one. The Wegmans brand stays relevant with spot on merchandising and offering a connection with their customer that is so much more than a standard supermarket. I remember they had a menu magazine that would come out monthly with great recipes using their products. Other supermarkets are trying, but I just haven’t seen many that can beat Weggo’s!

This has been a much anticipated march to the south by Wegmans, where it will be confronted by a couple of very good retailers. Harris Teeter is the region incumbent and Publix has encroached from the south. Raleigh supermarket customers are blessed to have three of the best in their market. Some of Wegmans thinking may be to slow down Publix who currently operates 13 stores in Virginia. The Wegman mantra like the Publix mantra, not only follows, but also precedes their arrival into new markets.

Wegmans is arguably the most-admired supermarket chain in the nation. It’s not only superb at merchandising its stores and marketing its brand, but its operations side is exceptional too.

As it passes the 100-store milestone, I feel compelled to offer this reminder to my friends in Rochester: The bigger the chain, the longer the distance from its customers. I call this “the Paradox of Scale” and I probably repeat it too often, but there it is anyway.

When your reputation precedes you, as it evidently did in Raleigh this weekend, the pressure is on to meet expectations. I’m rooting for Wegmans to maintain its high standards as it advances down the Eastern seaboard.

Braintrust
"They run their company the same way it was done back in the day when the name of the company was typically that of the family running the business."

"Wegmans is the best and for their followers, they will do well anywhere they go."

"...only time will truly tell if the market can support another player or if this is just a short-term attraction because Wegmans is new."