Do consumers want to follow grocers on social media? 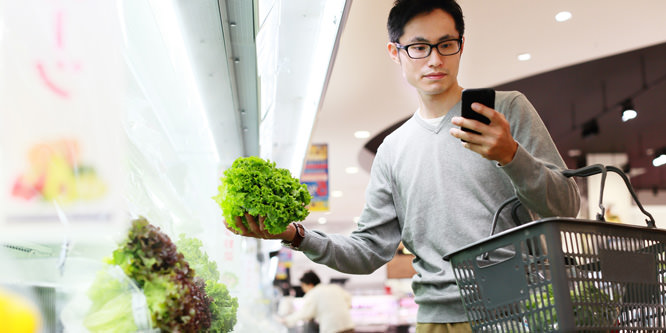 A new survey from Retail Feedback Group finds that while 87 percent of supermarket shoppers report regularly engaging with one or more social media sites, just 25 percent indicate they are “friends” or similarly connected to their primary grocery store.

Surveys appear to be all over the place regarding how many consumers want to be with retailers on social media, although that may have to do with differences in defining what it means to “follow” a brand or retailer.

However, Interactions Marketing’s 2015 report, “Social Media: Invest to Impress,” found that 50 percent of respondents were following grocers, second only to restaurants, at 63 percent. Among other retail channels, mass merchandisers were followed by 47 percent of the respondents; electronics stores, 46 percent; department stores, 40 percent; specialty retailers, 33 percent; and drugstores, 25 percent.

Just what are consumers looking for when they connect with retailers? Interactions Marketing’s report found 73 percent want to hear about discounts and promotions; 72 percent want to look for new products; 59 percent like to learn about in-store events; and 39 percent want information about new trends. For grocers specifically, the survey found 59 percent would like grocery stores to share food recipes.

DISCUSSION QUESTIONS: How highly do you rate the social media opportunity for grocers? In what ways may consumers want to engage with food retailers on social media as opposed to other retail channels?

Please practice The RetailWire Golden Rule when submitting your comments.
Braintrust
"The key reason people follow retailers and brands on social media is for reasons of lifestyle projection."

"If consumers become accustomed to anticipating embedded clicks for discounts, recipes or other offers, they will pay some attention. "

15 Comments on "Do consumers want to follow grocers on social media?"

There is more passion for food than ever. There is more interest in social chatter than ever. So why wouldn’t grocers be more popular than ever on social media? Well, a couple are very popular. They are typically not traditional-format grocers, though. They are the ones that have established very compelling brand loyalty. And I’m not describing those mainstream grocers whose frequent-shopper discount program has 99 percent penetration in their transactions. I mean those with real loyalty. Those that shoppers pass by other stores to shop. Those retailers have cracked the code on brand passion and have enthusiastic followers on social channels waiting to see the next recipes, specials, etc. It’s a culture that takes time and leadership commitment to develop.

How can we believe either of these surveys when their results differ so dramatically? Consumers don’t engage with with retailers through social media because there’s little value for their time. Grocer websites, apps and social outreach should be used to provide information (product reviews, recipes, promotions, coupons, etc.). Grocers should link promotions, shopping lists, coupons, check out and loyalty cards to make the shopping experience easier and to save customers’ time. People don’t use grocers’ websites and apps because they are not useful.

The question of following grocers is essentially the same question for most retailers — why would a customer want to follow any single retailer? There have been numerous studies on mobile phone apps. While consumers download dozens, they only use five to seven apps on a weekly basis. Banking apps fall in this top tier, as well as social media like Facebook and Instagram. If a grocer’s app is to break into the top tier of apps that consumers actually use, then it must provide a value-add for the consumer in terms of: loyalty offers/discounts, rich content that is relevant or some kind of engagement that is valued by the customer (e.g. related to a cause or event). Most grocers simply do not spend enough time and resources to be able create enough value-add that consumers will use the app on a regular basis. Would you rather go to a grocer’s app to look at a couple of recipes, or go to Instagram and look at thousands of recipes as well as photos of how… Read more »
0
|
-1
-   Share

Consumers “follow” grocery stores on social media, but don’t pay attention unless the posts are engaging and interesting. Grocery stores are competing for attention with literally hundreds and thousands of other social media posts.

If consumers become accustomed to anticipating embedded clicks for discounts, recipes or other offers, they will pay some attention. However, even more important, social media posts or content needs to be consistently interesting, entertaining or beneficial to create “habit.”

What I see more often are the same clichés and meaningless “me-too” posts that will be habitually ignored. For example, “TGIF from XYZ supercenters,” will be ignored. What is more likely to get attention, for example is, “How can XYZ make its top-rated salad bar even better? Best suggestions will (be rewarded!)” or, “special deals for our followers this weekend!”

I think that the key reason people follow retailers and brands on social media is for reasons of lifestyle projection. Either the consumer is living, or wants to live, the brands ideals. For grocers, this would be things like healthy living and sustainability. With the brand ideals as the backdrop, consumers will become sticky if the social feed is educational, informative, entertaining, will save them time and/or money or is otherwise a utility — very much similarly to why consumers want and keep a mobile app installed.

This is an interesting but puzzling topic. I had never thought of following a particular grocer online. Maybe that is because I live in the state of Publix. My wife has her lists. The specials come out on Thursday and she goes from there. Most grocery shoppers know where to go for what; meats one place, staples another. I do not think social media is going to sway the primary shopper’s opinion.

Any business can benefit from using social media with their customers … as long as they do it the right way. Food retailers can’t just push content. Their strategy needs to segment their customers based on the different needs they have. And, most importantly, rather than just push content, engage with content. Have social conversations. Discuss recipes, new food items, etc. And every once in a while throw in the special that only comes from being connected at that level. When it’s less about promotion and more about the customer, the money will eventually come.

Consumers want to engage with social media because it provides a beautiful, visual forum for storytelling. Currently, it seems like the above study illustrates that consumers are turning to their grocers’ social channels for information, not for stories. Social is a brand channel, so treating it as a way to convey the values and stories your brand stands for rather than as a way to share the latest promo will be tremendously more valuable. Food is an incredibly visual medium that can easily engage consumers, so it’s just about making sure that the content is aligned with what consumers are seeking on each channel, i.e., what you post on Instagram shouldn’t be the same content that appears on Twitter.

The opportunity for grocers in social media is large — it’s where their customers spend the majority of their digital time — but the fact so few consumers follow grocery retailers is probably more representative of the current state of grocers’ efforts on these platforms, not that there’s a lack of interest.

If grocery retailers want to capitalize on the time and attention consumers give these channels, they have to consider what would be valuable to their audience. Although retailers may want to be there to “connect,” consumers are saying they’d most prefer to be alerted to discounts. Start with what your customers want, and then segment out other activities that could be beneficial to different customer groups.

My read is nada. My sample set of data — my family full of social freaks (except me) — reports that no way are they food social. So ponder all you want, but the grocery on your social is just not hip.

Since I don’t believe the results of surveys anymore, I rely on personal experience as my guide.

I have apps for Whole Foods and Market District (a Giant Eagle banner). They are fine, but I can’t say I am eager to engage with these retailers via social media. I check out special events in the stores, but these retailers don’t reach out to me via email, which is what they should do.

Two points to make on social and grocers. Social is, at the end of the day, another channel to build a relationship with customers. It’s a means to an end, not the end itself. Second, customers will “follow” on any channel where they will get real value from the interaction. And it is an interaction shoppers want — not a one way flow of endless discounts. I don’t think we can trust survey results that ask consumers “would you follow brand xyz on social media if they deliver discounts” — who is going to say no to that if you need to invest minimal effort? Everyone wants a discount if you can get it. Grocery brands need to leverage social to build on their loyalty relationship and make the experience better in some way. I don’t believe this will attract new customers to the brand other than by giving loyal customers a reason to talk to their friends about the experiences. But it’s just that — an experience they will talk about. It won’t be… Read more »
0
|
-1
-   Share

Consumers “follow” but do not really follow. They click with the expectation of receiving coupons. There isn’t so much a social media affinity (ala Katy Perry) to a grocer as it is a utilitarian connection — making it all the more important for the grocer to figure out a way to connect to the consumer.

Braintrust
"The key reason people follow retailers and brands on social media is for reasons of lifestyle projection."

"If consumers become accustomed to anticipating embedded clicks for discounts, recipes or other offers, they will pay some attention. "